How much does it cost to travel to Odense?

How much money will you need for your trip to Odense? You should plan to spend around kr900 ($117) per day on your vacation in Odense, which is the average daily price based on the expenses of other visitors. Past travelers have spent, on average, kr286 ($37) on meals for one day and kr245 ($32) on local transportation. Also, the average hotel price in Odense for a couple is kr896 ($117). So, a trip to Odense for two people for one week costs on average kr12,594 ($1,641). All of these average travel prices have been collected from other travelers to help you plan your own travel budget.

A vacation to Odense for one week usually costs around kr6,297 for one person. So, a trip to Odense for two people costs around kr12,594 for one week. A trip for two weeks for two people costs kr25,189 in Odense. If you're traveling as a family of three or four people, the price person often goes down because kid's tickets are cheaper and hotel rooms can be shared. If you travel slower over a longer period of time then your daily budget will also go down. Two people traveling together for one month in Odense can often have a lower daily budget per person than one person traveling alone for one week.


How expensive is Odense? How much money do I need for Odense?

How much does a trip to Odense cost? Is Odense expensive? The average Odense trip cost is broken down by category here. All of these Odense prices are calculated from the budgets of real travelers.

Looking for a hotel in Odense? Prices vary by location, date, season, and the level of luxury. See below for options.

How much does it cost to go to Odense? Naturally, it depends on the dates. We recommend Kayak because they can find the best deals across all airlines.

The price of renting a car in Odense will depends on dates, the type of car, the location, and your age. We recommend Kayak because they can find the best deals across all car rental companies.

Odense On a Budget 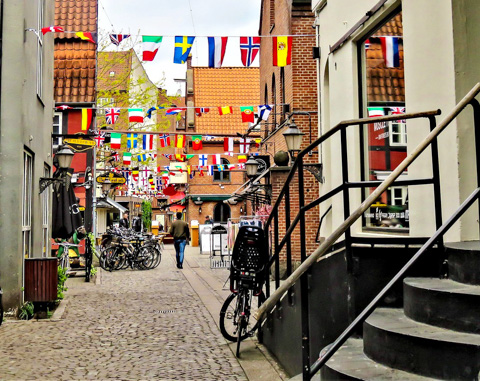 Odense
Odense is the largest city on the island of Funen in Denmark. With a population of over 180,000, it is the third largest city in Denmark as a whole and sometimes is known as the unofficial capital. This city is the birthplace of the famous fairytale writer, Hans Christian Andersen.

Museums are plentiful in the city of Odense. The art center of Odense, Brandts KlÃ¦defabrik, is a sight not to miss. There are two museums in the center; The Danish Museum of Media and The Museum of Photographic Arts. The Carl Nielsen Museum honors the late classical music composer who is also the face of the Danish hundred-kroner note. Another museum is the Danish Railway Museum that contains many old trains and railroad parts. There is also an impressive large model train

The last of the main museums in town is the Hans Christian Andersen Museum. This museum highlights the life and accomplishments of the famous author. You can see his own drawings and paper clippings from his past as well as beautiful period furniture.

For those who aren't keen on visiting museums, there are other sights in the city. The Egeskov Castle is located in Odense and is said to be one of Europe's best-preserved water castles from the Renaissance era. This historic castle dates back to 1554 but has since been revamped with features such as a human maze, a toy museum, and a veteran auto museum.

The Odense Zoo is one of the biggest tourist attractions in Denmark, especially with its new addition, The Oceanium. Saint Knuds Kirke is a great sight and is free to visit. It was the cathedral of King Canute the Holy and his tomb is in the crypt below the church.

Odense is located on the island of Funen, which lies between Jutland and Zealand. It is part of the Southern Denmark region and some of the other large cities on the island are Kerteminde, Svendborg, and Nyborg. Kerteminde, in northern Funen, is known for the small statue of a fisher girl called Amanda. You can also visit the Johannes Larsen Museum, which is built around the home of the artist who was a catalyst in the Fynboerne artists' movement. Svendborg, located in southern Funen, is the home of A. P. MÃ¸ller-MÃ¦rsk, the worlds largest shipping company. Nyborg is on the east coast of the island and is known as a bridge town. It is at the foot of the Great Belt Bridge connecting Funen and Zealand.

Take a tour boat along the Odense Aafart, which leaves from Munke Mose in the city center and stops at the Odense Zoo and in Fruens Boge. This is a great activity in the summer but is also very beautiful during the winter to see the trees sprinkled with snow. The Odense Golfklub is a fun, leisurely activity if the weather permits. For more of a thrill go to Odense Go-Kart-Hal and satisfy your need for speed.

There are usually events or festivals happening in Odense as well. Whether is the Flower Festival, International Film Festival, or Hans Christian Andersen Festival, there is something that is bound to be happening during your visit. Most of the aforementioned festivals happen during the spring and summer time, however, the Christmas markets that are put on in December are incredible to visit.

There is a vast range of food options in Odense in regard to type of cuisine and budget. For a less expensive meal, China Box has delicious Chinese takeout food that is very affordable. Cafe du Nord is another affordable place with Danish cuisine. The best bistro in Denmark is located in Odense. It is called No. 61 and their cookbook is among seven other nominees for the best in the world. Sortebro Kro is more of an upscale restaurant but is recommended by many that visit Odense. It is located in an 18th century Inn and serves proper Danish cuisine.

Odense is the easiest to get to by train. It is about ninety minutes from Copenhagen, one hundred minutes from Aarhus and five hours from Hamburg, Germany. You can fly into the Copenhagen or Billund airport, which are the closest to Odense, and take a train or bus from there to the city center.

One in the city, you can reach many of the main attractions by foot. The exceptions are the Funen Village and the Zoo, which are about 30-45 minute walks from the city center. You can get around by taxi as well, but keep in mind they can be pretty expensive. There are public buses that can take you around and they cost eighteen DKK usually.