How much does it cost to travel to Copan?

How much money will you need for your trip to Copan? You should plan to spend around L1,771 ($71) per day on your vacation in Copan, which is the average daily price based on the expenses of other visitors. Past travelers have spent, on average, L419 ($17) on meals for one day and L1,543 ($62) on local transportation. Also, the average hotel price in Copan for a couple is L887 ($36). So, a trip to Copan for two people for one week costs on average L24,790 ($999). All of these average travel prices have been collected from other travelers to help you plan your own travel budget.

A vacation to Copan for one week usually costs around L12,395 for one person. So, a trip to Copan for two people costs around L24,790 for one week. A trip for two weeks for two people costs L49,580 in Copan. If you're traveling as a family of three or four people, the price person often goes down because kid's tickets are cheaper and hotel rooms can be shared. If you travel slower over a longer period of time then your daily budget will also go down. Two people traveling together for one month in Copan can often have a lower daily budget per person than one person traveling alone for one week.


How expensive is Copan? How much money do I need for Copan?

How much does a trip to Copan cost? Is Copan expensive? The average Copan trip cost is broken down by category here. All of these Copan prices are calculated from the budgets of real travelers.

Looking for a hotel in Copan? Prices vary by location, date, season, and the level of luxury. See below for options.

How much does it cost to go to Copan? Naturally, it depends on the dates. We recommend Kayak because they can find the best deals across all airlines.

The price of renting a car in Copan will depends on dates, the type of car, the location, and your age. We recommend Kayak because they can find the best deals across all car rental companies.

Tips and Handouts Budget in Copan

La CeibaRoatanReviews of The Best Hostels in Honduras

Copan On a Budget 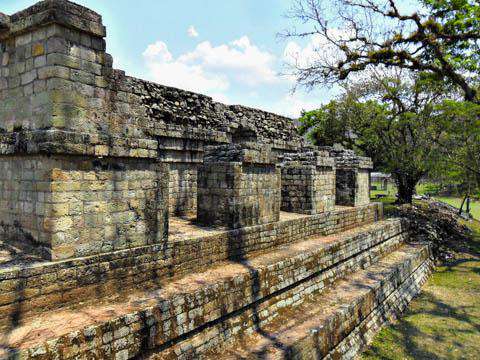 Copan, Honduras
If you are a lover of history, or just really want to tap into your inner Indiana Jones, a trip to Copan, Honduras is right up your alley. Located in western Honduras, the cobblestone lined streets and white adobe buildings topped with red roofs provide the beautiful backdrop to this once powerful city.

Occupied by the Maya for 2,000 years, Copan was the ruling city in the southern Mayan kingdom. Settled nicely in a fertile river valley among rolling hills, this city is absolutely fascinating and the perfect place to explore history.

Hands down, the highlight of Copan is Las Copan Ruinas. The core of this ancient city is 600 by 300 meters of stunning archaeological discoveries. Between the carved constellations and preserved hieroglyphics, there is no shortage of things to see. There are smaller structures and, of course, the Acropolis. Once the royal complex, the Acropolis consists of two plazas and extensive, hieroglyphic-lined tunnels running underneath.

The Hieroglyphic Stairway is believed to represent the most important rulers in the dynastic history of the site. With a total of 62 steps, the stairway is covered in 2200 glyphs that form the longest known Maya hieroglyphic text. And, the Ballcourt is a sculpture built in the year 738, and is dedicated to the great macaw deity.

The Altar Q is the most famous monument at Las Copan Ruinas. The Copan dynasty is carved around its side. Each king is depicted seated on his own name glyph and the order of the carvings visually portrays the political succession of early classic Maya culture.

The Motmot Capstone is a memorial to the first two kings of the Copan dynasty. The inscribed stone placed over a tomb names mythological locations underneath the feet of the two kings â thereby putting them in a supernatural realm.

Take a visit to the Mayan Museum for a deeper look into the history that surrounds you. The museum houses a reconstructed temple and fantastic artifacts.

A word of warning, try to get to Las Copan Ruinas early in the morning as it gets very hot by midday. Also, if you're there near the opening hours, you might catch the guards feeding the macaws. While history buffs can easily make two days last in Las Copan Ruinas, but many people can see the whole place in 2 - 4 hours.

The town that encompasses the ruins is located to the west of the park area, and is home to many restaurants, hotels, and other tourist amenities. Almost everything is a short walk from the center of town.

After you have explored all you can find in the ruins, there are lots of other things to do in Copan.

The Macaw Mountain is a fascinating bird sanctuary set in a gorgeous backdrop of Honduran jungle. There is a swimming hole for a quick chance to cool down, and the birds are brought out for tourists to hold, providing the perfect photo opportunity, around 3 pm.

If the swimming holes just were not enough for you, head over to Luna Jaguar Aguas Termales for the natural hot springs spa. There are several pools of differing temperatures to please any tourist. Be sure to bring your own food!

It wouldn't be Central America without at least one zip-line trip. Copan is a great spot for the zip-lining adventurer given that it has one of the world's longest sip-lines. At 1,000 meters long, this zip-line should be on the top of every thrill-seeker's bucket list.

Or you could take an afternoon to enjoy a leisurely horseback ride from La Pintada to Maya Chorti to Los Sapos â a small ruin not included in the Los Copan Ruinas.

Also, don't miss out on licuados â a water or milk-based fruit smoothie that is well worth the money you'll spend on it every morning.

The city of Copan is very small so getting around is not really a concern. The area is completely walk-able and safe. If the cobblestones make you nervous, or you'd rather not walk, there is a Honduran version of a rickshaw called mototaxis. They'll take you in anywhere in town and are fairly inexpensive.