How much does it cost to travel to Pecs?

How much money will you need for your trip to Pecs? You should plan to spend around Ft23,483 ($65) per day on your vacation in Pecs, which is the average daily price based on the expenses of other visitors. Past travelers have spent, on average, Ft8,574 ($24) on meals for one day and Ft5,166 ($14) on local transportation. Also, the average hotel price in Pecs for a couple is Ft22,110 ($62). So, a trip to Pecs for two people for one week costs on average Ft328,768 ($915). All of these average travel prices have been collected from other travelers to help you plan your own travel budget.

A vacation to Pecs for one week usually costs around Ft164,384 for one person. So, a trip to Pecs for two people costs around Ft328,768 for one week. A trip for two weeks for two people costs Ft657,535 in Pecs. If you're traveling as a family of three or four people, the price person often goes down because kid's tickets are cheaper and hotel rooms can be shared. If you travel slower over a longer period of time then your daily budget will also go down. Two people traveling together for one month in Pecs can often have a lower daily budget per person than one person traveling alone for one week.


How expensive is Pecs? How much money do I need for Pecs?

How much does a trip to Pecs cost? Is Pecs expensive? The average Pecs trip cost is broken down by category here. All of these Pecs prices are calculated from the budgets of real travelers.

Looking for a hotel in Pecs? Prices vary by location, date, season, and the level of luxury. See below for options.

How much does it cost to go to Pecs? Naturally, it depends on the dates. We recommend Kayak because they can find the best deals across all airlines.

The price of renting a car in Pecs will depends on dates, the type of car, the location, and your age. We recommend Kayak because they can find the best deals across all car rental companies.

What did other people spend on Food in Pecs?

Typical prices for Food in Pecs are listed below. These actual costs are from real travelers and can give you an idea of the prices in Pecs, but your costs will vary based on your travel style.

Pecs On a Budget 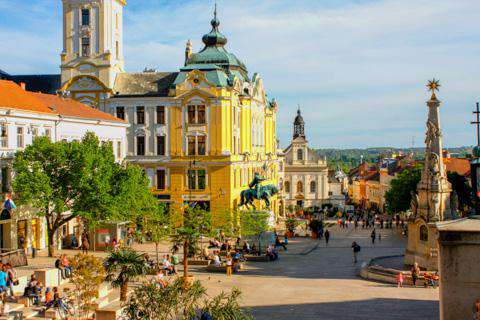 Pecs, Hungary
Located in southwest Hungary, Pecs is a pleasant university town with a history that dates back to Roman times - a history evident in its ancient architecture. Some of the most sought after sites include the Early Christian Necropolis, the Mosque of Pasha Quasim, and the Cathedral of Pecs.

As a Roman city, Pecs was once called Sopianae. Remains from this ancient city are suggested in its early Christian monuments like the Early Christian Necropolis which was designated an UNESCO World Heritage Site in 2000. The site dates back to the 4th century and is the largest necropolis remaining in the European provinces. Seven of the burial chambers are open to the public and are known collectively as Cella Septichora.

The Mosque of Pasha Quasim, located on the main square, is another important landmark to the town. Today the 16th-century structure serves as a Catholic Church, drawing visitors interested in the service as well as to see the decorative frescoes and iconic domed roof.

Additionally, there is the Cathedral of Pecs, which dates back to the 11th century during the time of Peter Orseolo, the second king of Hungary. The design of the building is evident of the Romanesque, Gothic, and Renaissance periods as well as the Turkish conquest when it was in part used for storage. At some point, the church was renovated in Rococo and Classicist styles, but was mostly restored to its envisioned Romanesque origins in the 1880s.

Downtown Pecs is the oldest part of the town with houses which date back to the Middle Ages as well as others designed in the Art Nouveau style. KirÃ¡ly street marks the center of activity as it is the main pedestrian area with plenty of opportunities for dining, shopping, sight-seeing, and entertainment. The main square of the downtown is centered on the domed 16th-century Mosque of Pasha Gazi Quasim. This square is called Szechenyi square and once served as the market place of the town with the city hall and the parish church during the Middle Ages. From here most of the town's historic and cultural sites can be seen on foot or via the local bus service.

Beyond sight-seeing and exploring the town's pedestrian areas, there are also opportunities to shop for handmade gifts and souvenirs unique to the area. Zsolnay Porcelain is one such thing not to miss - usually designed in an Art Nouveau style with vibrant glazes like the green-gold glaze called eosin. Wines from the VillÃ¡ny wine region offer another great sampling to take home from Hungary, perhaps best known for their reds as well as their lesser known Kadarka and Zweigelt varieties. In and around the main square, visitors will find plenty of opportunity to find local craft goods, meander through art galleries, and explore antique stores.

Other activities outside of history and culture include a visit to the Botanical Garden located at the University of Pecs, or a stop at the Zoo which was established in 1960. Additionally, the Pecs TV Tower offers great views of the town and surrounding area from an observation deck.

Cuisine of Hungary is primarily based on meats, seasonal vegetables, fruits, fresh bread, dairy products, and cheeses. Paprika is used generously in cooking and is considered the national spice. Goulash, a soup or stew of meat and vegetables and seasoned with paprika and other spices, is especially popular and common throughout Hungary. Other specialties include stuffed peppers, cabbage rolls, roasted meats, and casseroles, as well as a hot and spicy fish soup called halaszle, a chilled sour cherry soup called hideg meggyleves, and Hungarian crepes called palacsinta which can be stuffed with jam, cheese, raisins, or meat. In Pecs, visitors can find plenty of restaurants along KirÃ¡ly street, which is the main pedestrian area.

By backpackguru in Entertainment
The cathedral square is the second largest square inside the city walls. It spreads out into a park and has a promenade that continues into Szechenyi square. There's also a fountain and a variety of trees and shady areas to relax. The square is built onto a hill and the St. Peter and Paul cathedral sits on the highest end. The park and square offer a wonderful place to relax and enjoy the beautiful outdoor weather.