How much does it cost to travel to Balaton Lake?

How much money will you need for your trip to Balaton Lake? You should plan to spend around Ft25,279 ($68) per day on your vacation in Balaton Lake, which is the average daily price based on the expenses of other visitors. Past travelers have spent, on average, Ft8,013 ($22) on meals for one day and Ft3,454 ($9.32) on local transportation. Also, the average hotel price in Balaton Lake for a couple is Ft28,073 ($76). So, a trip to Balaton Lake for two people for one week costs on average Ft353,911 ($955). All of these average travel prices have been collected from other travelers to help you plan your own travel budget.

A vacation to Balaton Lake for one week usually costs around Ft176,956 for one person. So, a trip to Balaton Lake for two people costs around Ft353,911 for one week. A trip for two weeks for two people costs Ft707,822 in Balaton Lake. If you're traveling as a family of three or four people, the price person often goes down because kid's tickets are cheaper and hotel rooms can be shared. If you travel slower over a longer period of time then your daily budget will also go down. Two people traveling together for one month in Balaton Lake can often have a lower daily budget per person than one person traveling alone for one week.

Looking for a hotel in Balaton Lake? Prices vary by location, date, season, and the level of luxury. See below for options.

How much does it cost to go to Balaton Lake? Naturally, it depends on the dates. We recommend Kayak because they can find the best deals across all airlines.

The price of renting a car in Balaton Lake will depends on dates, the type of car, the location, and your age. We recommend Kayak because they can find the best deals across all car rental companies.

Balaton Lake On a Budget 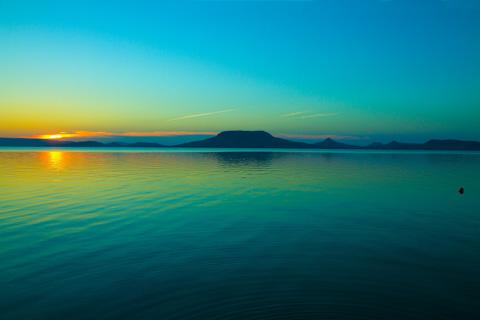 Lake Balaton, Hungary
Balaton is a major freshwater lake in Hungary and the largest lake in Central Europe with a shoreline of 197 kilometers. The region around the lake is a popular holiday destination with a great number of resort towns and high-rise hotels to accommodate visitors seeking out lakeside activities, beaches, volcanic hills, and vineyards. Some of the towns are also very historic, offering examples from eighteenth-century art and architecture to castle ruins.

Lake Balaton is one of the region's leading tourist destinations. The mountainous region of the northern shore, located largely within the bounds of Balaton Uplands National Park, is known both for its historic character and as a major wine region. There are plenty of hiking trails to explore the unique features of these volcanic hills, as well as wine trails to follow a different kind of journey tasting the wines produced by local growers. The flat southern shore is mainly known for its resort towns-the most popular three include Siofok, Keszthely, and Balatonfured. Each town has its own unique features from beaches and nightlife to historic sightseeing and architectural attractions. A few highlights near Balaton include the Lake Cave of Tapolca, Zirc Arboretum, Festetics Palace, and Tihany Abbey.

Listed below are some of the best-known lake towns of Balaton and their major features:

Siofok – situated on the south shore, charming and most popular holiday resort town with peaceful beaches and lively night life

Badacsony – located on the northern coast of Balaton, best-known for its wine

Balatonfured – on the north shore, another resort town like Siofok, though it is more traditional and less commercialized

Szent GyÃ¶rgy-hegy – an area known for its hiking opportunities, like the trail to the Basalt Organ Pipes

The region of Lake Balaton is home to a wide variety of activities. North of the lake there are volcanic hills with opportunities for hiking trails, as well as for exploring vineyards and tasting local vintages. Badacsony Hill, for example, combines the best of both worlds, providing a scenic climb peppered with small wine growers. Visitors can also spend time in Balaton relaxing in thermal spas, the most famous located at Heviz, which is home to Europe's largest thermal lake dotted with water lilies and surrounded by a nature conservation area.

The lake itself is also host to a range of activities. Boating is popular, with several annual sailing races and rentals available. The best rentals can be acquired at Fonyod, Balatonlelle, and Balatonfured. With fairly shallow waters, the lake also has many beaches. Beaches on the north shore typically have more facilities but with an entrance fee, while beaches on the south shore are usually free, though many sections are privately owned by hotels and campsites. In addition to boating and swimming, kite surfing is also popular with visitors.

Cuisine of Hungary is primarily based on meats, seasonal vegetables, fruits, fresh bread, dairy products, and cheeses. Paprika is used generously in cooking and is considered the national spice. Goulash, a soup or stew of meat and vegetables and seasoned with paprika and other spices, is especially popular and common throughout Hungary. Other specialties include stuffed peppers, cabbage rolls, roasted meats, and casseroles, as well as a hot and spicy fish soup called halaszle, a chilled sour cherry soup called hideg meggyleves, and Hungarian crepes called palacsinta which can be stuffed with jam, cheese, raisins, or meat. The Balaton region is a great location for lake fish dishes, such as Fogas (Pike-perch or Zander, a white fleshed fish), Keszeg (bream), Ponty (Carp), and sometimes Harcsa (catfish), which is the base for halaszle (a spicy fish soup).

Budapest is the nearest major city to Balaton, making it a hub for international travel into the general area. Most travelers will arrive via Budapest Franz Liszt International Airport, Hungary's largest airport. Frequent trains from Budapest Deli and Budapest Keleti connect the capital with both shores of Lake Balaton. The journey by train to Siofok will take about 1.5 hours.

There is also a small international airport in Sarmellek, called Heviz Balaton Airport, which is located on the south end of Lake Balaton. It offers flights arriving from many European cities, especially German cities like Berlin, Hamburg, Frankfurt, Dusseldorf, Erfurt, and Leipzig, but also from Moscow, Russia, and Riga, Latvia.