How much does it cost to travel to Kaunas?

How much money will you need for your trip to Kaunas? You should plan to spend around €76 ($81) per day on your vacation in Kaunas, which is the average daily price based on the expenses of other visitors. Past travelers have spent, on average, €30 ($31) on meals for one day and €13 ($14) on local transportation. Also, the average hotel price in Kaunas for a couple is €71 ($75). So, a trip to Kaunas for two people for one week costs on average €1,069 ($1,129). All of these average travel prices have been collected from other travelers to help you plan your own travel budget.

A vacation to Kaunas for one week usually costs around €535 for one person. So, a trip to Kaunas for two people costs around €1,069 for one week. A trip for two weeks for two people costs €2,138 in Kaunas. If you're traveling as a family of three or four people, the price person often goes down because kid's tickets are cheaper and hotel rooms can be shared. If you travel slower over a longer period of time then your daily budget will also go down. Two people traveling together for one month in Kaunas can often have a lower daily budget per person than one person traveling alone for one week.


How expensive is Kaunas? How much money do I need for Kaunas?

How much does a trip to Kaunas cost? Is Kaunas expensive? The average Kaunas trip cost is broken down by category here. All of these Kaunas prices are calculated from the budgets of real travelers.

How much do vacation rentals cost in Kaunas? Prices vary by location, date, size of the place, and the level of luxury. See below for options.

How much does it cost to go to Kaunas? Naturally, it depends on the dates. We recommend Kayak because they can find the best deals across all airlines.

The price of renting a car in Kaunas will depends on dates, the type of car, the location, and your age. We recommend Kayak because they can find the best deals across all car rental companies.

Tips and Handouts Budget in Kaunas

The Best Tours to Riga, LatviaVilniusBest Hostels in Vilnius, Lithuania for Solo Travellers, Couples, and Groups

Kaunas On a Budget 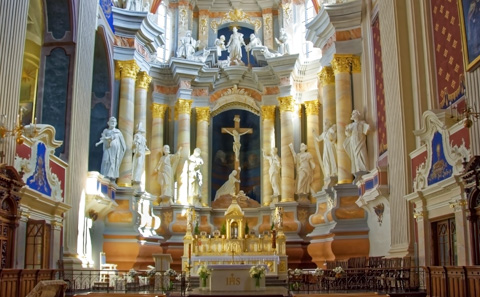 Kaunas
Kaunas is the second biggest city in Lithuania, located at the country's center. It is a city of medieval history as well as modern entertainment with castle ruins, churches, and cathedrals, as well as galleries, museums, theatres, and outdoor recreation.

The oldest building in the city of Kaunas is Kaunas Castle, built in the fourteenth century. The medieval structure is open to guided tours, often hosts cultural events, and its round tower features art and historical exhibitions. Also historic is the Kaunas City Hall, built in the sixteenth century. Overall a nice example of Renaissance architecture, the hall now houses the Kaunas Ceramics Museum in its cellars. The collection includes archaeological findings from the Old Town and surroundings areas of Kaunas.

Another impressive piece of architecture is the Pazaislis Monastery and Church, which form the largest monastery and church complex in Lithuania. The seventeenth-century Baroque structure offers guided tours and also boasts the oldest church clock tower in Lithuania. Flash forward a few centuries, and Kaunas also features an important historic memorial to the Holocaust at Ninth Fort, which is open for guided tours.

Outside of historical sightseeing, Kaunas also has plenty of things to see outdoors. Azuolynas Park, for example, is the largest in the city and the most popular place for a stroll. On the premises is the Lithuanian Zoo Park, which has opportunities for visitors to interacts with animals. Even on the outskirts, visitors can enjoy a natural escape at the Kaunas Botanical Garden or Kaunas Reservoir Regional Park.

The city center, or Centras, of Kaunas is made up of the Old City and the New City, located just to the east of the confluence of the Nemunas and the Neris rivers. Old Town is the oldest part of Kaunas and features many surviving Gothic, Renaissance, and Baroque buildings, built between the fourteenth and seventeenth centuries. Significant features of this area include the town hall, cathedrals and churches, museums, and the pedestrian street known as Laisv?s Aleja, which is lined with many restaurants, cafes, and shops. New Town is located just east of Old Town, and developed later in a rectangular tsar-time structure with parks and open spaces. Features include business centers, hotels, and some shopping centers, as well as a number of universities, museums, theatres, and orchestra. Other surrounding neighborhoods include Zaliakalnis to the north, Sanciai to the east, Aleksotas to the south and Vilijampol? to the west. They are mostly residential with a few attractions.

As far as activities go, there are plentiful options from historical sight-seeing and museum-going to outdoor recreation and theatre, sport, or musical entertainment. Kaunas evens hosts festivals throughout the year in areas such as jazz, modern dance, music, operetta, and shopping. There are a handful of theatres with entertainment ranging from drama or dance to puppetry, symphony, and musical theatre. There are cinemas for movie enthusiast, as well as sports venues for those hoping to immerse themselves in the local athletic culture. Of course, there is also the usual nightlife entertainment at bars and cafes, as well as casinos and dance clubs.

For those visiting during the summer season, there are some beaches on the banks of Nemunas River, shores of Lampedziai Lake, and Kaunas Reservoir.

When visiting Lithuania, there are plenty of national dishes to try. Some of these include potato balls boiled in milk (Bulviniu kukuliu sriuba), a sausage made from potato-stuffed pig intestine (vedarai), meat-and-garlic-stuffed pig stomach (skilandis), potato pancake (bulviniai blynai), curd patties (virtinukai), and dumplings filled with lingonberries (Saltnosiukai). Pork is the most frequently used meat, as well as fish, like pike or perch, which is often baked, stuffed, or made into gefilte fish. Herring, salmon, and smoked fish in general are also popular. Additional favorites include soups like hot or cold borscht (beet soup), cucumber soup, juka (blood soup), sauerkraut soup (made with ham, carrots, onions, and bay leaves), and cabbage soup (made with carrots, ham, onions, sauerkraut, etc.). Soup is commonly served with dark rye bread. Overall, ingredients are local, and many dishes feature Lithuanian harvests of barley, potatoes, rye, beets, greens, berries, and mushrooms. As a major city, Kaunas will have all of these options and more, including European, Oriental, French, Italian, Russian, and other cuisines.

Kaunas also has a train station that operates mostly to other cities within Lithuania and Poland, as well as bus services that operate to and from Riga in Latvia, Tallinn in Estonia, Minsk in Belarus, and Warsaw in Poland.

Train and Bus Prices
The best prices for buses and trains in Lithuania can be found on Omio (formerly GoEuro). They let you search across all train, bus, and plane routes throughout the region.