How much does it cost to travel to Yangon?

How much money will you need for your trip to Yangon? You should plan to spend around MMK105,077 ($50) per day on your vacation in Yangon, which is the average daily price based on the expenses of other visitors. Past travelers have spent, on average, MMK16,300 ($7.76) on meals for one day and MMK4,000 ($1.90) on local transportation. Also, the average hotel price in Yangon for a couple is MMK103,394 ($49). So, a trip to Yangon for two people for one week costs on average MMK1,471,081 ($700). All of these average travel prices have been collected from other travelers to help you plan your own travel budget.

A vacation to Yangon for one week usually costs around MMK735,541 for one person. So, a trip to Yangon for two people costs around MMK1,471,081 for one week. A trip for two weeks for two people costs MMK2,942,163 in Yangon. If you're traveling as a family of three or four people, the price person often goes down because kid's tickets are cheaper and hotel rooms can be shared. If you travel slower over a longer period of time then your daily budget will also go down. Two people traveling together for one month in Yangon can often have a lower daily budget per person than one person traveling alone for one week.


How expensive is Yangon? How much money do I need for Yangon?

How much does a trip to Yangon cost? Is Yangon expensive? The average Yangon trip cost is broken down by category here. All of these Yangon prices are calculated from the budgets of real travelers.

Looking for a hotel in Yangon? Prices vary by location, date, season, and the level of luxury. See below for options.

How much does it cost to go to Yangon? Naturally, it depends on the dates. We recommend Kayak because they can find the best deals across all airlines.

The price of renting a car in Yangon will depends on dates, the type of car, the location, and your age. We recommend Kayak because they can find the best deals across all car rental companies.

Yangon On a Budget 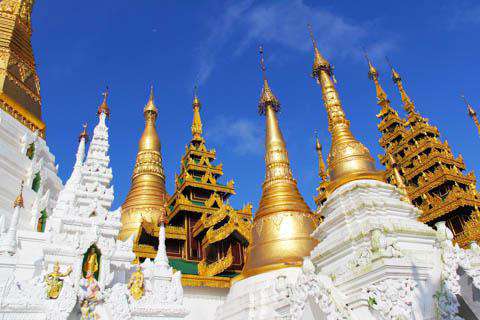 Yangon (Rangoon), Myanmar
Yangon, formerly known as Rangoon, is the largest city and economic center for the nation of Myanmar, formerly known as Burma. The city is a mix of British, Burmese, Chinese, and Indian influences, and is host to beautiful 19th-century colonial architecture as well as modern skyscrapers. The people of Yangon mainly follow the Buddhist religion and it is common to see monks wandering along the busy streets amidst gilded temples.

The centerpiece of Yangon is Shwedagon Paya, a huge pagoda complex that stands on the top of Singuttara Hill. It shines with gilded spires and intricate woodwork that attracts tourists as well as pilgrims who frequently visit the sacred site. As far as dress code goes, those who enter the site must cover their legs and remove any footwear. The pagoda itself has entrances in the four cardinal directions guarded by statues of Burmese lions with walkways, some of which (like the eastern path) are busy with vendors selling goods to visitors. Other religious sites include the Sule Pagoda, Botataung Pagoda, St. Mary's Cathedral, and a synagogue. The Chaukhtatgyi Buddha, a large reclining Buddha statue, is also popular.

Additionally, Yangon has plenty of colonial architecture (more on this in the next section).

If you're looking for even more ideas, here's a great list of things to see and do in Myanmar.

At the heart of Yangon is its bustling downtown and riverfront, where businesses, shopping, and many hotels are centered. This area of the city, at the crossroads of Sule Pagoda Road and Mahabandoola Road, is fairly walkable. The Sule Pagoda, Mahabandoola Garden, an Independence Monument (a large white obelisk in the midst of the garden), are all good landmarks for getting one's bearings in the city. Some of the other popular sights of the downtown include City Hall, the High Court, and the Secretariat. Yangon's riverfront, which runs along Strand Road (known as Kanna Lan in Burmese), is a hub of trading activity and also hosts a number of architectural gems. Some of these colonial buildings include the Yangon Region Court, Custom House, the famous Strand Hotel, and the Myanma Port Authority. The city as a whole is very historic, though there are also centers for shopping as well. Yangon's Chinatown has much to offer in street vendors selling souvenirs, while Bogyoke Aung San Market (or Scott Market) is a great source for Burmese handicrafts.

The golden pagodas of Yangon are very popular and can occupy much of the sightseeing in the city. These and the colonial architecture remaining from the 19th century speak to many years of history. One might spend an entire visit exploring these sights and admiring the religious and colonial structures, however, there are some additional activities to add to the variety of the experience as well. Inya Lake, for example, is the largest lake in the city and is particularly known for its gardens. It is a nice escape from the bustle of city life. Other opportunities to get closer to nature can be found at the Zoological Gardens (known for its animals) as well as the Mahabandoola Garden (known for its roses).

Formerly known as Burma, Myanmar has cuisine that is of the Burmese tradition. It is characterized by an extensive use of fish products like fish sauce and ngapi (a paste made from fermented seafood) as well as rice, fresh vegetables, tropical fruits, and condiments like pickled mango and fermented beans. Some typical dishes include a ginger salad with sesame seeds called gyin thohk, a wheat noodle salad with dried shrimps, shredded cabbage and carrots, dressed with fried peanut oil, fish sauce, and lime (khauk swÃ¨ thoke), and a plate called mohinga which consists of rice vermicelli in fish broth with onions, garlic, ginger, lemon grass, and sliced tender core of banana-stem, served with boiled eggs, fried fish cake (nga hpe) and fritters (akyaw). Due to its geographic location, Myanmar's cuisine has been also been largely influenced by Chinese cuisine, Indian cuisine, and Thai cuisine. All three can individually be found in the city of Yangon as well as other international flavors of the western hemisphere.

From the airport, are available for transportation towards central Yangon. There is also a bus stop located about 15-20 minutes walking distance from the airport.

Visitors can also take a train between Yangon and other parts of Burma. For example, several trains daily connect Yangon to Mandalay via Bago with connections to Bagan and the Inle Lake area at Thazi.

If you're planning a trip here as a family, read this great guide of things to do in Yangon with kids.

Travel tips and things to know before visiting Myanmar