Nizhegorodskaya Oblast', Russia
Europe / Russia /
Due to the ongoing military conflict in the Ukraine, along with sanctions and boycotts, it is not recommended to travel to Russia.

How much does it cost to travel to Nizhny Novgorod?

How much money will you need for your trip to Nizhny Novgorod? You should plan to spend around ₽2,277 ($39) per day on your vacation in Nizhny Novgorod, which is the average daily price based on the expenses of other visitors. Past travelers have spent, on average, ₽710 ($12) on meals for one day and ₽89 ($1.53) on local transportation. Also, the average hotel price in Nizhny Novgorod for a couple is ₽2,957 ($51). So, a trip to Nizhny Novgorod for two people for one week costs on average ₽31,879 ($549). All of these average travel prices have been collected from other travelers to help you plan your own travel budget.

How much do vacation rentals cost in Nizhny Novgorod? Prices vary by location, date, size of the place, and the level of luxury. See below for options.

How much does it cost to go to Nizhny Novgorod? Naturally, it depends on the dates. We recommend Kayak because they can find the best deals across all airlines.

The price of renting a car in Nizhny Novgorod will depends on dates, the type of car, the location, and your age. We recommend Kayak because they can find the best deals across all car rental companies.

Nizhny Novgorod On a Budget 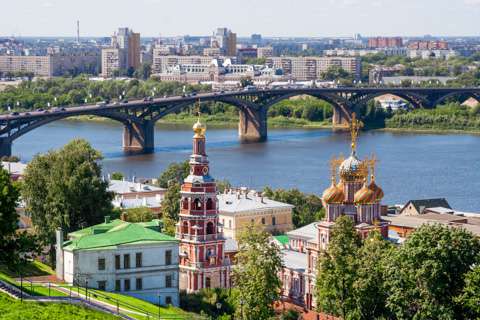 Novgorod, Russia
Nizhny Novgorod, commonly referred to as simply Nizhny, is the fifth largest city in Russia. It has a population of over 1.2 million and it is the primary economic and cultural center for the Volga region. The city dates back to 1221 and it sits at the intersection of the Volga and Oka Rivers. It became popular with tourists back in 1817 when the Makaryev Monastery Fair was moved to the city. The city continued to grow in popularity and by the middle of the 19th century it was a major trade center for the country. During the Soviet Union times the city became an industrial center as trade connections were abandoned.

At the historical center of Nizhny is the Kremlin. There you will find a church, a war monument that has a eternal flame, and an art museum. There are also some good views of the river. You can walk on the wall only between May 1st and October 1st. Museums around town include the House of Writer, Maxim Gorky, the Flat of Andrey Sakhorov, the father of the H-bomb, the Russian Museum of Photography, the Museum of Seam Engines, the Museum of Prison (Nizhegorodsky Ostrog), and the History Museum of GAZ. Famous monuments around town include the monument to Valery Chkalov, a test pilot who flew from Moscow to Vancouver through the North Pole, Maxim Gorky, Alexander Pushkin, and Prince George and Saint Simon of Suzdal.

Nizhny Novgorod is split into two sections by the Oka River. On the eastern sidy is the hilly Upper City and on the western side is the Lower City. The Upper City has three districts which include Nizhegorodsky, Prioksky, and Sovetsky. Nizhegorodsky is at the historical and administrative heart of the city. The Lower City has five different districts. These include Kanavinsky, Moskovsky, Sormovsky, Avtozavodsky, and Leninsky. The city's main train station is located in Kanavinsky. This is also the site of the Nizhny Novgorod Fair.

There are a variety of activities that you can enjoy in Nizhny. There's a new cable car that goes from Nizhny to Bor on the other side of the river. You might have some trouble finding the station but just follow the river until you find the station in a newly built building. Once you get to Bor there want be much to do, but there is a good view so it's worth the trip.

There is a reasonable diversity of food options available around the city. In addition to typical Russian food, there are a good number of international options including Italian, Japanese (with several sushi places) and Chinese, among others. If you're really desperate for some fast food from home, then there are a couple of McDonalds as well. There is one in Gorky Square, one in front of Moskovsky Railway Station, one near Park Kultury of Avtozavod, and one in MEGA shopping Mall. For affordable and decent Russian food head to Goriachy Obed, which is located at the Medical Street Station at Gagarin Prospect. They do close at 4 pm, but they have typical Russian food for a very cheap price.

There are a variety of forms of public transportation in Nizhny including the underground, trams, buses and trolleybuses. The Underground has two lines that cross at the Moskovskaya Station. The first line starts at Burevestnik and the second at Park Kultury. The trams began operation in 1896 and now there are about 30 lines that make their way around the city. Trolleybuses have about 25 lines and buses have around 80 routes that are government operated. There is also a private bus company called marshrutnoe, or marshrutka. They are smaller and do not stop at every stop. If you wish to get off then you must signal to the driver.

A Day Trip to Gorodez

By backpackguru in Entertainment
If you have time to take a day trip outside of Nizhny Novgorod, head to Gorodez. Gorodez is an old town located about thirty kilometers outside of Nizhny Novgorod. It's famous for its wood carvings that have been created in the area for generations. Most of the pieces carved are used in everyday life. There's a museum in the center of town that displays some of the best examples of the art. The town itself is quaint and nice to explore. The homes are quite beautifully decorated and worth seeing on there own.