Saint Petersburg, Sankt-Peterburg, Russia
Europe / Russia /
Due to the ongoing military conflict in the Ukraine, along with sanctions and boycotts, it is not recommended to travel to Russia.

How much does it cost to travel to Saint Petersburg?

Looking for a hotel in Saint Petersburg? Prices vary by location, date, season, and the level of luxury. See below for options.

How much does it cost to go to Saint Petersburg? Naturally, it depends on the dates. We recommend Kayak because they can find the best deals across all airlines.

The price of renting a car in Saint Petersburg will depends on dates, the type of car, the location, and your age. We recommend Kayak because they can find the best deals across all car rental companies.

What did other people spend on Transportation in Saint Petersburg?

What did other people spend on Food in Saint Petersburg?

Saint Petersburg On a Budget 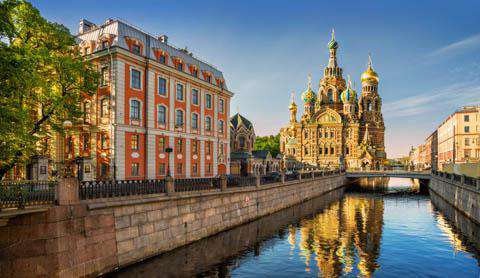 St. Petersburg, Russia
Saint Petersburg is a beautiful city that sits on the eastern edge of the Baltic Sea. Its historical city center is threaded with canals and architecturally impressive buildings, leaving little doubt as to why this city is a UNESCO World Heritage Site. It is the second largest city in Russia, but perhaps a favorite among travelers. The metropolitan area has a population of over 5 million as well as an impressive culture with fascinating museums, restaurants, and architecture. The city has no shortage of sights and attractions, and many days can be passed while you wander its intricate streets.

St. Petersburg has a humid continental climate. It can snow as late as April or even May and it is not uncommon to see sludge that lingers from the melted snow. June is the peak of the tourist season because it is famous for the White Nights when the sun sets for only a short period of time and the streets stay active throughout the night. During the latter part of the month there are performances, concerts, and festivals. The weather is warmest between the months of July and early September. Rain is not uncommon during this time. Winters are cold, but the advantage is that there are almost no tourists during these months. The snow can be beautiful but the temperatures often drop to -25 degrees Celsius with a cold wind chill.

While some of the best experiences in Saint Petersburg involve simply getting lost in the city, there are some true highlights that you shouldn't miss. Definitely make a point of visiting the Hermitage Museum, with its many fascinating items and stories. There is also the Russian Museum, the Peter and Paul Fortress, and the Admiralty which is not open to visitors, but worth viewing from the outside none the less. Also make a point of heading to the astern end of Nevskiy Prospekt next to the River Neva to visit Alexander Nevskiy Monastery. Here you will find Tikhvin Cemetery, which has tombs for some of the world's greatest composers. If you want to see a traditional Russian style church head to the Church of the Saviour on Spilled Blood. It was built on the spot where Tsar Alexander II was assassinated in 1881 and inside you will find some elaborate and impressive mosaics. For more information and details on all of this, check out these travel tips for Saint Petersburg.

There are countless activities and festivals you can enjoy around St. Petersburg. Of particular interest are the opera or ballet. Russia is famous for these arts and the Mariinsky Theater has world class performances regularly. Other options include Mikhailovskiy Theater, St. Petersburg Opera, and the Conservatory Theater. Also look into other music concerts and films while you're in town.

Popular festivals in the city include the White Nights in June, NAVI day in July and New Years, which is the largest holiday in Russia. You can expect large crowds and lots of celebrations at this time of year.

St. Petersburg is also a popular destinations for cruises, especially river cruises. If this is your plan, check out this Viking River Cruises packing list and tips to make sure that you are prepared for your trip.

Food in Saint Petersburg is generally expensive, but there are some cheaper options available. If your accommodation has a kitchen, you could also pick up some groceries and save money by preparing your own meals. One local specialty that you should definitely try is the hot Russian crepes with any of a number of toppings including caviar, mushrooms, caramel, or berries. They are typically served with a cup of tea. If you're in town during the winter, then this is particularly good.

The easiest, and probably the fastest way to travel around Saint Petersburg is by subway. The system is quite impressive and many visitors consider it an experience in and of itself. The stations are often elaborately decorated making it more than just a commuter rail. In the past, patrons were not allowed to take pictures, but recently those restriction have been lifted. It is still best to confirm that photography is allowed before you pull out your camera. The subway is the second largest underground rail system in Russia, after Moscow, and the trains are efficient and frequent. If you have to transfer trains then be prepared for a long walk in between.

The tram provides a better view, but is slower than the subway. The price is cheap but it is not the most efficient way to get around the city. Several lines have recently been removed as well.

Buses and trolleybuses are frequent and cheap. They travel to parts of the city that the metro doesn't cover as well as further into the suburbs. The main routes can become quite crowded, particular during rush hour.

Route taxis offer an efficient way to travel somewhere. They're white or yellow in color and marked with the letter K and the route number. They do not have regular stops so you have to let the driver know when you want off. You can wave one down from the road as well.

By backpackguru in Entertainment
Just outside of Saint Petersburg is the town of Pushkin, also known as Tsarskoye Selo, or the Czar's Village. The town a great place for anyone with a keen interest in Russian history. The most famous structure in town is the baroque Catherine Palace. It's a beautiful buildings and is the place where Empress Catherine the Great resided until she passed away. Although the palace was essentially destroyed during the second world war, it has been extensively restored. The palace has held a museum since 1918. Inside you'll find paintings, porcelain, fabrics, among other goods that reflect life in Russia.

By Sergei in Accommodation
An adorable hostel awash with tiny cool details and cute things. I stayed at Friends on Griboedova, but they have some other location in the center as well – somewhere near Nevsky prospect and on Vosstania street. The one on Griboedova is clean, cosy and very comfortable. The staff is really friendly, they just act as friends – no wonder, since they work at “Friends hostel”. Yes, the famous TV show has something to do with the interior design – brick walls, board games, bicycles and homely atmosphere… Staff speaks very good english and they help you very good. They have dorms and privates. Shared bathrooms, of course. Lots of biscuits, free tea & WIFI. I really recommend Friends hostel to anyone.