How much does it cost to travel to Bratislava?

How much money will you need for your trip to Bratislava? You should plan to spend around €68 ($80) per day on your vacation in Bratislava, which is the average daily price based on the expenses of other visitors. Past travelers have spent, on average, €26 ($30) on meals for one day and €9.08 ($11) on local transportation. Also, the average hotel price in Bratislava for a couple is €60 ($71). So, a trip to Bratislava for two people for one week costs on average €951 ($1,126). All of these average travel prices have been collected from other travelers to help you plan your own travel budget.

A vacation to Bratislava for one week usually costs around €476 for one person. So, a trip to Bratislava for two people costs around €951 for one week. A trip for two weeks for two people costs €1,903 in Bratislava. If you're traveling as a family of three or four people, the price person often goes down because kid's tickets are cheaper and hotel rooms can be shared. If you travel slower over a longer period of time then your daily budget will also go down. Two people traveling together for one month in Bratislava can often have a lower daily budget per person than one person traveling alone for one week.


How expensive is Bratislava?

How much does a trip to Bratislava cost? Is Bratislava expensive? The average Bratislava trip cost is broken down by category here. All of these Bratislava prices are calculated from the budgets of real travelers.

Find a hostel, guesthouse, or B&B in Bratislava

How much does it cost to go to Bratislava? Naturally, it depends on the dates. We recommend SkyScanner because they can find the best deals across all of the airlines.

Bratislava On a Budget

Bratislava, Slovakia
The capital and largest city of Slovakia, Bratislava is set on the shores of the Danube River near the borders of Austria and Hungary. While the city is skirted by mountains and vineyards, its 18th century old town center is crossed with cobbled walkways and surrounded by historic landmarks and architecture. One such monument is the Bratislava Castle, set atop a hill overlooking it all-the old town, the river, and the bustle of people in the charming city below.

When visiting the city, Bratislava Castle is one of the top destinations. With views overlooking the city and the Danube River below, the site really pays homage to the city's medieval past. Other castles worth visiting include the ruins of Devin Castle where the Danube River meets the Morava River as well as the Red Stone Castle just outside the city.

Churches are also a main attraction in Bratislava, St Martin's Cathedral being one of the largest and oldest. Dating back to the early 13th century, the Gothic cathedral was formerly the coronation-church of several Hungarian kings. Other important churches include St. Clare's Church, Church of the Annunciation, and the Church of the Holy Savior.

Michael's Gate with its accompanying tower is another significant landmark, built in the 14th century as one of the four gates into the city. The Slavin monument is another outstanding example, though more recent. It stands high on the hill behind Bratislava Castle as a memorial to Soviet casualties in the liberation battle of Bratislava in World War II.

Other notable sights include the Old Town Hall, Maximillian's Fountain, the Presidential Palace and gardens, plus a handful of museums and galleries dedicated to the culture and history of the region.

The inner city of Bratislava has a medieval past with narrow, winding streets, a hilltop castle overlooking the river, charming squares, and many historic churches and buildings. This is the Old Town, the historic center of the city, which in addition to some of the city's best architecture is also full of lively bars and cafés. Many visitors enjoy exploring the cobbled pedestrian streets, seeing history at every turn, and getting lost in a world of another time and place.

Strolling through the city on foot is perhaps one of the most popular activities, especially since the Old Town district is entirely pedestrian. Visitors enjoy getting lost along the winding cobbled paths, and finding architectural gems around every bend. There is also a multitude of cafés, bars, and restaurants to indulge in as well as a handful of shops and boutiques for your souvenir shopping. In addition to some of the top sights mentioned earlier, many people also enjoy visiting the Bratislava Zoo and the Botanical Gardens of Comenius University for a little escape into the peace and quiet of greenery. There are also a number of parks throughout the city with public picnic areas.

Other activities include guided tours, traditional markets, gallery and museum visits, as well as music, ballet, opera, and theatre performances.

Bratislava is a city where you can find just about everything in food, from traditional Slovak dishes to modern international cuisine. Most Slovak dishes use items such as pork, poultry, cabbage, wheat and potato flour, cheese from cows and sheep, potatoes, onions, and garlic. Meals are often served with vegetables or fruits like apples, plums, apricots, peaches, or cherries on the side. A few authentic options might include potato dumplings with sheep cheese and roasted bacon, a variety of potato pancakes, cheese fried in breadcrumbs, and Wiener schnitzel. As far as drinking goes, the Slovak people favor beer, wine, and traditional libations like Slivovica (made from plums) and Borovicka (made from juniper berries). There are a good variety of restaurants in Old Town, or down by the Danube promenade where there are more options in Riverpark or Eurovea.

By plane, Bratislava Airport is the largest in the Slovak Republic with most flights being operated by the budget airline Ryanair to destinations in the United Kingdom, Ireland, France, Spain, Italy, and Belgium. Other services include Danube Wings flying to Kosice, Rijeka, Split and Zadar; Czech Arlines to Prague and Kosice; Norwegian Air Shuttle to Oslo and Copenhagen; UTair to Moscow, Air Onix to Kiev, and Sun d'Or to Tel Aviv. At the airport there is a direct bus service operating hourly to the Vienna airport and the city of Vienna.

After leaving the terminal, public transportation is available. Visitors can take a bus to the Main Railway Station, from which it is 15-20 minute walk south to the city center of Bratislava.

You can also take a taxi from the airport to the city center, which is usually inexpensive.

By train, most international trains stop at the main train station (Bratislava hlavna stanica) which has a good connection to buses. Trains offer connections to cities like Vienna, Prague, Berlin, Budapest, Warsaw, Kiev, Minsk, and Moscow.

By bus, coach lines connect Bratislava with all of Slovakia, a high number of Czech cities and a number of European destinations including London, Paris, Budapest, Prague, and most commonly Vienna.

Train and Bus Prices
The best prices for buses and trains in Slovakia can be found on Omio (formerly GoEuro). They let you search across all train, bus, and plane routes throughout the region. 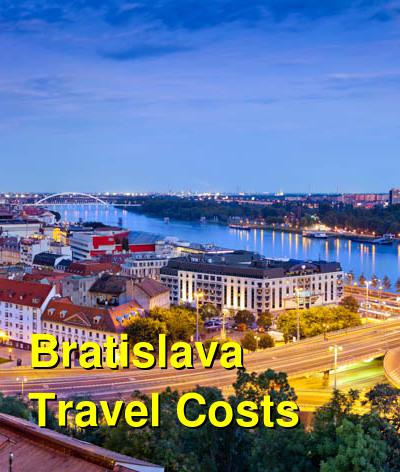 By backpackguru in Food
It's surprisingly hard to find a traditional Slovak restaurant in Bratislava. Far more common are Italian, Chinese, Mexican, Indian and restaurants. The best place to find some traditional fare is to find a Slovak Pub. Alternatively, if you're looking to spend a little more money you can go to an expensive Slovak Restaurant. The best place to head is Hviezdoslavovo square. One place worth checking out that's relatively new is the Pressburg restaurant in Michalska street. It's pricing are reasonable (mid-range, or slightly higher).

If you're looking for something quicker, there's definitely the option for Slovakian Fast Food. A richman is popular and is a big roll of bread filled with cabbage and cheese, or perhaps meat and mayonnaise. Richmans can be bought at stands on Kamenné námestie, in front of the Tesco building, or in Safarikovo square.