How much does it cost to travel to Uganda?

How much money will you need for your trip to Uganda? You should plan to spend around USh178,996 ($49) per day on your vacation in Uganda, which is the average daily price based on the expenses of other visitors. Past travelers have spent, on average, USh20,712 ($5.63) on meals for one day and USh7,500 ($2.04) on local transportation. Also, the average hotel price in Uganda for a couple is USh261,324 ($71). So, a trip to Uganda for two people for one week costs on average USh2,505,947 ($682). All of these average travel prices have been collected from other travelers to help you plan your own travel budget.

A vacation to Uganda for one week usually costs around USh1,252,974 for one person. So, a trip to Uganda for two people costs around USh2,505,947 for one week. A trip for two weeks for two people costs USh5,011,895 in Uganda. If you're traveling as a family of three or four people, the price person often goes down because kid's tickets are cheaper and hotel rooms can be shared. If you travel slower over a longer period of time then your daily budget will also go down. Two people traveling together for one month in Uganda can often have a lower daily budget per person than one person traveling alone for one week.


How expensive is Uganda? How much money do I need for Uganda?

How much does a trip to Uganda cost? Is Uganda expensive? The average Uganda trip cost is broken down by category here. All of these Uganda prices are calculated from the budgets of real travelers.

Find a hostel, guesthouse, or B&B in Uganda

Typical prices for Food in Uganda are listed below. These actual costs are from real travelers and can give you an idea of the Food prices in Uganda, but your costs will vary based on your travel style.

Typical prices for Transportation in Uganda are listed below. These actual costs are from real travelers and can give you an idea of the Transportation prices in Uganda, but your costs will vary based on your travel style.

Tips and Handouts Budget in Uganda

Uganda On a Budget 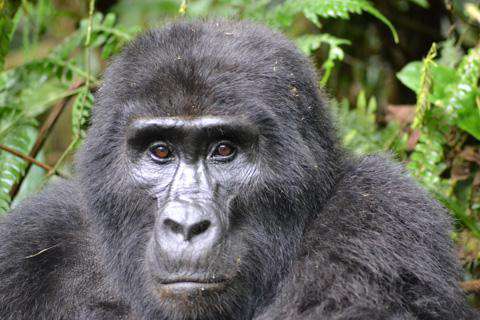 Uganda
Located in East Africa, Uganda is bordered by Kenya, South Sudan, the Democratic Republic of the Congo, Rwanda, and Tanzania. The country is known for its very diverse plant and animal life and is most famous as home to the endangered mountain gorilla as well as the endangered common chimpanzee.

Foreigners, specifically caucasians, are referred to as muzunga or wazungu in the plural form. This term is commonly called out by children when they see visitors. It is not an insult and a proper response is either to ignore it or respond with a friendly wave.

Uganda is not an expensive country to visit, but the facilities are not what you might expect in neighboring Kenya or Tanzania, as tourism is not as common. Your best approach is to relax and go with the flow. Understand that schedules mean little, roads are in poor condition, and part of the experience is to learn to let things go and stay flexible.

While most visitors come to the country specifically for a gorilla safari, there are many other things to see in Uganda, so don't limit yourself. Other highlights include wildlife such as the chimpanzees, hiking the Rwenzoris and visiting the source of the Nile River.

Uganda's climate is affected by altitude, although the country is equatorial. In general, southern Uganda is wetter throughout the year. On the northern shore of Lake Victoria, most of the rain comes between March and June and November and December. Near the South Sudanese border there is a dry period between November and February. Droughts are not uncommon in the northeastern part of the country and Rwenzori in the southwest is prone to rain year around.

Gorilla Trekking: To go Gorilla Trekking you'll need to buy a permit well in advance. There is limited availability and only a few tourists are taken to the gorillas each day. This is done in an effort to limit the stress put on the animals. If you have a permit, you will have one hour to see the endangered mountain gorillas in their natural habitat. Permits can be purchased through the Uganda Wildlife Authority. Prices continue to rise so you should contact the UWA for the most recent price.

Whitewater Rafting on the Nile: Uganda offers adventure travelers world class whitewater rafting on the Nile. You can choose between anything from a half day to 2 day trips. You can also choose your intensity level, from peaceful family trips to grade 5 rapids.

Queen Elizabeth National Park: This is Uganda's most visited national park. It is located in western Uganda and covers almost 2,000 square kilometers. It is famous for its wildlife, which was greatly effected by the Uganda-Tanzania War. Many species have now recovered including the hippopotami, elephants, leopards, lions and chimpanzees.

Ugandan cuisine has been influenced by English, Arab and Indian cooking. There are regional specialties and many tribes have their own unique dish. In general, dishes include some type of vegetable, potatoes, yams, bananas or another tropical fruit. Common meats are chicken, fish, beef, goat, and mutton, although in rural areas meat is less common.

Luwombo: This staple in Uganda is a meat or groundnut sauce that is steamed in banana leaves. It has a strong aroma and is usually served with some form of a carbohydrate.

Posho: This is usually made with maize but may be found with other starches. It is cooked with water until it makes a porridge or dough. It is often served with some sort of meat or sauce and is a staple in the country.

Whole Fried Fish : This is a delicious meal option that is usually available near the beach. It is typically served with some form of french fries (chips).