How much does it cost to travel to Graz?

How much money will you need for your trip to Graz? You should plan to spend around €89 ($93) per day on your vacation in Graz, which is the average daily price based on the expenses of other visitors. Past travelers have spent, on average, €26 ($27) on meals for one day and €14 ($15) on local transportation. Also, the average hotel price in Graz for a couple is €107 ($112). So, a trip to Graz for two people for one week costs on average €1,250 ($1,301). All of these average travel prices have been collected from other travelers to help you plan your own travel budget.

A vacation to Graz for one week usually costs around €625 for one person. So, a trip to Graz for two people costs around €1,250 for one week. A trip for two weeks for two people costs €2,499 in Graz. If you're traveling as a family of three or four people, the price person often goes down because kid's tickets are cheaper and hotel rooms can be shared. If you travel slower over a longer period of time then your daily budget will also go down. Two people traveling together for one month in Graz can often have a lower daily budget per person than one person traveling alone for one week.


How expensive is Graz? How much money do I need for Graz?

How much does a trip to Graz cost? Is Graz expensive? The average Graz trip cost is broken down by category here. All of these Graz prices are calculated from the budgets of real travelers.

Looking for a hotel in Graz? Prices vary by location, date, season, and the level of luxury. See below for options.

How much does it cost to go to Graz? Naturally, it depends on the dates. We recommend Kayak because they can find the best deals across all airlines.

The price of renting a car in Graz will depends on dates, the type of car, the location, and your age. We recommend Kayak because they can find the best deals across all car rental companies.

Graz On a Budget 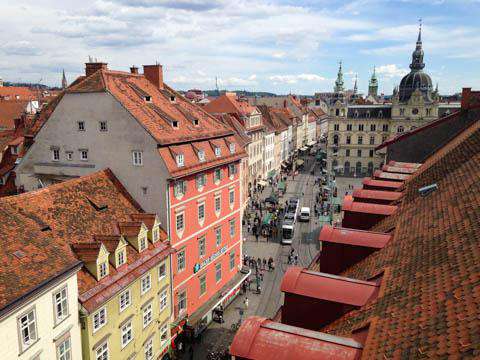 Graz, Austria
Graz is the second largest city in Austria and the capital of Styria. The city has at least six different universities, and a large portion of the city's population is actually made up of students.

Many of the main attractions in Graz are found in the city's old town, which has been declared a UNESCO World Heritage Site. There are also several sights elsewhere in town and even in the surrounding area.

Popular places to visit include the Cathedral of Graz, the Burg, which is a castle built in the 1400s with an impressive double spiral staircase, Eggenberg Castle, the clock tower, the Joanneum Museum of Styria, and the Opera House.

There are some beautiful churches spread throughout the city. The oldest one is the Leechkirche and the highest one is the Herz-Jesu-Kirche. It was designed by the architect Georg Hauberrisser in a Gothic Revival style. There are some Baroque churches on the other side of the Mur River.

Shopping is a fun activity in Graz as well and one popular purchase is the unique pumpkin seed oil the area is famous for. The best place to purchase this is at the Kaiser-Josef-Platz market or any other farmers market. Some other great markets around town include the shopping street of Herrengasse, Steirerhof, and the City Park Shopping Mall.

Graz is divided into 17 districts. Innere Stadt is the old town and has been declared a UNESCO World Heritage Site. Other districts of interest include St. Leonhard, Geidorf (where you'll find the University of Graz), Lend, Gries, and Jakomini.

The city's large student population means it has a very lively nightlife. Many of the area's bars are centered around the old town as well as the Karl-Franzens-University area. In the university area you'll find most of the bars frequented by students, but in the old town area there is more diversity. Both areas are appealing for their own reasons.

Other activities around town include climbing up the SchloBberg and enjoying a meal in the fresh air at the top, visiting the ruins of the Gosting castle, or taking a boat on the Hilmteich or Thalersee. Plenty of other activities can be found, too, even if you only have 24 hours in Graz.

There are many great restaurants around town for all budgets. You'll easily get the best deal at lunch when there are usually specials available such as the dish of the day, referred to as "Tagesempfehlung". Other cheap options around town include places that sell kebabs or various street stalls. There are some good kebab places on Jakominiplatz, Dietrichsteinplatz, and Hauptplatz. There's also a supermarket in the Hauptbahnhof where you can pick up some food for cheap. This is the only grocery store open on Sunday.

You can generally wander around the city's old town on foot. The old town is also about a twenty minute walk from the main train station. You can pick up a map or any other information you need at the information center in the train station upon arrival. Most hotels also have plenty of information and brochures available as well. If you're going a further distance or don't feel like walking, your other options include buses, trams, or taxis.

The tram service is quite good. Tickets are available on an hourly, daily, weekly or monthly basis. Where trams do not run, buses provide a good alternative. Buses generally go through Jakominiplatz, Hauptbahnhof. Tram and bus tickets are interchangable. Taxis are relatively easy to find and you can wave one down from the street. It's also possible to call ahead. It's best not to take a taxi during rush hour, as the traffic congestion will make the rates outrageously expensive.

Biking is very common in Graz and the city has a great network of bike paths. It's possible to rent a bike or you might even consider buying one used if you're going to be in town for a while. Make sure you watch out for trams and traffic and pick up a map of the routes before you head out.

By backpackguru in Entertainment
Visit Graz in the summer and you can join the locals in visiting the AIMS Recital and Concert Series. Every year this program, one of the best of its kind, brings together opera singers and concert performers for a wonderful festival and series of concerts. The events take place throughout the city in castles, churches, courtyards, and of course concert halls. A the end of the series there is the famous Meistersinger Vocal Competition, complete with a full orchestra.

If you can be in town for these events, it's definitely not to be missed.