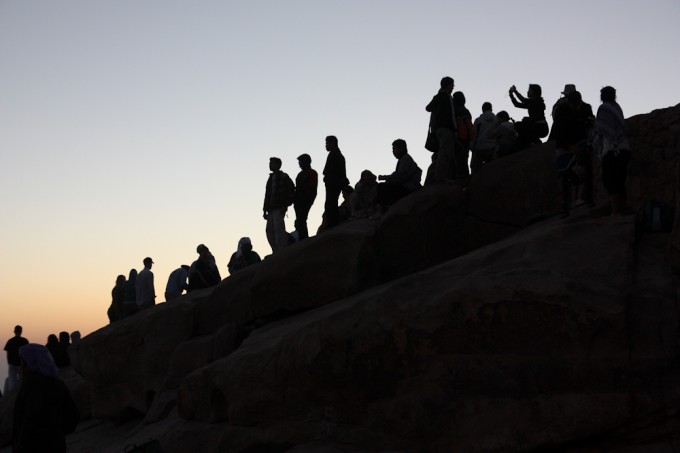 The Sinai Peninsula of Egypt is truly a fascinating place. During our time in the area, we spent a few days near Mt. Sinai and a few more relaxing on the coast of the Red Sea. First, our journey took us from Cairo on a fairly long bus ride to the town of Katreen, near the base of Mt. Sinai and St. Katherine’s Monastery. We slept at a small Bedouin camp and met some other travelers who had hiked to the top of the mountain the night before, starting at 2:00 in the morning. Supposedly this was the best time to hike in order to avoid the heat and also see the sunset from the top of the mountain. We had planned to hike up, but this new twist added a bit of a debate. We really wanted to sleep late, and two in the morning seemed more like a time to go to bed, not a time to get out of bed.

Eventually we decided to go for it, woke up early, and made the journey in the dark of night. We arrived at the top about half an hour before sunrise. The scenery was stunning. The surrounding mountains were oddly shaped and various shades of red and brown – it was like a scene from another planet. Hiking down was much faster, and we were able to see more of the land this time since our hike up was in the dark. Finally, at the bottom we saw the monastery and the famous burning bush although it was not still burning. It has a “No Smoking” sign next to it.

The next day we took a shared taxi through the other-worldly desert of Sinai to the coastal town of Dahab on the Red Sea. The brown rocky mountains plunge into crystal clear water, and on the edge is this small backpacker-oriented town with cheap hotels and non-Egyptian restaurants. It doesn’t feel like Egypt at all, but it was fun and relaxing. You can step into the shallow and clear water, put your mask on, and see thousands of colorful fish and coral. Although desolate mountains surrounded us, the sea was teeming with life. It was the most pristine underwater environment we’ve ever seen. It puts the waters of Southeast Asia and the Caribbean to shame. The Red Sea should be renamed, because it is anything but red.

During our time in Dahab we took a camel trek up the coast to a small Bedouin camp site. This allowed us to escape the tourists and banana pancake restaurants for a little while and enjoy the scenery. We rode the camels along the shore, and at one point mine decided to take a detour and plunged into the shallow water. Its long legs kept me clear above the water, but it seemed to be enjoying its bath nonetheless.

Eventually we took a bus to the relatively hassle-free border with Israel, thus ending our Sinai adventure.

One thought on “Photo Friday: Sinai”