A Travel Price Comparison for New Zealand Auckland vs. Picton for Vacations, Tours, and Honeymoons

Should you visit Auckland or Picton?

Which city is more affordable and which is best for your travel style? If you're trying to figure out where to go next, comparing the travel costs between Auckland and Picton can help you decide which place is right for you.

Where Should I go: Auckland or Picton?

Auckland is located on the North Island of New Zealand on an isthmus between the Northland Peninsula and the other parts of the North Island. Auckland is not only a city but also a region. In 2010 New Zealand combined what had previously been four separate cities into one region. These cities include the southern city of Manukau, the western city of Waitakere, the North Shore in the north, and Auckland City. The City of Auckland is the largest city in Polynesia and is very diverse with many expatriates from elsewhere in Polynesia. This diversity becomes most apparent in Auckland's many festivals and sporting events.

Picton, New Zealand is located in the picturesque Marlborough Region on the South Island. With beachfront access in a central location and near the Marlborough Sounds, Picton is an ideal place for anyone looking for both adventure and relaxation in one of the most naturally beautiful countries in the world.

The weather in Picton is fairly mild, ranging from the low fifties to high sixties, Fahrenheit, throughout the year. Their summer months are December through March, this is when you'll find temperatures in the high sixties. During the winter, June through August, Picton experiences averages of fifty degree Fahrenheit. This means you can visit any time of the year without having to worry about weather inhibiting any of your outdoor activities!

Which city is cheaper, Picton or Auckland?

The average daily cost (per person) in Auckland is $108, while the average daily cost in Picton is $67. These costs include accommodation (assuming double occupancy, so the traveler is sharing the room), food, transportation, and entertainment. While every person is different, these costs are an average of past travelers in each city. What follows is a categorical breakdown of travel costs for Auckland and Picton in more detail.

Compare Hotels in Auckland and Picton

Looking for a hotel in Auckland or Picton? Prices vary by location, date, season, and the level of luxury. See below for options and compare which is best for your budget and travel style.

Below are a few samples from actual travelers for transportation costs in Auckland:

Hired Cars and Shuttles in Auckland

Also for Auckland, here are a few examples of actual transportation services:

Hired Cars and Shuttles in Picton

Some specific examples of transportation prices in Picton:

Is it cheaper to fly into Auckland or Picton?

Prices for flights to both Picton and Auckland change regularly based on dates and travel demand. We suggest you find the best prices for your next trip on Kayak, because you can compare the cost of flights across multiple airlines for your prefered dates.

For Auckland, here are some examples of average food and meal prices for travelers:

For Auckland, here are some samples of tours and activities related to meals and dining experiences:

Below are a few sample prices from actual travelers for Auckland's activities, tours, and tickets:

Tours and Activities in Auckland

For Auckland, here are a few prices for actual activities, tours, and tickets provided by various companies:

Tours and Activities in Picton

Some specific costs of activities, tours, and entrance tickets for Picton are as follows:

Sample the Local Flavors in Auckland

Also in Auckland, these are the prices for nightlife and alcohol related activities from various tour providers:

Sample the Local Flavors in Picton

Here are a few nightlife and alcohol tours and activities from local tour providers in Picton:

When we compare the travel costs of actual travelers between Auckland and Picton, we can see that Auckland is more expensive. And not only is Picton much less expensive, but it is actually a significantly cheaper destination. So, traveling to Picton would let you spend less money overall. Or, you could decide to spend more money in Picton and be able to afford a more luxurious travel style by staying in nicer hotels, eating at more expensive restaurants, taking tours, and experiencing more activities. The same level of travel in Auckland would naturally cost you much more money, so you would probably want to keep your budget a little tighter in Auckland than you might in Picton.


When is the best time to visit Auckland or Picton?

Should I visit Auckland or Picton in the Summer?

The summer brings many poeple to Auckland as well as Picton.

In the summer, Auckland is a little warmer than Picton. Typically, the summer temperatures in Auckland in January are around 20°C (68°F), and Picton is about 18°C (64°F).

Auckland usually gets more rain in January than Picton. Auckland gets 67 mm (2.6 in) of rain, while Picton receives 61 mm (2.4 in) of rain this time of the year.

Should I visit Auckland or Picton in the Autumn?

Both Picton and Auckland are popular destinations to visit in the autumn with plenty of activities.

In April, Auckland is generally a little warmer than Picton. Temperatures in Auckland average around 16°C (61°F), and Picton stays around 15°C (58°F).

In April, Auckland usually receives more rain than Picton. At this time of the year, Auckland gets 95 mm (3.7 in) of rain, while Picton receives 82 mm (3.2 in) of rain.

Should I visit Auckland or Picton in the Winter?

Both Picton and Auckland during the winter are popular places to visit.

Auckland is a little warmer than Picton in the winter. The temperature in Auckland is usually 11°C (52°F) in July, and Picton stays around 10°C (49°F).

Should I visit Auckland or Picton in the Spring?

The spring attracts plenty of travelers to both Auckland and Picton.

In the spring, Auckland is a little warmer than Picton. Typically, the spring temperatures in Auckland in October are around 14°C (58°F), and Picton is about 13°C (55°F).

In October, Auckland usually receives less rain than Picton. At this time of the year, Auckland gets 83 mm (3.3 in) of rain, while Picton receives 93 mm (3.7 in) of rain.

Typical Weather for Picton and Auckland

The Best Hostels in Picton and the Queen Charlotte TrackAucklandDunedinTaurangaRotoruaNelson 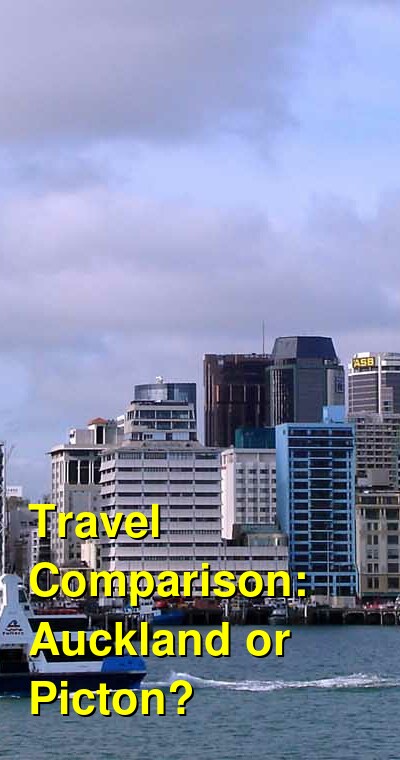