How much does it cost to travel to Auckland?

How much money will you need for your trip to Auckland? You should plan to spend around NZ$187 ($108) per day on your vacation in Auckland, which is the average daily price based on the expenses of other visitors. Past travelers have spent, on average, NZ$36 ($20) on meals for one day and NZ$21 ($12) on local transportation. Also, the average hotel price in Auckland for a couple is NZ$237 ($136). So, a trip to Auckland for two people for one week costs on average NZ$2,622 ($1,506). All of these average travel prices have been collected from other travelers to help you plan your own travel budget.

A vacation to Auckland for one week usually costs around NZ$1,311 for one person. So, a trip to Auckland for two people costs around NZ$2,622 for one week. A trip for two weeks for two people costs NZ$5,243 in Auckland. If you're traveling as a family of three or four people, the price person often goes down because kid's tickets are cheaper and hotel rooms can be shared. If you travel slower over a longer period of time then your daily budget will also go down. Two people traveling together for one month in Auckland can often have a lower daily budget per person than one person traveling alone for one week.


How expensive is Auckland? How much money do I need for Auckland?

How much does a trip to Auckland cost? Is Auckland expensive? The average Auckland trip cost is broken down by category here. All of these Auckland prices are calculated from the budgets of real travelers.

Looking for a hotel in Auckland? Prices vary by location, date, season, and the level of luxury. See below for options.

How much does it cost to go to Auckland? Naturally, it depends on the dates. We recommend Kayak because they can find the best deals across all airlines.

The price of renting a car in Auckland will depends on dates, the type of car, the location, and your age. We recommend Kayak because they can find the best deals across all car rental companies.

What did other people spend on Transportation in Auckland?

Typical prices for Transportation in Auckland are listed below. These actual costs are from real travelers and can give you an idea of the prices in Auckland, but your costs will vary based on your travel style.

What did other people spend on Food in Auckland?

Typical prices for Food in Auckland are listed below. These actual costs are from real travelers and can give you an idea of the prices in Auckland, but your costs will vary based on your travel style.

What did other people spend on Entertainment in Auckland?

Typical prices for Entertainment in Auckland are listed below. These actual costs are from real travelers and can give you an idea of the prices in Auckland, but your costs will vary based on your travel style.

Tips and Handouts Budget in Auckland

Auckland On a Budget 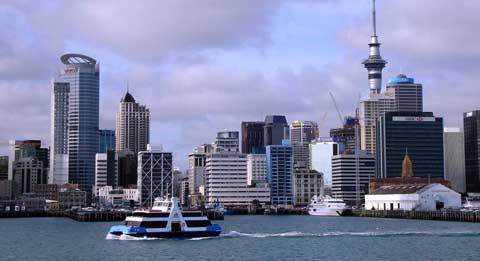 Auckland, New Zealand
Auckland is located on the North Island of New Zealand on an isthmus between the Northland Peninsula and the other parts of the North Island. Auckland is not only a city but also a region. In 2010 New Zealand combined what had previously been four separate cities into one region. These cities include the southern city of Manukau, the western city of Waitakere, the North Shore in the north, and Auckland City. The City of Auckland is the largest city in Polynesia and is very diverse with many expatriates from elsewhere in Polynesia. This diversity becomes most apparent in Auckland's many festivals and sporting events.

Auckland is both the "City of Sails" and the "City of Volcanoes". The title as the "City of Sails" comes from the many yachts that can be found in the Waitemata Harbour as well as the Hauraki Gulf. It's many volcanoes, all of which are extinct, define its natural landscape. There are about 48 volcanoes that make up the Auckland Volcanic Field.

Auckland's climate is temperate and temperatures remain moderate throughout the year. The summer season is between December and March. This is when the sun is at its peak and temperatures are warmest. Between the months of April and June temperatures become cooler and rain is quite common from the end of June through October.

Some of the most interesting sights in Auckland include the Auckland War Memorial Museum, Sky Tower, Auckland Regional Botanic Gardens, and Otara Flea Market. The Auckland Zoo, the StarDome Observatory, and the Auckland Art Gallery are all worth a visit as well. Clearly, you'll find plenty of activities here, and you should plan to spend at least a day, if not two or three in this amazing city. Auckland is usually the start of a New Zealand itinerary for these reasons, too.

Also consider doing a trip to the Waitakere Ranges, about a forty five minute drive from the city. This scenic drive begins in Titirangi and follows a beautiful coastline. You will see impressive waterfalls and some beautiful beaches. The town of Titirangi is an artistic suburb with many art galleries and cafes, making for a nice place to stop.

There are a variety of different neighborhoods around Auckland. The Inner City, or the central business district, has the majority of the city's hotels and attractions. This is also where you'll find Viaduct Harbour. Ponsonby is a trendy cafe and artist's neighborhood about five minutes west of the central business district. This area also has lots of boutique shopping. Newmarket is the main shopping district with both local designers and international chains. Devonport is a seaside suburb on the North Shore with a quaint village atmosphere. Mt Eden offers a great view from the top of the mountain. St Lukes is a large mall with a movie theatre, bars, and restaurants.

There are many activities that you can enjoy in Auckland. Whether you're an outdoor enthusiast or looking for something a little more cultural, then you'll likely find something you enjoy. For sports lovers there are cricket or rugby matches at Eden Park. For adrenaline junkies, do a Sky Jump from the Sky Tower or try the Sky Walk, which is a 1.2 meter wide walkway that is 92 meters above the ground and has no hand rails. For more ideas, check out this guide to things to do in New Zealand which lists plenty of activities in the area.

And why not just relax at the beach. Auckland has plenty around so find a good spot to spend the day at one of Auckland's 25 best beaches, as the weather is warm for most of the year.

Auckland has an extensive selection of dining options that ranges from budget friendly to high end fine dining. For the cheapest options, head to a food court where you can find affordable Asian food or fast food. There are also many cafes, bars, and takeaway options that are budget friendly.

Central Auckland is a great place to hang out as there are many bars, restaurants, breweries, and nightlife. Check out this guide to some of Auckland's best bars and pubs to get some locally made craft beer.

Asian food is very common throughout Auckland and most restaurants are quite good. You will find everything including Japanese, Korean, Vietnam, and Chinese. Other ethnic foods available include Middle Eastern, Italian and Mediterranean. Vegetarian options are also quite common.

While Auckland regularly ranks as one of the most livable cities, it does not have a great public transportation system. If you plan to spend any significant amount of time in Auckland, or travel around the city a lot, it is worth it to rent a car (compare prices here). There are buses, ferries, and a train, but the general level of accessibility and frequency can be quite frustrating. You are sure to have a more enjoyable experience if you have access to your own vehicle.

Buses are the most common form of public transit but you should plan your trip in advance. Traffic can cause delays in the schedule, but if you're staying in the central business district or inner suburbs, then the wait should not be long. Frequency is highest during peak travel times.

If you happen to be staying near a train station, then train travel on weekdays can be convenient. There are five lines to the network and service reliability continues to improve as more investment is made into the system.

By Daniel in Communication
Most Hostels will charge you a fortune for wireless internet in Auckland, either by the hour ($3 per hour are common) or by MegaByte ($10 for 100MB, prices from 2010), so staying in touch with your friends and family or just uploading your emails can be quite expensive. If you don't carry a computer you can use free computers at the libraries or take advantage of the 6.90 Coffee + Cake special at Esquires Coffee places if you have your own laptop, they will give you a 1h Internet voucher with each order.