How much does it cost to travel to Dunedin?

How much money will you need for your trip to Dunedin? You should plan to spend around NZ$137 ($89) per day on your vacation in Dunedin, which is the average daily price based on the expenses of other visitors. Past travelers have spent, on average, NZ$38 ($25) on meals for one day and NZ$37 ($24) on local transportation. Also, the average hotel price in Dunedin for a couple is NZ$139 ($90). So, a trip to Dunedin for two people for one week costs on average NZ$1,922 ($1,247). All of these average travel prices have been collected from other travelers to help you plan your own travel budget.

A vacation to Dunedin for one week usually costs around NZ$961 for one person. So, a trip to Dunedin for two people costs around NZ$1,922 for one week. A trip for two weeks for two people costs NZ$3,844 in Dunedin. If you're traveling as a family of three or four people, the price person often goes down because kid's tickets are cheaper and hotel rooms can be shared. If you travel slower over a longer period of time then your daily budget will also go down. Two people traveling together for one month in Dunedin can often have a lower daily budget per person than one person traveling alone for one week.


How expensive is Dunedin? How much money do I need for Dunedin?

How much does a trip to Dunedin cost? Is Dunedin expensive? The average Dunedin trip cost is broken down by category here. All of these Dunedin prices are calculated from the budgets of real travelers.

Looking for a hotel in Dunedin? Prices vary by location, date, season, and the level of luxury. See below for options.

How much does it cost to go to Dunedin? Naturally, it depends on the dates. We recommend Kayak because they can find the best deals across all airlines.

The price of renting a car in Dunedin will depends on dates, the type of car, the location, and your age. We recommend Kayak because they can find the best deals across all car rental companies.

Reviews of the Best Hostels in Dunedin for Backpackers, Solo Travellers, Couples, and FamiliesQueenstownArrowtownCromwellChristchurchNelson

Dunedin On a Budget 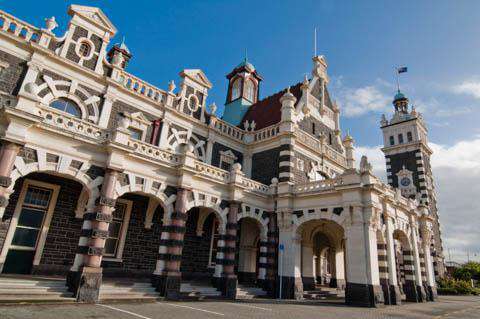 Dunedin Train Station, Dunedin, New Zealand
Dunedin is the second largest city on the South Island of New Zealand. It is situated on the southeast coast and is largely Scottish in its heritage. It is part of the Otago region and has mild temperatures during the spring and summer, but extremely cold temperatures during the end of fall and winter. Dunedin is a university town; The University of Otago is the oldest in New Zealand, established in 1869. The students make up over a tenth of the entire city's population.

There are tons of things to see while visiting Dunedin. For all you chocolate lovers, be sure to check out Cadbury World. This chocolate factory is a must see as it teaches about the history of Cadbury, allows you to see chocolate being made, and of course, try the delicious chocolate at the end of the museum tour. After seeing how the chocolate is made, you could head over to the Speights Brewery and see how the local beer is made as well. At the end of the tour you have an hour to drink all you want (and can) of all the different types of Speights beer they make, from lagers to ales to ciders.

The Octagon, which is the city center, is a unique place to see. It is shaped as, believe it or not, an octagon and has tons of restaurants, bars, and shops. Near the city center is the Old Railway Station, where you can see true Victorian architecture. As mentioned before, Dunedin is a university town, so be sure to stroll through the campus, as there are beautiful buildings throughout, especially the clock tower.

For those interested in Rugby and Football (soccer), you will want to go see the futuristic Forsyth Barr Stadium that was opened in 2011. The stadium is fully enclosed, however, the roof is transparent which allows real grass to grow on the field.

Lastly, walk through the Dunedin Botanical Gardens, which span over 123 acres at the northern end of the city. There is an aviary in the gardens with tons of tropical birds, a large fountain with a marble pool, and tons of exotic plants all over.

There are so many places around and outside of the city that are truly incredible. The Otago Peninsula as a whole is a beautiful place to explore; the whole coastline is very scenic with hidden beaches throughout. If you drive far enough on the western coast of the peninsula (about an hour), you can visit the Royal Albatross Colony, which is the only mainland nesting site in the entire world. Albatross are mainly seen during the summer months; however, if you happen to be visiting during the winter it is likely that you will see other types of wildlife. You can drive or take a bus to the colony.

There are tons of beaches around Dunedin that are less than 25 minutes away by car. Tunnel beach is probably the top beach that you will want to visit. You have to walk through farmland, which brings you atop massive cliffs over the ocean. There is access to get you down to the beach as well. Long Beach is another amazing beach to visit (and even camp at). There is a massive cave at one end of the beach where you can stay overnight, just know that it is usually inhabited by large groups of students during the weekends. Sandfly Bay is full of sand dunes, seals, and sometimes even penguins! Aramoana Beach has beautiful views and is also great for rock climbers. The Moeraki Boulders are a bit further out, but definitely worth visiting. The boulders are perfectly round and make for a great place to get some pictures standing on top of the rocks!

The Catlins are an area about two hours outside of Dunedin. Here you can hike through the lush forest, visit waterfalls, surf, mountain bike, camp, and much more. The Catlins are often overlooked by tourists, therefore, giving it a "hidden gem" feel.

There are a lot of hiking trails around Dunedin. Signal Hill, Mt. Cargill, and Nichols Falls are just a few. These are also great mountain biking trails for all you cyclists. The Taeri Gorge Scenic Railway ride is a great leisurely activity. Simply hop on the train and enjoy the beautiful views of central Otago.

You can find so many different kinds of food ranging from fast food to high class, five-star restaurants. If you are looking for a classic New Zealand fish and chips shop while you are in Dunedin, head over to Mei Wah. It is very reasonably priced and too tasty to be true. They also serve delicious Chinese food there. George Street has tons of options as well, just walk down the street and there will definitely be something that catches your eye. Caper's Cafe is a delicious place for breakfast or lunch; their French toast is to die for.

There is a farmers market on Saturdays at the Railway Station where you can try some Kiwi favorites like bacon butties, Whitebait fritters, and crepes. Etrusco is a great mid-range Italian restaurant no far from the city center.

There is an airport in Dunedin if you are coming from somewhere far. Otherwise, you can drive or take a bus into the city. Buses run regularly from the surrounding cities (Christchurch, Queenstown, Invercargill) through companies like Atomic Shuttles, InterCity, Wanaka-Connexion, and Knightrider. Once in the city, you can take a bus around town, rent a bike, walk, or take a taxi.