A Travel Price Comparison for Families, Couples, and Backpackers Nassau vs. Ponce for Vacations, Tours, and Honeymoons

Should you visit Nassau or Ponce?

If you're trying to decide where to visit between Nassau or Ponce, this travel comparison, which includes costs, can help. The overall cost of travel is usually a consideration when deciding where to go next, and the cost comparison down below can help you decide based on the average prices from other travelers along with your own travel budget.

There are few vacation destinations more famous than the Bahamian city of Nassau. This capital city is full of laid back locals, relaxed tourists and the iconic pastel pink government houses.

As the largest city in the Bahamas, Nassau can hold plenty of people. Not only are there hundreds of tourists on any given day, the city is also home to 260,000 people – that is 80 percent of the Bahamas' total population.

Founded around 1650, Nassau's location made it a great spot on the trade route. So great, in fact, that it also became a popular destination for pirates – including the infamous Blackbeard.

Pack light because it's going to be pretty steamy in Nassau. The climate is essentially identical to southern Florida. It is warm and humid all year with the occasional cold snap in the winter.

Which city is cheaper, Ponce or Nassau?

The average daily cost (per person) in Nassau is $150, while the average daily cost in Ponce is $164. These costs include accommodation (assuming double occupancy, so the traveler is sharing the room), food, transportation, and entertainment. While every person is different, these costs are an average of past travelers in each city. What follows is a categorical breakdown of travel costs for Nassau and Ponce in more detail.

Some typical examples of transportation costs in Nassau are as follows:

Hired Cars and Shuttles in Nassau

Some specific examples of transportation prices in Nassau:

Is it cheaper to fly into Nassau or Ponce?

Prices for flights to both Ponce and Nassau change regularly based on dates and travel demand. We suggest you find the best prices for your next trip on Kayak, because you can compare the cost of flights across multiple airlines for your prefered dates.

Also, here are some specific examples of food and dining related activities in Nassau.

Some typical examples of activities, tours, and entrance ticket prices in Nassau are as follows:

Tours and Activities in Nassau

Some specific costs of activities, tours, and entrance tickets for Nassau are as follows:

Some typical examples of the costs for nightlife and alcohol in Nassau are as follows:

Sample the Local Flavors in Nassau

Some specific costs for nightlife related activities in Nassau:

When comparing the travel costs between Nassau and Ponce, we can see that Ponce is more expensive. However, the two cities are actually relatively comparable in price, as the difference is somewhat minimal. Generally, this means that you could travel with generally the same travel style and level of luxury in each place. Since both cities are in Caribbean Islands, it's no surprise that their costs are relatively close, as many destinations here have somewhat similar travel prices overall.

Cheap Alternative Cruise Shore Excursions in Nassau (On Your Own)Freeport 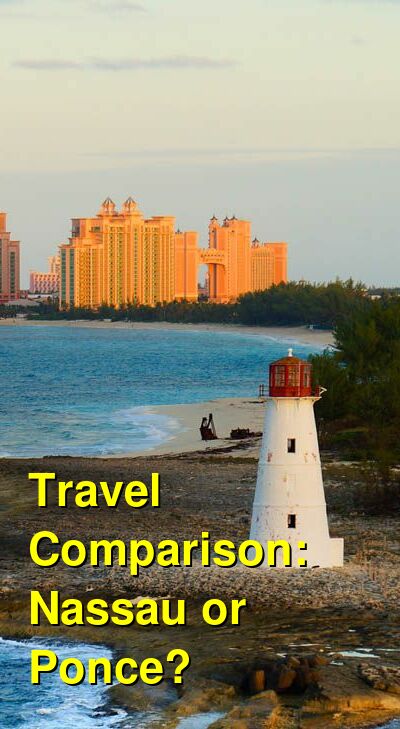