A Travel Price Comparison for Greece Thiva (Thebes) vs. Heraklion for Vacations, Tours, and Honeymoons

Should you visit Thiva (Thebes) or Heraklion?

Trying to figure out where to travel next? This travel cost comparison between Thiva (Thebes) and Heraklion can help. For many travelers, the cost of a destination is a primary consideration when choosing where to go.

The largest city on the island of Crete, Heraklion on first glance is almost completely modern — a frenzy of traffic, concrete, and dust. Do not expect pristine beaches and glittering waves (those can be found on other parts of Crete). Heraklion is first and foremost a city. Once you get past its grittiness, you will find that there are some attractive features beneath first impressions. The antiquity of the place lies embedded in the modern and is presented in one of the best museums in Greece, the food is excellent, and the people are friendly and welcoming. And though the sea is not great for swimming, its presence along the Venetian port will take you to another time if you need a break from Heraklion's bustling center.

Which city is cheaper, Heraklion or Thiva (Thebes)?

The average daily cost (per person) in Thiva (Thebes) is €102, while the average daily cost in Heraklion is €126. These costs include accommodation (assuming double occupancy, so the traveler is sharing the room), food, transportation, and entertainment. While every person is different, these costs are an average of past travelers in each city. Below is a breakdown of travel costs for Thiva (Thebes) and Heraklion in more detail.

Travelers usually pay around €130 for a double occupancy room in Heraklion If you want to be in a premiere location or have high end amenities, you can expect to pay a bit more.

The average traveler spends about €41 per day in Heraklion for food, but obviously this is dependent on the type of restaurant and the amount of food ordered. To save money you can grab a lighter lunch or dinner, or you can try fast food or street food.

For Heraklion, here are some samples of tours and activities related to meals and dining experiences:


Hired Cars and Shuttles in Heraklion

Also for Heraklion, here are a few examples of actual transportation services:

Is it cheaper to fly into Thiva (Thebes) or Heraklion?

Prices for flights to both Heraklion and Thiva (Thebes) change regularly based on dates and travel demand. We suggest you find the best prices for your next trip on Kayak, because you can compare the cost of flights across multiple airlines for your prefered dates.

Sightseeing expenses in Heraklion, including the cost of admission tickets for day tours, museums, and attractions, usually cost an average of €30 per day, per person.


Tours and Activities in Heraklion

For Heraklion, here are a few prices for actual activities, tours, and tickets provided by various companies:


Sample the Local Flavors in Heraklion

Also in Heraklion, these are the prices for nightlife and alcohol related activities from various tour providers: 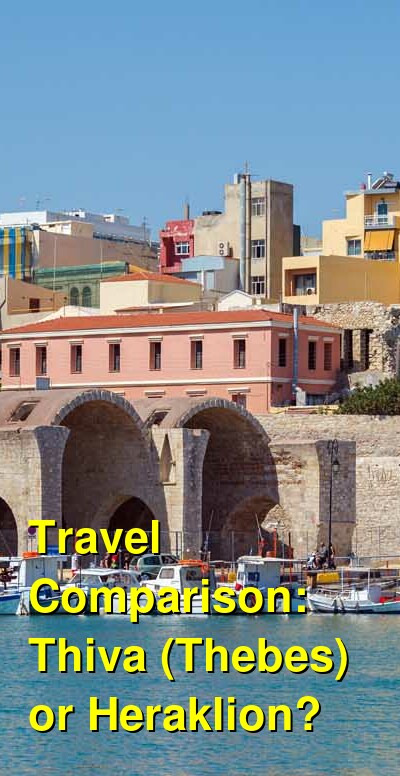