How much does it cost to travel to Corinth?

How much money will you need for your trip to Corinth? You should plan to spend around €96 ($110) per day on your vacation in Corinth, which is the average daily price based on the expenses of other visitors. Past travelers have spent, on average, €32 ($36) on meals for one day and €5.71 ($6.52) on local transportation. Also, the average hotel price in Corinth for a couple is €115 ($132). So, a trip to Corinth for two people for one week costs on average €1,350 ($1,542). All of these average travel prices have been collected from other travelers to help you plan your own travel budget.

A vacation to Corinth for one week usually costs around €675 for one person. So, a trip to Corinth for two people costs around €1,350 for one week. A trip for two weeks for two people costs €2,701 in Corinth. If you're traveling as a family of three or four people, the price person often goes down because kid's tickets are cheaper and hotel rooms can be shared. If you travel slower over a longer period of time then your daily budget will also go down. Two people traveling together for one month in Corinth can often have a lower daily budget per person than one person traveling alone for one week.


How expensive is Corinth? How much money do I need for Corinth?

How much does a trip to Corinth cost? Is Corinth expensive? The average Corinth trip cost is broken down by category here. All of these Corinth prices are calculated from the budgets of real travelers.

How much do vacation rentals cost in Corinth? Prices vary by location, date, size of the place, and the level of luxury. See below for options.

How much does it cost to go to Corinth? Naturally, it depends on the dates. We recommend Kayak because they can find the best deals across all airlines.

The price of renting a car in Corinth will depends on dates, the type of car, the location, and your age. We recommend Kayak because they can find the best deals across all car rental companies.

Corinth On a Budget 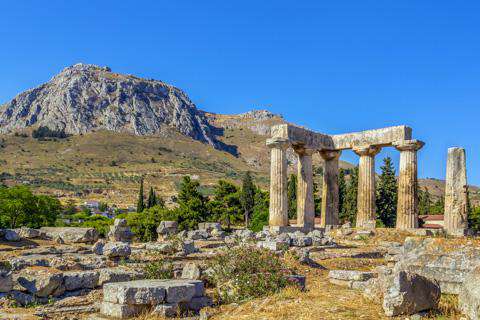 Corinth, Greece
One of the oldest towns in Peloponnese, Corinth is a port city with a population of about 58,000. The area is thought to have been inhabited since at least 6000BC. In the main part of the city, "new" Corinth, there is little left to remind you of the city's rich history. Much of this area has been destroyed by earthquake. Most of the interesting archeological sights are found in "old" Corinth, a short distance away.

The climate in Corinth is similar to that of other area's around Greece. It's a warm, Mediterranean climate with hot and dry summers and mild winters. There are seasonal winds during the summer months that are refreshing, and temperatures may drop somewhat during the evenings to give residents a break from the heat.

Most of the city's sites are in the old town area. There are many ruins, temples and historical buildings. Some of the more interesting sights in the old town area include the Temple of Apollo, the Acrocorinth, Ancient Theater, and Roman Odeum. There's a museum that is worth visiting as well.

There are some interesting activities in Corinth that take advantage of the city's historical sights. One popular thing to do is to take a boat ride through the Corinth Canal. The canal connects the Aegean Sea and the Ionian Sea, cutting through the narrow Isthmus of Corinth. It's a dramatic trip and the walls are impressive. Once you're inside the canal, the walls feel like they are only a few feet away.

Another popular activity is to head up Acrokorinthos, which is a mountain that looks out over the ancient town. There's a castle there that is interesting and the surrounding views are breathtaking. You can walk into the castle and there are outer walls with large gates. Inside the castle you'll find chapels, an abandoned mosque and some nice foot paths. The most significant sight is the Temple of Aphrodite.

There are some good restaurants in Corinth that are reasonably priced. Seafood is available and is usually fresh and good. Greek specialties are recommended as well. Some restaurants offer good views, but they are often a little more expensive. During the off season, the quality of the food at some restaurants may vary as well.

The city is conveniently located very close to Athens, making it easy to travel between the two cities by either bus, train or car in an efficient manner. Most transportation arrives in the "new" Corinth area, but your final destination is likely to be the ancient part of the city. This area is about five kilometers away. You will want to catch a bus from there to the "old" Corinth area where you will find most of the archeological sights of interest. Ask the locals where to catch the bus as most people will be helpful and informative. The bus stop is just beside a cafe in the middle of town.

When you're ready to head back to Athens, you can find the best bus station near the ocean. Ask around and residents can point the way for you, as it is somewhat hard to find. If you're still in "old" Corinth, first catch the bus back to the newer part of town. If you let the bus driver know you are going back to Athens, he may drop you off directly at the bus station and save you the hassle of finding it yourself. Buses back to Athens are frequent and fast so you shouldn't have a problem catching one.

By backpackguru in Intercity Transportation
A great experience to have is to ride through the Corinth Canal on some sort of boat, be it a cruise ship, barge, etc. It's a fascinating thing to do. As you get close you can see the cuts made on the side walls. Once you're in the canal, it appears so compact that you think you could touch the walls.

The history of the canal is interesting. The Corinth Canal connects the Aegean Sea and the Ionian Sea. It goes through the Isthmus of Corinth and divides the Peloponnesian peninsula and the Greek mainland. The passage is less than four miles in length and saves ships several hundreds of miles in distance that must be covered. It is still too narrow for many modern ships, but it has conveniently shortened the trip for many.