How much does it cost to travel to Crete?

How much money will you need for your trip to Crete? You should plan to spend around €81 ($88) per day on your vacation in Crete, which is the average daily price based on the expenses of other visitors. Past travelers have spent, on average, €28 ($30) on meals for one day and €19 ($20) on local transportation. Also, the average hotel price in Crete for a couple is €76 ($83). So, a trip to Crete for two people for one week costs on average €1,135 ($1,234). All of these average travel prices have been collected from other travelers to help you plan your own travel budget.

A vacation to Crete for one week usually costs around €567 for one person. So, a trip to Crete for two people costs around €1,135 for one week. A trip for two weeks for two people costs €2,269 in Crete. If you're traveling as a family of three or four people, the price person often goes down because kid's tickets are cheaper and hotel rooms can be shared. If you travel slower over a longer period of time then your daily budget will also go down. Two people traveling together for one month in Crete can often have a lower daily budget per person than one person traveling alone for one week.


How expensive is Crete? How much money do I need for Crete?

How much does a trip to Crete cost? Is Crete expensive? The average Crete trip cost is broken down by category here. All of these Crete prices are calculated from the budgets of real travelers.

Looking for a hotel in Crete? Prices vary by location, date, season, and the level of luxury. See below for options.

How much does it cost to go to Crete? Naturally, it depends on the dates. We recommend Kayak because they can find the best deals across all airlines.

The price of renting a car in Crete will depends on dates, the type of car, the location, and your age. We recommend Kayak because they can find the best deals across all car rental companies.

Tips and Handouts Budget in Crete

Crete On a Budget 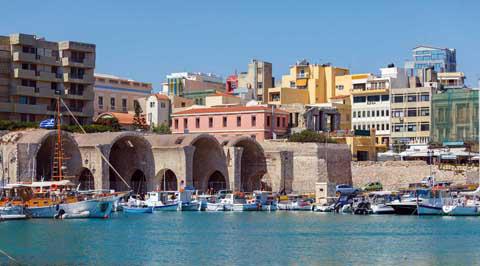 Heraklion, Crete, Greece
The largest and most populous island of Greece, Crete has become a frequent vacation destination for many visitors. The terrain of the place is quite varied - very mountainous stretching east to west, with lush valleys, fertile plateaus, gorges, and famous caves like Idaion, the birthplace of the Greek god Zeus. The surrounding smaller islands and beaches are key attractions as well.

Beyond the natural wonders, Crete is also famously home to the ancient Minoan civilization, one of the oldest recorded civilizations in Europe. There are a few archaeological sites on the island, like the Palace of Knossos, and numerous museums worth the while for those looking to dive into the history of the place.

Whether you plan on basking in the natural wonders of Crete, prefer to explore the culture of its cities and history, or wish to do a little bit of everything, this island has enough to occupy an extended visit.

The two biggest cities of the island-Heraklion and Chania-hold a faÃ§ade of modernity with the air of antiquity hiding beneath it all. While Heraklion is more of a metropolis teeming with traffic, cement, and dust, it does hold a few gems of Venetian architecture like the Koules Fortress on the old port, as well as one of the best archaeological museums of Greece. This museum alone, paired with a visit to the archaeological site of the Knossos Palace (on the city's outskirts), will give you a rich knowledge of Minoan culture. The port of Chania is a bit more charming in appearance with beautiful Venetian architecture wherever you turn. Here you can explore the old Venetian Harbor and lighthouse, visit the maritime museum of Crete, of get lost on one of the nearby beaches.

Other popular attractions on Crete include the Venetian castle at Rethymno, the gorge of Samaria, the islands of Chrysi, Elafonisi, Gramvousa, and Spinalonga and the Palm Beach of Vai, which is the largest natural palm forest in Europe.

As mentioned above, Heraklion and Chania, are Crete's two largest cities. In addition to the Venetian architecture, museums, and archaeological sites, the two also have much to offer in places to stay, shopping, and dining. One could spend days getting lost in the bustling nature of Crete's modern culture on the sea.

The next largest populated areas on the island are Rethymno, Ierapetra, Agios Nikolaos, and Sitia. As far as demographics go, nearly half of the populous lives in Crete's main cities and towns, while the other half resides in the rural parts.

Outside of the city sights, Crete has a few attractions that appeal to the naturalists out there. Just east of Heraklion on the north side of Crete sits the town of Chersonisos, which houses the Aquaworld Aquarium & Reptile Rescue Centre. A Travelers' Choice 2015 winner on TripAdvisor, this marine rescue center is home to some of the local sea life and reptiles from all over. The center offers a unique aquarium experience in that hands-on interaction with many of the animals is encouraged.

As far as beaches go, one of the most beautiful on Crete is Elafonissi Beach located on the west end of the island. It is actually an island just off of Crete's southwestern corner, and much of its pristine condition is due to its status as a protected nature reserve. The surrounding area is a turquoise lagoon with white sandy beaches, and shallow waters so calm that you can walk across the sea from Crete to Elafonissi. Another breathtaking place by the sea is Balos Beach and Lagoon, on the northwest corner of Crete. Similar to Elafonissi, the waters are shallow and turquoise and the beaches are white and sandy. There is also an area just past the lagoon good for snorkeling, and it is closer to civilization for those wanting to be close to amenities.

Any of Crete's major cities will have more than enough tavernas and restaurants for visitors to choose from. Being the largest city, Heraklion offers just about any kind of food from Starbucks to traditional Greek cuisine, so if you seek variety, one of Crete's cities is your best bet. All over the island you will come across eateries including classic Greek tavernas, traditional cuisine, and some of the best fresh fish taken right out of the sea.

Local markets will allow you to sample all kinds of Cretan cheeses, from goat's to sheep's, mild and soft to earthy and hard, and even some fried varieties that will melt in your mouth. Most markets also offer all sorts of fresh vegetables and baked goods. And be sure not forget the olive oil. With over 15 million olive trees, the island of Crete uses olive oil in just about everything.

Crete has three significant airports. Nikos Kazantzakis at Heraklion and the Daskalogiannis airport at Chania serve international routes and act as the main gateways to the island for travelers. There is also a smaller one located in Sitia.

The island is also well served by ferries. Minoan, Anek and Blue Star all operate daily between Athens and Heraklion. From Heraklion, Anek also has a weekly service to Karpathos, Kasos, Milos, Rhodes, and Santorini - and Hellenic Seaways goes to Mykonos, Paros, and Santorini daily.

Once you are on the island, you can choose to navigate by rental car, taxi, or bus. There are three bus stations in Heraklion, one local and the other two catering to most of the other main attractions on the island.