How much does it cost to travel to Flores?

How much money will you need for your trip to Flores? You should plan to spend around Q204 ($26) per day on your vacation in Flores, which is the average daily price based on the expenses of other visitors. Past travelers have spent, on average, Q80 ($10) on meals for one day and Q49 ($6.35) on local transportation. Also, the average hotel price in Flores for a couple is Q107 ($14). So, a trip to Flores for two people for one week costs on average Q2,850 ($370). All of these average travel prices have been collected from other travelers to help you plan your own travel budget.

A vacation to Flores for one week usually costs around Q1,425 for one person. So, a trip to Flores for two people costs around Q2,850 for one week. A trip for two weeks for two people costs Q5,700 in Flores. If you're traveling as a family of three or four people, the price person often goes down because kid's tickets are cheaper and hotel rooms can be shared. If you travel slower over a longer period of time then your daily budget will also go down. Two people traveling together for one month in Flores can often have a lower daily budget per person than one person traveling alone for one week.


How expensive is Flores?

How much does a trip to Flores cost? Is Flores expensive? The average Flores trip cost is broken down by category here. All of these Flores prices are calculated from the budgets of real travelers.

While meal prices in Flores can vary, the average cost of food in Flores is Q80 per day. Based on the spending habits of previous travelers, when dining out an average meal in Flores should cost around Q32 per person. Breakfast prices are usually a little cheaper than lunch or dinner. The price of food in sit-down restaurants in Flores is often higher than fast food prices or street food prices.

The cost of a taxi ride in Flores is significantly more than public transportation. On average, past travelers have spent Q49 per person, per day, on local transportation in Flores.

How much does it cost to go to Flores? Naturally, it depends on the dates. We recommend SkyScanner because they can find the best deals across all of the airlines.


How much money do I need for Flores?

How much do tours to Flores cost? Multi-day tours can often be an effecient way to see the highlights of a country or region.

Find a hostel, guesthouse, or B&B in Flores

The Best Hostels in Flores, Guatemala for Solo Travellers and CouplesGuatemala CityAntigua Guatemala

Flores On a Budget

Guatemala
The town of Flores is located in Peten, Guatemala. The main hub is located on an island on Lago Peten Itza, which is connected to the mainland by a causeway. On the other side of the causeway are the towns of Santa Elena and San Benito, however, all three are often referred to as Flores. Most people visit the area for its proximity to the ancient Mayan ruins of Tikal, though the town itself is also charming with colonial buildings and historic churches lining the cobbled streets.

When you come to Flores, you come to see the ancient Mayan ruins of Tikal in the Guatemalan rainforest. In its prime, circa 200 to 900 AD, Tikal was the capital of a conquest state that became one of the most powerful kingdoms of the ancient Maya. The monuments at the ruins of Tikal date back even further to the 4th Century BC. Now designated as a National Park and UNESCO World Heritage Site, the core of the complex includes two major temple pyramids as well as the ruins of royal palaces, residences, smaller pyramids, and stone monuments. The site is a paradise for history buffs and archaeology enthusiasts, and very impressive for the regular tourist as well.

For those interested in geology, there is the Ak'tun Kan, or Cave of the Serpent, which has many formations, stalagmites and stalactites, resembling objects like animals and people. The relics are labeled in Spanish, though a tour guide can assist with translations.

As far as wildlife goes, ARCAS is a wildlife rescue center dedicated to the prevention of animal trafficking. It has its own boat service from Flores allowing visitors and volunteers if you wish to offer your services. Also nearby is the Petencito Zoo which houses some of the animals rescued by ARCAS as well as a small range of other animals like monkeys and jaguars.

As mentioned earlier, Flores is made up of three "towns": Flores Island, Santa Elena, and San Benito. Flores Island is the most attractive of the three with charming cobbled streets lined with colonial red-roofed houses as well as historic churches like the Catedral Nuestra Señora de Los Remedios. Walking along these streets you will find a central park near the church, a number of places to spend the night, and discover many places to enjoy a meal beside the water or surrounded by the charm of the colonial architecture. Across the causeway, Santa Elena and San Bernito off a more authentic experience of a Guatemalan town. While Flores Island is quiet and peaceful, the two on the mainland are busy with traffic, litter, and street food.

When visiting Flores, there is a wide range of activities for visitors to engage in from volunteering to enjoying the pleasures of the lake or exploring ancient ruins. Volunteer opportunities include helping at an ecological park like with the wildlife of ARCAS as mentioned before, as well as community projects like building schools or assisting with education. Lake activities include hiring a boat to spend the day enjoying the scenery of Lake Peten Itza or renting a canoe to explore at your own leisure. Swimming is also common with public piers located on the north side of the city.

Venturing to the ruins of Tikal are of course a must, while a day trip to Ixpanpajul Natural Park will offer opportunities with a zip-line, sky walk, and horseback riding through the rainforest.

In the region of Peten, wild animals are common to see on the menu, though consuming them is detrimental to the local ecology as many of them are hunted illegally. In Flores, most restaurants serve your typical Guatemalan fare, though there are a few international options. Guatemalan cuisine prominently features corn, chilies, and beans as key ingredients as well as dishes with rice, pork, beef, chicken, cheese, and tortillas. Tamales are a common local favorite. They come in a variety of ways, but are basically a dish made of masa (or maize), which is steamed in a corn husk or banana leaf and usually filled with meat, fruits, and/or nuts. Other main dishes include a seafood soup with plantain slices called tapado, a variety of stews made with meat, vegetables, and spices, as well as a kind of stuffed pepper dish called chiles rellenos. Desserts typically consist of banana bread, a Spanish rice pudding called arrroz con leche, and chick peas in syrup, amongst many others.

By plane, Mundo Maya International Airport is located just outside of Flores and is the only other international airport in Guatemala besides the one in Guatemala City. TAG and Avianca both run daily flights from Guatemala City, Tropic Air runs daily flights from Belize, and Avianca is also used to fly from Cancun. It is only about 2 kilometers from the Flores airport to the causeway. Taxis are available from the airport to Flores, as are shuttles to the ruins of Tikal.

By bus, there are options available from Guatemala City (8 to 10 hours), Coban (5 to 7 hours), and Belize (5 to 6 hours), amongst others which stop at the Fuente del Norte bus station in Santa Elena just across the causeway from Flores Island. 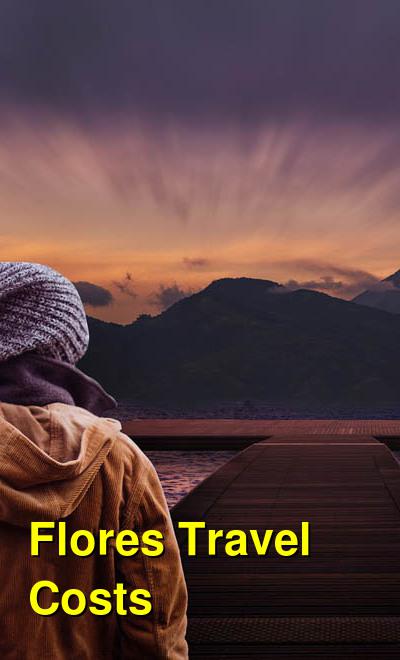 By backpackguru in Entertainment
Like most towns around Guatemala, Flores has a small central plaza. It's situated on a hill, so it's an upward climb to get there. It's also possible to get a ride in a tuk tuk if you're not up for the walk. Flores' plaza has various sports courts, some eating options, a small church, and a gazebo. It's a great place to wander around and fully immerse yourself in the town and all that it has to offer.

By backpackguru in Local Transportation
The best way to explore Flores is on foot. You can walk around the whole island in only about 15 minutes and you can walk to either Santa Elena or San Benito as well. If you're not up for the hike you can catch a ride on an auto rickshaw. There are also vans and buses that make the trip. A rickshaw will cost you around Q5, but if you're carrying a lot with you they'll likely up the fare or double it.