How much does it cost to travel to Haifa?

How much money will you need for your trip to Haifa? You should plan to spend around ₪370 ($105) per day on your vacation in Haifa, which is the average daily price based on the expenses of other visitors. Past travelers have spent, on average, ₪134 ($38) on meals for one day and ₪15 ($4.24) on local transportation. Also, the average hotel price in Haifa for a couple is ₪446 ($127). So, a trip to Haifa for two people for one week costs on average ₪5,174 ($1,475). All of these average travel prices have been collected from other travelers to help you plan your own travel budget.

A vacation to Haifa for one week usually costs around ₪2,587 for one person. So, a trip to Haifa for two people costs around ₪5,174 for one week. A trip for two weeks for two people costs ₪10,348 in Haifa. If you're traveling as a family of three or four people, the price person often goes down because kid's tickets are cheaper and hotel rooms can be shared. If you travel slower over a longer period of time then your daily budget will also go down. Two people traveling together for one month in Haifa can often have a lower daily budget per person than one person traveling alone for one week.


How expensive is Haifa? How much money do I need for Haifa?

How much does a trip to Haifa cost? Is Haifa expensive? The average Haifa trip cost is broken down by category here. All of these Haifa prices are calculated from the budgets of real travelers.

Looking for a hotel in Haifa? Prices vary by location, date, season, and the level of luxury. See below for options.

How much does it cost to go to Haifa? Naturally, it depends on the dates. We recommend Kayak because they can find the best deals across all airlines.

The price of renting a car in Haifa will depends on dates, the type of car, the location, and your age. We recommend Kayak because they can find the best deals across all car rental companies.

What did other people spend on Food in Haifa?

Typical prices for Food in Haifa are listed below. These actual costs are from real travelers and can give you an idea of the prices in Haifa, but your costs will vary based on your travel style.

Haifa On a Budget 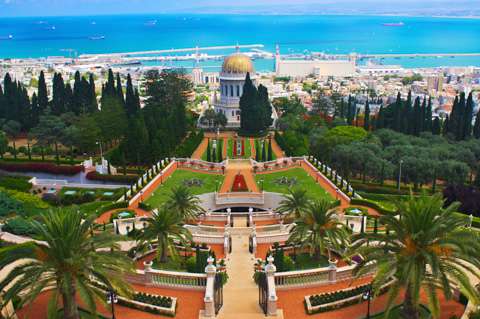 Haifa, Israel
Located on the northern Mediterranean coast of Israel, Haifa is Israel's third largest city. It is also a beautiful and strategically located city near the border with Lebanon. The population of Haifa, which is approximately 300,000, is surprisingly diverse. There are Jews, Muslim, and Christian Arabs throughout the city. While Haifa is an industrial city with a strong work ethic and a good job base, it is also a beautiful city with many gardens and a stunning coastline. Today the job base has increasingly become technology based with some large companies such as Google and Microsoft offering employment in the area. Haifa University is also the country's top technology university.

One of the most significant sights in Haifa is the Bahai Gardens and World Center. This is a beautiful landmark of the city that is open every day with the exception of Wednesdays. Also make sure you visit the Cave of Elijah, Stella Maris, and the National Museum of Science. There is also a German Colony that is centered around Ben-Gurion Boulevard. The main street is a promenade with many restaurants and cafes. The University of Haifa is also worth exploring.

In general, a day or two is sufficient to visit most of the sights in Haifa. While it is a beautiful city, and well worth a visit, there are not a large number of sights and attractions. The city is best visited as a whole, and not on a sight by sight basis.

Haifa's oldest neighborhood is Wadi Salib. This is the Old City near the port. Wadi Nisnas is the center for Arab life in the city. Hadar was the city's cultural center, but today it has two commercial centers that are each surrounded by the city's older neighborhoods. One commercial center is near the port area and the other is halfway up the mountain. Neve Sha'anon is a neighborhood that dates back to the 1920s. Other neighborhoods around town include Bat Galim, Shikmona Beach, Kiryat Eliezer, Abbas, Khalisa, Ein HaYam, Haar HaAliya, Kiryat Sprinzak and Neve David, among others.

One of the most popular activities to do in Haifa is to go to the beach. The best beaches can be found near the Hof Hacarmel bus and train station. You can walk straight to the beach from either of the stations. There are beautiful beaches found along the southwest side of the city. There is also a boardwalk that is lined with cafes and restaurants. This area is a center for activity and is a great place to socialize or people watch.

There are some great restaurants throughout Haifa, but the cheapest food in town is the street food. Like elsewhere in Israel, falafel is readily available throughout the city. There are also plenty of shawarma stands that are great for grabbing a quick lunch. You'll also find plenty of international restaurants including Romanian and Italian options. Restaurants in Haifa, like elsewhere in Israel, are quite expensive, but the food is generally a high quality. You are expected to tip in most restaurants, and approximately 10% is considered customary. If you receive poor service, it is acceptable to tip less.

The best way to travel around Haifa is by the elaborate bus system. Buses are convenient and run every day of the week. Haifa is also a very walkable city, so with the exception of longer trips, most destinations can be reached on foot.

There are two main bus stations in town. The first is Mercazit HaMifratz, where you can catch buses to the northern suburbs and the Sea of Galilee. This station is located near the Lev HaMifraz train station. The second station, Mercazit Hof HaCarmel, offers buses to more southern destinations including Tel Aviv and Jerusalem. It is located near the Hof Ha Carmel train station.

By backpackguru in Accommodation
During busy times accommodation can be scarce and hard to come by in Haifa. Head to a few of the guesthouses, but if they're all full, ask at the desk if they know of any residents that rent out rooms to travelers. It's a fun way to experience local life in Haifa. We ended up staying at a retired couples home. They invited us onto their porch for drinks and we spent much of the evening swapping stories and learning what it's like to live in such a tension filled region. They do offer a very unique perspective on things. Most of the homes aren't air conditioned, but are built in a way that lets the outside breeze flow through. You spend a lot of time on the porch and it's actually quite relaxing.