How much does it cost to travel to Tel Aviv?

How much money will you need for your trip to Tel Aviv? You should plan to spend around ₪417 ($127) per day on your vacation in Tel Aviv, which is the average daily price based on the expenses of other visitors. Past travelers have spent, on average, ₪83 ($25) on meals for one day and ₪26 ($7.98) on local transportation. Also, the average hotel price in Tel Aviv for a couple is ₪516 ($158). So, a trip to Tel Aviv for two people for one week costs on average ₪5,833 ($1,782). All of these average travel prices have been collected from other travelers to help you plan your own travel budget.

A vacation to Tel Aviv for one week usually costs around ₪2,916 for one person. So, a trip to Tel Aviv for two people costs around ₪5,833 for one week. A trip for two weeks for two people costs ₪11,665 in Tel Aviv. If you're traveling as a family of three or four people, the price person often goes down because kid's tickets are cheaper and hotel rooms can be shared. If you travel slower over a longer period of time then your daily budget will also go down. Two people traveling together for one month in Tel Aviv can often have a lower daily budget per person than one person traveling alone for one week.


How expensive is Tel Aviv? How much money do I need for Tel Aviv?

How much does a trip to Tel Aviv cost? Is Tel Aviv expensive? The average Tel Aviv trip cost is broken down by category here. All of these Tel Aviv prices are calculated from the budgets of real travelers.

Find a hostel, guesthouse, or B&B in Tel Aviv

What did other people spend on Hotels in Tel Aviv?

Typical prices for Accommodation in Tel Aviv are listed below. These actual costs are from real travelers and can give you an idea of the prices in Tel Aviv, but your costs will vary based on your travel style.

What did other people spend on Food in Tel Aviv?

Typical prices for Food in Tel Aviv are listed below. These actual costs are from real travelers and can give you an idea of the prices in Tel Aviv, but your costs will vary based on your travel style.

How much does it cost to go to Tel Aviv? Naturally, it depends on the dates. We recommend SkyScanner because they can find the best deals across all airlines.

The price of renting a car in Tel Aviv will depends on dates, the type of car, the location, and your age. We recommend SkyScanner because they can find the best deals across all car rental companies.


What did other people spend on Transportation in Tel Aviv?

Typical prices for Transportation in Tel Aviv are listed below. These actual costs are from real travelers and can give you an idea of the prices in Tel Aviv, but your costs will vary based on your travel style.

What did other people spend on Entertainment in Tel Aviv?

Typical prices for Entertainment in Tel Aviv are listed below. These actual costs are from real travelers and can give you an idea of the prices in Tel Aviv, but your costs will vary based on your travel style.

What did other people spend on Water in Tel Aviv?

Typical prices for Water in Tel Aviv are listed below. These actual costs are from real travelers and can give you an idea of the prices in Tel Aviv, but your costs will vary based on your travel style.

Tel Aviv On a Budget 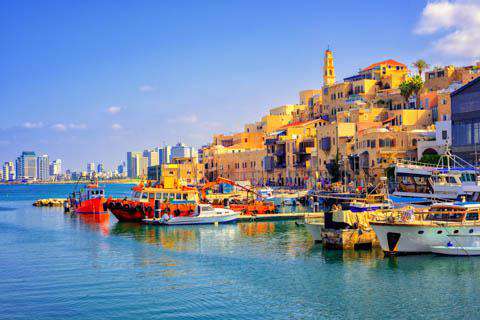 Jaffa, Tel Aviv, Israel
Tel Aviv is the second largest city in Israel and is situated on the Mediterranean coast 60 kilometers north of Jerusalem. It's a rapidly growing city and is one of the most modern and cosmopolitan cities in Israel. The official name is Tel Aviv-Yafo because the city has grown to include the ancient port city of Yafo. If you're looking for an embassy, you are likely to find it in Tel Aviv, despite Jerusalem being the official capital of Israel.

Areas throughout Tel Aviv that are worth checking out include Old Jaffa, which is one of the oldest ports in the world. You'll also find a popular flea market nearby. Rabin Square is the largest public square in Israel and Dizengoff Centre is the most famous shopping area in Tel Aviv. Also be sure and take a stroll down the shore promenade where you can people watch and enjoy the warm Mediterranean coastline. Joshua Gardens is Tel Aviv's main central park and is also worth a visit.

There are also a handful of museums in Tel Aviv that are worth a visit. These include Tel Aviv Museum of Art and the Museum of the Jewish Diaspora.

The city center is at the heart of the city. This is where most of the tourist attractions are. This area is defined by Allenby Street to the south and Yarkon River to the north.

The northern part of the city is the wealthiest area. There are many parks, Tel Aviv University, and Eretz Israel Museum in this area.

The southern areas are younger and home to many foreign workers and illegal immigrants. Some of the neighborhoods have become quite trendy.

Jaffa (Yafo) is one of the world's oldest ports and has a lot of religious and historical significance.

There is no shortage of activities that you can enjoy while you're in Tel Aviv. Many people visit the beach, which is best enjoyed during the summer months. It's a festive atmosphere, particularly on Friday afternoons when music, barbecues, and party crowds are easy to find.

Football (soccer) is the most popular sport in Israel and there are three major football clubs in Tel Aviv. These are Maccabi Tel Aviv, Hapoel Tel Aviv, and Bnei Yuhuda.

The restaurant scene is Tel Aviv is excellent. You can really find any food option you might desire. There are many international options throughout the city including Chinese, sushi, French, or Italian. Food can be quite expensive in Israel (because much of it is imported), and if you're on a budget you'll find falafel or hummus options at many of the street stands around town. For more information, check out this amazing Tel Aviv food guide which contains information about the best restaurants and dining options in the city.

Because Tel Aviv is a travel hub for many visitors, it is quite common to rent a car here to travel around all of Israel. The roads are great for driving here, and the country isn't too large so having a car is a good option. But first, check out 10 things you need to know before renting a car in Israel for some great tips and advice.

The best way to travel between neighborhoods in Tel Aviv is by bus. The bus system, like elsewhere in Israel, is quite efficient and easy to understand. Another option is by taxi. Taxis are readily available almost anywhere. You can expect to pay anywhere from 20 to 30 NIS for a local ride in Tel Aviv, and do confirm that your driver is using their meter.

Bicycling is also gaining popularity in the city. The flat terrain and comfortable weather make it a good place to explore by bike. There are an increasing number of bike paths around as well. You can rent bikes at several of the bike shops around town.

By backpackguru in Souvenirs
Tel Aviv is a modern city, with an excellent party vibe and beautiful beaches. It has a completely different feel than it's nearby neighbor, Jerusalem. There are many international restaurants to choose from and tons of clubs to visit. One of the most interesting parts of Tel Aviv is the markets though. You can find fresh Mediterranean produce, homemade arts and crafts, among other things around these great street stalls. You can pass several hours checking out what people are selling. Some of the more interesting booths have photography from around Israel. The photography has managed to capture scenes at the Western Wall and various events than an outsider would never be able to capture.