How much does it cost to travel to Tiberias?

How much money will you need for your trip to Tiberias? You should plan to spend around ₪264 ($81) per day on your vacation in Tiberias, which is the average daily price based on the expenses of other visitors. Past travelers have spent, on average, ₪84 ($26) on meals for one day and ₪14 ($4.22) on local transportation. Also, the average hotel price in Tiberias for a couple is ₪331 ($102). So, a trip to Tiberias for two people for one week costs on average ₪3,691 ($1,135). All of these average travel prices have been collected from other travelers to help you plan your own travel budget.

A vacation to Tiberias for one week usually costs around ₪1,845 for one person. So, a trip to Tiberias for two people costs around ₪3,691 for one week. A trip for two weeks for two people costs ₪7,381 in Tiberias. If you're traveling as a family of three or four people, the price person often goes down because kid's tickets are cheaper and hotel rooms can be shared. If you travel slower over a longer period of time then your daily budget will also go down. Two people traveling together for one month in Tiberias can often have a lower daily budget per person than one person traveling alone for one week.


How expensive is Tiberias? How much money do I need for Tiberias?

How much does a trip to Tiberias cost? Is Tiberias expensive? The average Tiberias trip cost is broken down by category here. All of these Tiberias prices are calculated from the budgets of real travelers.

Find a hostel, guesthouse, or B&B in Tiberias

What did other people spend on Food in Tiberias?

Typical prices for Food in Tiberias are listed below. These actual costs are from real travelers and can give you an idea of the prices in Tiberias, but your costs will vary based on your travel style.

How much does it cost to go to Tiberias? Naturally, it depends on the dates. We recommend SkyScanner because they can find the best deals across all airlines.

The price of renting a car in Tiberias will depends on dates, the type of car, the location, and your age. We recommend SkyScanner because they can find the best deals across all car rental companies.

What did other people spend on Entertainment in Tiberias?

Typical prices for Entertainment in Tiberias are listed below. These actual costs are from real travelers and can give you an idea of the prices in Tiberias, but your costs will vary based on your travel style.

Tiberias On a Budget

Tiberias, Israel
Tiberias is a major tourist destination in Israel. It's positioned on the western side of the Sea of Galilee and is a popular spot for Israeli and international tourists alike. The town itself offers great views of the beautiful blue waters and the surrounding green hills. Tiberias is also considered to be one of the Jewish Four Holy Cities. Many people also use Tiberias as a jumping off point to explore the Golan Heights area.

Tiberias has a population of about 42,000. Most of the population is Jewish, as the majority of the Arab population was evacuated under British military protection in 1948. The city has an elevation of between -200 and 200 meters. The climate is a hot summer, Mediterranean climate combined with a hot semi-arid climate. The summers are very hot with highs climbing to around 97 degrees Fahrenheit and lows only dropping to 70 degrees Fahrenheit. The winters are mild and pleasant with temperatures ranging from 65 degrees Fahrenheit to 46 degrees Fahrenheit.

Within Tiberias itself you can see a handful of sights. These include Rambam's Tomb, the Church & Monastery of the Apostles, the tomb of Rabbi Moshe Ben Maimon, St Peter's Church, the Citadel, the Jewish Court, the Berko Park, the Khan, Al-Amari Mosque, the Tomb of Meir Ba'al Hanes, and the Antiquities Museum. Tiberias is also a fascinating place to observe Israelis on vacation. You'll see all types, from Hasidic Jews to Muslims and the nonreligious all intermingling and enjoying a vacation on the lake's shores.

Much of ancient and medieval Tiberias was destroyed by earthquakes and the majority of the construction prior to 1934 was wiped out by a flood. Following the Six-Day War there was wide scale development in the area including the construction of a waterfront promenade, the creation of parkland and shopping streets, and the development of restaurants and modern hotels. The remaining historic buildings, including several churches, two mosques, and several synagogues were preserved. There are also several remaining parts of the ancient wall, the Ottoman-era citadel and several other historic buildings.

One popular activity in Tiberias is to rent a bike and cycle around the lake. The trip is approximately 60 kilometers and takes close to a full day if you stop off at some sights along the way. If the weather is particularly hot, or you're not in the best shape, it is recommended that you get up early to begin your trip before the heat of the day. There are some great swimming beaches on the other side of the lake that can offer you a refreshing place to cool off and rest your legs. Also around the lake are some interesting sights that are of religious significance. These include Capernaum with the House of Peter, Kinnarot Cemetery, and Tabgha, where the Feeding of Multitude occurred.

Other activities around Tiberias include walking along the promenade, visiting the City Spa which has thermal and sulphur pools, and taking a swim in the lake.

Tiberias is a popular tourist destination, so there are plenty of restaurants that cater to all budgets. Falafel is a good, cheap option. There are also plenty of sweets available including ice cream and slushees.

Hostels in the area usually have a kitchen, so if you're on a particularly tight budget, it's possible to pick up ingredients and prepare your own meal. Confirm the quality of the kitchen before you book the room though, if you plan to rely on it.

Although there are less pubs and bars in Tiberias than in many Israel towns, there are a few decent places to grab a drink and hang out with fellow travelers. Ask around to find out what is recommended by the locals.

It's easy to reach Tiberias by bus from most major cities in Israel including Tel Aviv, Jerusalem, Haifa, and Nazareth. It's also easy to arrange an organized tour or drive yourself independently. Once you arrive in town, most of the city's attractions can easily be reached on foot. It's also popular to rent a bicycle to travel around the Sea of Galilee and see many of the major sights in the area. There are no shortage of hostels or restaurants around the town. If you choose to do a bike ride you can rent a bicycle from most of the hostels and some of the hotels. 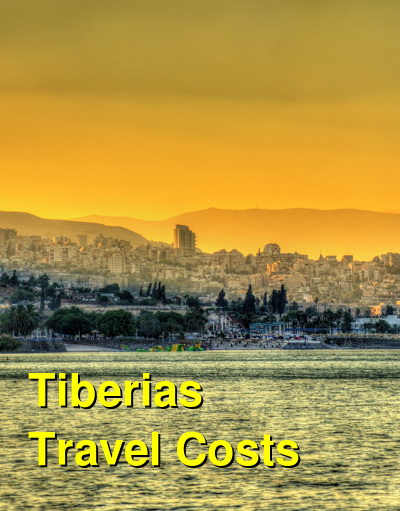 Biking Around the Sea of Galilee

By backpackguru
Many people recommend biking around the Sea of Galilee. This is a great way to see all of the sites around the lake, and it gives you an opportunity to take a plunge at one of the beaches on the other side of the lake. This is where most of the best swimming beaches are. You can rent a bike from most of the hotels and hostels around town for a reasonable price. It can be a longer bike ride than you expect. Some guidebooks mistakenly say it's an easy half day ride, while others say it requires to days. The reality is, if you're in descent shape it can be done in a day (but only a half day if you're in excellent shape and don't stop). You do need to get up and leave early to get back before the sunset and have time to linger at the sites. There are a few restaurants where you can grab lunch on the other side of the lake. Definitely take some time to swim, but don't misjudge the amount of time it will take you to get back. It can be a long ride.