How much does it cost to travel to Amman?

How much money will you need for your trip to Amman? You should plan to spend around JOD63 ($88) per day on your vacation in Amman, which is the average daily price based on the expenses of other visitors. Past travelers have spent, on average, JOD19 ($27) on meals for one day and JOD13 ($19) on local transportation. Also, the average hotel price in Amman for a couple is JOD55 ($78). So, a trip to Amman for two people for one week costs on average JOD876 ($1,235). All of these average travel prices have been collected from other travelers to help you plan your own travel budget.

A vacation to Amman for one week usually costs around JOD438 for one person. So, a trip to Amman for two people costs around JOD876 for one week. A trip for two weeks for two people costs JOD1,751 in Amman. If you're traveling as a family of three or four people, the price person often goes down because kid's tickets are cheaper and hotel rooms can be shared. If you travel slower over a longer period of time then your daily budget will also go down. Two people traveling together for one month in Amman can often have a lower daily budget per person than one person traveling alone for one week.


How expensive is Amman? How much money do I need for Amman?

How much does a trip to Amman cost? Is Amman expensive? The average Amman trip cost is broken down by category here. All of these Amman prices are calculated from the budgets of real travelers.

Looking for a hotel in Amman? Prices vary by location, date, season, and the level of luxury. See below for options.

How much does it cost to go to Amman? Naturally, it depends on the dates. We recommend Kayak because they can find the best deals across all airlines.

The price of renting a car in Amman will depends on dates, the type of car, the location, and your age. We recommend Kayak because they can find the best deals across all car rental companies.

What did other people spend on Transportation in Amman?

Typical prices for Transportation in Amman are listed below. These actual costs are from real travelers and can give you an idea of the prices in Amman, but your costs will vary based on your travel style.

What did other people spend on Food in Amman?

Typical prices for Food in Amman are listed below. These actual costs are from real travelers and can give you an idea of the prices in Amman, but your costs will vary based on your travel style.

Tips and Handouts Budget in Amman

Amman On a Budget 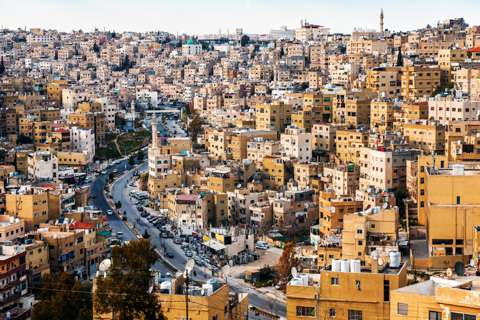 Amman
Amman is the largest city in of the Hashemite Kingdom of the country of Jordan. It is also the capital city of Jordan and has a population of over four million people. Many people use Amman as a base for venturing out into the rest of Jordan and other surrounding countries. There are many things to see and do in Amman.

Amman's Roman Amphitheater is a beautiful and historic sight in the city. Entrance to the theater also gets you access to a folklore and popular culture museum. Another museum that is worth seeing is the new Jordan Museum. It is very close to the city center of Amman and is also free. This museum is interactive with tons of exhibits that involve hands-on exhibits.

There are many buildings to see while visiting Amman. One is the Citadel, which is in the center of Amman. Another is the Ummayad Palace, which is actually a part of the citadel. The Temple of Hercules and the Byzantine Church are also historic buildings to see.

In general, there are two main regions of Amman. Western Amman is more of a lively and modern part of the city. This area is most likely where travelers would stay during their visit. Eastern Amman is much more residential and is where the working class lives. The newer downtown area of Amman is called Abdali Boulevard, while the old downtown area is called The Balad. Here you can get lost in alleyways and explore the small roads that wind all over the neighborhood. There are tons of markets in this area where you can buy foods and other goods.

A great activity is to watch the sunset from the viewing point at the Citadel. The view is outstanding and it is even more spectacular if you are there during the time of the muezzin call.

There are tons of places to shop around the city. As mentioned above, The Balad is very popular among tourists. There are not only markets here but also many different coffee shops, cafes, restaurants, spice shops, and tons of street art. Rainbow Street is another place to spend the day. It is a cobblestone street that has many shops and restaurants. Many say that this street has a hint of a European feel.

If you want to get out of the city, one of the best places to visit is the ancient city of Jerash. Here you'll find some fantastically preserved ruins and historical reenactments.

Not only is there a plethora of traditional Middle Eastern restaurant in Amman, there are also tons of places to get Western food and other types of food from around the world.

Traditional Arabic food usually consists of lamb or chicken, rice, flat bread, tomatoes, and cucumbers. Shawarma is a popular dish as well, which is cooked lamb with sauce rolled in flat bread. Falafel and hummus is a traditional snack as well. For the best shawarma in town, Shawermat Reem is apparently the best. It is a street kiosk located in the 2nd circle. Levant is a restaurant that serves gourmet Arabic food that uses fresh ingredients and has an English speaking staff. A great place to grab a sandwich is at Ameer, they have affordable food and it is recommended that you order a "batata", which is a French fry sandwich.

Queen Alia International Airport is the airport in town that most travelers arrive at. All foreign visitors must have an entry visa, which can be purchased at the airport upon arrival. The visa costs forty Jordanian dinars. There are money exchange options available before getting to passport control.

To get from this airport to Amman city, the best options are a taxi or the Airport Express Bus. A taxi will cost about twenty Jordanian dinars, while the express bus costs about three Jordanian dinars.

Once in the city of Amman, it can be a little tricky finding your way around the city. There are eight circles (roundabouts) of the city, and they are on Zahran Street and lead to downtown Amman, near the Citadel. Getting around by taxi is a great option; there are yellow and gray taxis that are available all over and can be flagged down from the side of the street. Make sure your taxi has a meter. You can also get around on the buses that run all over the city. Bus No. 26 runs between The Balad and the seventh circle. This is probably the best bus to take if you want to do some site seeing and shopping. Walking is not a great option in Amman. The city is very hilly and has no sidewalks.