How much does it cost to travel to Petra?

How much money will you need for your trip to Petra? You should plan to spend around JOD71 ($100) per day on your vacation in Petra, which is the average daily price based on the expenses of other visitors. Past travelers have spent, on average, JOD22 ($30) on meals for one day and JOD13 ($18) on local transportation. Also, the average hotel price in Petra for a couple is JOD67 ($94). So, a trip to Petra for two people for one week costs on average JOD993 ($1,401). All of these average travel prices have been collected from other travelers to help you plan your own travel budget.

A vacation to Petra for one week usually costs around JOD497 for one person. So, a trip to Petra for two people costs around JOD993 for one week. A trip for two weeks for two people costs JOD1,987 in Petra. If you're traveling as a family of three or four people, the price person often goes down because kid's tickets are cheaper and hotel rooms can be shared. If you travel slower over a longer period of time then your daily budget will also go down. Two people traveling together for one month in Petra can often have a lower daily budget per person than one person traveling alone for one week.


How expensive is Petra? How much money do I need for Petra?

How much does a trip to Petra cost? Is Petra expensive? The average Petra trip cost is broken down by category here. All of these Petra prices are calculated from the budgets of real travelers.

How much do vacation rentals cost in Petra? Prices vary by location, date, size of the place, and the level of luxury. See below for options.

What did other people spend on Food in Petra?

Typical prices for Food in Petra are listed below. These actual costs are from real travelers and can give you an idea of the prices in Petra, but your costs will vary based on your travel style.

How much does it cost to go to Petra? Naturally, it depends on the dates. We recommend Kayak because they can find the best deals across all airlines.

The price of renting a car in Petra will depends on dates, the type of car, the location, and your age. We recommend Kayak because they can find the best deals across all car rental companies.

What did other people spend on Entertainment in Petra?

Typical prices for Entertainment in Petra are listed below. These actual costs are from real travelers and can give you an idea of the prices in Petra, but your costs will vary based on your travel style.

Tips and Handouts Budget in Petra

What did other people spend on Water in Petra?

Typical prices for Water in Petra are listed below. These actual costs are from real travelers and can give you an idea of the prices in Petra, but your costs will vary based on your travel style.

Petra On a Budget 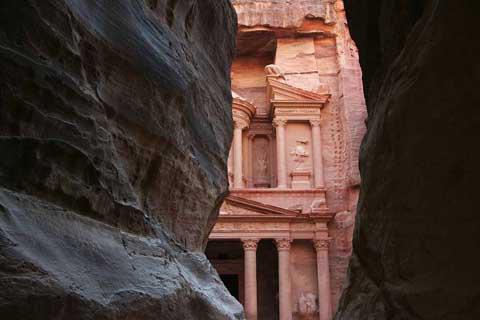 Petra
Whether you're checking off the Seven Wonders of the World, or you're just a huge Indiana Jones fan, the city of Petra must be on your bucket list. The "rose red city, half as old as time," was the capital of the Nabataean kingdom in the 6th century BC. It was the center for trade and commerce until an earthquake took out buildings and destroyed their water management system. After this destruction, the city of Petra seemed to be lost to western civilization.

Re-discovered by western explorers in the 1800s, Petra grew in popularity and by the 1920s it had become Jordan's most popular tourist attraction. It was featured in the 1989 movie Indiana Jones and the Last Crusade, and is now classified as a World Heritage Site by UNESCO.

There is one entrance to Petra, and it happens to be one of the highlights of the journey. The Siq, or canyon, is a spiritually important path leading to the city center. The 200-mile high walls are lined with stunning rock colors, formations, and minor carvings. Be sure to note the remains of terracotta pipes in the sides of the canyon. The Romans used these to carry their water. It's spectacular view and historical significance makes the Siq the perfect preparation for what lies just ahead.

One of the first things you'll see when you arrive in Petra is the Treasury. It's breathtakingly beautiful and the most iconic image of the area. Take a moment to admire the detailed carvings and architecture that have been there for centuries. Try to spot the urn on top of the Treasury. Legend has it, it contains the hidden treasure of a Pharaoh. If you look hard enough you'll see bullet marks where travelers over centuries have attempted to discover that treasure for themselves.

If you're up for a hike, and a stunning view, head up to the Monastery. One of the legendary monuments of Petra, the Monastery was built in the 3rd century BC as a Nabataean tomb. The ancient path of 800 steps can take visitors over an hour to climb, but don't take a donkey to the top. They aren't treated well and it's a depressing sight to see as you climb your way to the top.

For a unique look at one of the world's oldest cities, consider a Petra by night tour. Experience this centuries-old city under the light of the moon and stars. The only light allowed is candlelight, and you'll be immersed in Bedouin music. It may not be as impressive as seeing the majesty of the Treasury by day, but it's certainly a special experience.

When planning your trip to the area, you may want to check out this great overview of things to know before you visit Petra.

Wadi Musa is the main town next to the park that is the ruins of Petra. It is not a large place, but is packed with hotels and restaurants and other amenities that tourists would need or want. The town sits to the east of the park.

At the western end of town is the entrance to the ruins where tickets can be purchased. Then it's a long but beautiful walk to the west through The Siq and into the main ruins that make up Petra itself. The Treasury is the first "building" after the Siq, and then the valley stretches northwest where many of the other ruins are found. The Monastary is perched up high at the far western end of the park, overlooking the desert and Israel to the west.

If taking in the beauty of Petra is simply not exciting enough for you, there are some hikes and climbs to take advantage of. In fact, many of these activities should absolutely be part of your 5-day Jordan itinerary.

Begin at the High Place of Sacrifice and make the one hour trek to the city center. It's a beautiful hike - at the right time of day - covered with stones, statues and altars to admire along the way.

If you simply have to tackle the toughest challenge around, you can climb the Mountain of Aaron. It's the highest peak in Petra and takes anywhere between four and eight hours to scale At the top you'll be greeted with a small church and the tomb of Aaron - the brother of Moses.

If you're planning to visit the ruins for the entire day (and you should), then it's best to pack your own lunch. Many hotels and hostels will offer this service for you, and a variety of other dining options are around town near the park entrance.

The city of Petra only has one restaurant. Despite their steep prices, they bring in large crowds. Perhaps it's because they have the only beer in the valley! For snacks and drinks, however, there are small stores and vendors all around.

The summer can get very hot in Petra so staying hydrated is a must. In one day you'll likely drink at least four bottles of water.

In Wadi Musa, if you're looking for a good meal, check out Al-Wadi Restaurant on the main circle in town. Cleapetra restaurant is also a bargain, located just below the circle. Many of the hotels have restaurants and bars (especially the higher priced ones).

In Petra, there are no cars, no bicycles and no scooters. The only way to get around is by foot - yours or those belonging to a camel, horse or donkey. Beware of the horsemen offering rides into the city. They may say the ride is free, but during your trip they will hit you with a "tipping" fee.

Walking around Petra is very nice so long as you are reasonably fit and it's not too hot. You'll find most things in the shade around 3 pm.

If you're staying in Wadi Musa, most of the town is within walking distance to the entrance of the ruins (especially hotels). Many hotels offer shuttle services either in the form of vehicles or horse-drawn carts, and taxis are common.

Escaping the Crowds at Petra

By backpackguru in Entertainment
Petra is a stunning place to explore. It's been made famous by movies, and the crowds you see there reflect that. The best way to escape the crowds and have a personal experience at Petra (if that's possible), is to arrive early in the morning. Get there right when it opens, and then enjoy a few moments of solitude. Pack yourself a lunch so you can spend the whole day there. Then head back towards the back of the grounds. There are a few hikes, some more difficult than others, that will take you away from the tour groups. Petra is so much more than the Treasury. By getting there early, taking the time to do some good hikes, and spend a day or two there, you'll get to experience it all. After all, you did go all the way to Jordan.