How much does it cost to travel to Aqaba?

How much money will you need for your trip to Aqaba? You should plan to spend around JOD40 ($57) per day on your vacation in Aqaba, which is the average daily price based on the expenses of other visitors. Past travelers have spent, on average, JOD11 ($15) on meals for one day and JOD3.60 ($5.08) on local transportation. Also, the average hotel price in Aqaba for a couple is JOD55 ($78). So, a trip to Aqaba for two people for one week costs on average JOD561 ($792). All of these average travel prices have been collected from other travelers to help you plan your own travel budget.

A vacation to Aqaba for one week usually costs around JOD281 for one person. So, a trip to Aqaba for two people costs around JOD561 for one week. A trip for two weeks for two people costs JOD1,123 in Aqaba. If you're traveling as a family of three or four people, the price person often goes down because kid's tickets are cheaper and hotel rooms can be shared. If you travel slower over a longer period of time then your daily budget will also go down. Two people traveling together for one month in Aqaba can often have a lower daily budget per person than one person traveling alone for one week.


How expensive is Aqaba? How much money do I need for Aqaba?

How much does a trip to Aqaba cost? Is Aqaba expensive? The average Aqaba trip cost is broken down by category here. All of these Aqaba prices are calculated from the budgets of real travelers.

Find a hostel, guesthouse, or B&B in Aqaba

How much does it cost to go to Aqaba? Naturally, it depends on the dates. We recommend SkyScanner or Kayak because they can find the best deals across all airlines.

Tips and Handouts Budget in Aqaba

Aqaba On a Budget

Aqaba, Jordan
Aqaba is a port city in Jordan, in fact, it is the only port city in the country. This city is located on the Gulf of Aqaba on the Red Sea, which is in the southern part of Jordan. The city is still being developed; many of its facilities and infrastructures are being improved. The population of Aqaba is about 190,000 and the city has been key in developing Jordan's economy via trade and tourism.

Aqaba is an ancient city, with many historic buildings and landmarks. The Aqaba Fort is an example of this; the fort was built in the early 1500's for the purpose of housing pilgrims on their way to Mecca. Another historic site is the city of Ayla, which was the first city founded outside of the Arabian Peninsula. The ruins are part of present-day Aqaba, located northwest of the city center near the Movenpick Resort.

The Aqaba Archaeological Museum is worth seeing. It is located very close to the Aqaba Fort. The museum exhibits ancient artifacts dating back to the 7th century AD. Recently, the "Lady of Aqaba", a Bronze Age artifact, was discovered in Tall Hujayrat Al-Ghuzlan. This artifact dates back to 4000 BC, which confirms that Aqaba is one of the oldest settlements in this region. This artifact is housed at the museum where there is much more information on its discovery.

The Aqaba Heritage Museum is another historic sight. It depicts many different items portraying the heritage of Aqaba as well as life-size replicas of traditional life in the city. You will also find historic images from the start of the last century up until present day. The admission to this museum is free.

The world's oldest Christian church is located in Aqaba. It was a purpose-built church that was discovered in 1998 and was considered to be built in the third century. Make sure to check it out while visiting Aqaba.

Aqaba is Jordan's only port city. Strategically, it is a crossroad between Asia, Europe, and Africa and it directly borders Israel, Saudi Arabia, and Egypt. Eilat is another port town nearby, which is in southern Israel.

As a whole, Jordan is split up into twelve administrative divisions, called Governorates. Aqaba Governorate is divided into three smaller divisions called Nahias. These Nahias are then split into neighborhoods and villages.

The main attraction in Aqaba is scuba diving. There are tons of companies offering PADI courses, or expeditions for dive masters. Aqaba's Anchor Diving Centre, Ahlan Aqaba Scuba Diving Center, and Red Sea Dive Center are great places to start. The reefs in Aqaba are known as some of the best in the entire world.

There are many luxury hotels in Aqaba, which all offer snorkel and scuba activities. There are also great beaches in the area where you can spend the day relaxing.

A common dish on the coastal cities in this region is Sayadeyah, which combines rice, fish and spices. Kishnah is another one that incorporates fish, tomatoes and onions. A popular dessert consists of dates dipped in ghee (a type of butter). The Red Sea Grill has many of these traditional options and is located on King Hussein Street. There is a great Italian restaurant in town as well, called Casalingo on South Beach Road.

King Hussein International Airport is located about twenty minutes from Aqaba. You can also take a ferry to Aqaba from the surrounding ports in Egypt, Saudi Arabia and Israel. Passing through Israel can be tricky at time due to border arrangements. When entering Jordan through Aqaba, there are no visa fees since it is considered part of the free trade zone. If you are coming from Amman, a northern city in Jordan, there are frequent buses that are very affordable. It is a long journey though, as there are many security points along the way where each passenger needs to show identification.

Once in the city, taxis are an affordable and easy option. The taxis in Aqaba are green and blue and shouldn't cost more than two JD within the city. If you are going outside of the city, it should cost about five JD. Keep in mind that if you ask your hotel to call you a taxi, the prices will be almost double because they receive a cut of the profit. It may be easier to just flag one down yourself. There are minibuses that run between the city center and residential neighborhoods. The bus station is located on King Talal Street, in front of the police station. 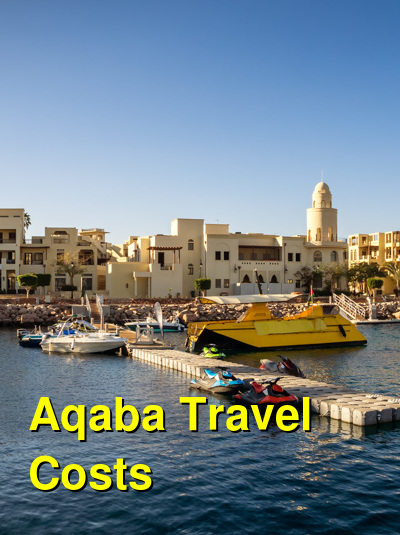