How much does it cost to travel to Riga?

How much money will you need for your trip to Riga? You should plan to spend around €82 ($90) per day on your vacation in Riga, which is the average daily price based on the expenses of other visitors. Past travelers have spent, on average, €26 ($28) on meals for one day and €12 ($13) on local transportation. Also, the average hotel price in Riga for a couple is €85 ($92). So, a trip to Riga for two people for one week costs on average €1,154 ($1,255). All of these average travel prices have been collected from other travelers to help you plan your own travel budget.

A vacation to Riga for one week usually costs around €577 for one person. So, a trip to Riga for two people costs around €1,154 for one week. A trip for two weeks for two people costs €2,309 in Riga. If you're traveling as a family of three or four people, the price person often goes down because kid's tickets are cheaper and hotel rooms can be shared. If you travel slower over a longer period of time then your daily budget will also go down. Two people traveling together for one month in Riga can often have a lower daily budget per person than one person traveling alone for one week.


How expensive is Riga? How much money do I need for Riga?

How much does a trip to Riga cost? Is Riga expensive? The average Riga trip cost is broken down by category here. All of these Riga prices are calculated from the budgets of real travelers.

Looking for a hotel in Riga? Prices vary by location, date, season, and the level of luxury. See below for options.

How much does it cost to go to Riga? Naturally, it depends on the dates. We recommend Kayak because they can find the best deals across all airlines.

The price of renting a car in Riga will depends on dates, the type of car, the location, and your age. We recommend Kayak because they can find the best deals across all car rental companies.

What did other people spend on Food in Riga?

Typical prices for Food in Riga are listed below. These actual costs are from real travelers and can give you an idea of the prices in Riga, but your costs will vary based on your travel style.

What did other people spend on Water in Riga?

Typical prices for Water in Riga are listed below. These actual costs are from real travelers and can give you an idea of the prices in Riga, but your costs will vary based on your travel style.

Riga On a Budget 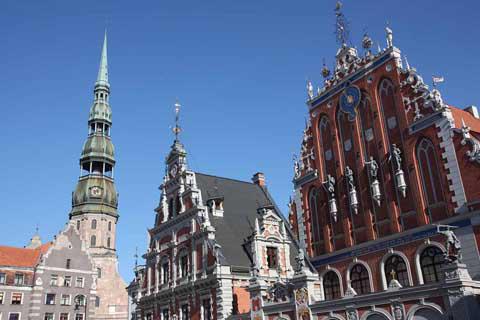 Riga
Riga is the vibrant capital city of Latvia. It continues to gain popularity as a tourist destination in part because it is the base for the airline Air Baltic. This affordable airline offers discount flights around Europe and most of these flights pass through Riga with a forced overnight layover. This encourages travelers to visit this fascinating city for at least a night or two.

Riga is also a very affordable destination. It's popular with young travelers because it has a vibrant nightlife and there are many unique and interesting bars and clubs that offer low cost drinks and entertainment. The city's old town also has a lot to offer in the form of interesting architecture, museums, restaurants and tours. There's a very large market near the old town that sells anything and everything from meats, to smoked salmon, to clothes and flowers. It's a great place to people watch or you can pick up some food for a picnic lunch. It's definitely worth a visit while you're in the area.

Most visitors to Riga spend their time in the city's Old Town. Popular sights include Triangula Bastion, the Museum of the Occupation of Latvia, St. Peter's Church, St. John's Church, the Big Guild, The House of the Black Cat, Riga Cathedral, the Museum of the Barricades of 1991, and Freedom Monument, among many other things.

Riga is split into two areas by the River Daugava. The Old Town is at the center of the city on the east side of the river. Outside of the Old Town is a ring of 19th and 20th century architecture and then further out there are private houses and apartments. As a tourist you'll probably spend most of your time in the Old Town and in the area around the Freedom Monument, which is close by. There are some interesting area's outside of this district though that are often overlooked by tourists. These include Agenskalns and Tornakalns which are just over the Stone Bridge.

As a large, cosmopolitan city, there are many activities you can enjoy during your time in Riga. You can see either the opera or ballet at the Latvian National Opera. This is a nice building that is worth checking out. The Latvian National Symphonic Orchestra also has shows occasionally. Another unique experience in the city is to try your hand at bobsledding. You can ride in a professional winter bobsled between the months of November and March. It's a rare experience and one worth trying if you're in the area.

Riga has a diverse range of restaurants that offer everything from international cuisine to local Latvian specialties. Latvian cuisine is usually quite hearty and makes use of ingredients such as potatoes, cabbage, beef, pork and fish. The cheapest restaurants in town are the cafeteria style options. You can choose from any number of dishes, most frequently dumplings, and then pay by the weight of your food selection. If you're interested in trying an international restaurant then your options include sushi, Chinese and Indian among others.

The old town area in Riga is easy to walk around. Most of the streets are asphalt and where they are cobblestoned it is usually flat and even. Taxis are reasonably priced but you must be diligent to make sure they take the shortest route to your destination.

If you're hoping to venture outside of the old town, Riga has a wonderful network of trams, buses and trolleybuses. It's generally thorough and comprehensive and is usually your best option for traveling around the city. Trams are usually your fastest option with the exception of trains. Trams operate on street level and are not separated from the rest of the traffic, but they usually have the right of way. During rush hour, however, congestion may slow the trip down significantly so plan accordingly. Minibuses are usually your second best option as they are smaller and more maneuverable than the larger buses and trolley buses.

Train and Bus Prices
The best prices for buses and trains in Latvia can be found on Omio (formerly GoEuro). They let you search across all train, bus, and plane routes throughout the region.

By wanderinggurl in Food
Check out the Riga Central Market near the bus station if you're looking for an interesting experience with the locals. You can buy some cheap food and make yourself a meal or just wander through the stalls and people watch. It's definitely worth checking out the cheese and dessert sections!