How much does it cost to travel to Mount Everest?

How much money will you need for your trip to Mount Everest? You should plan to spend around NP₨4,259 ($33) per day on your vacation in Mount Everest, which is the average daily price based on the expenses of other visitors. Past travelers have spent, on average, NP₨2,800 ($21) on meals for one day. Also, the average hotel price in Mount Everest for a couple is NP₨1,457 ($11). So, a trip to Mount Everest for two people for one week costs on average NP₨59,630 ($457). All of these average travel prices have been collected from other travelers to help you plan your own travel budget.

Looking for a hotel in Mount Everest? Prices vary by location, date, season, and the level of luxury. See below for options.

Mount Everest On a Budget 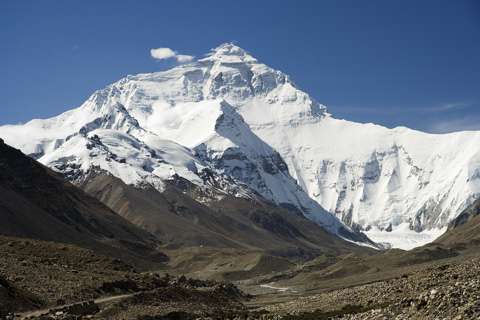 Mount Everest
More commonly known as Mount Everest, Qomolangma is the highest mountain in the world with a peak reaching 8,848 meters above sea level. Pilgrims trek long distances to worship its divine aura, climbing enthusiasts run great risks to challenge its high altitude, and visitors from all over come to see where the tallest reaches of earth meet the heavens.

In such a remote location, the main hub of activity at the foot of Qomolangma is the Everest Base Camp. Tent hostels are available here April through November. Each tent hostel has ten beds with quilts, with access to hot water (no showers), Chinese food and stoves for warmth, limited medical supplies, and low voltage electric lights that shut off at midnight. This is the main starting and end point for trekkers embarking on the climb up the mountain, but also for trekkers who come from further away to end their trek here just to see the mountain in person. The nearest guest house is as Rongbuk Monastery, 3.6 km (2.2 miles) north of Everest Base camp. It is also common for visitors to stay in private houses of the welcoming locals. If you're considering trekking, check out this guide to what it is really like to trek to Everest Base Camp.

The mountain itself is a sight to behold, the undeniable centerpiece of the region. Its snowcapped peaks glisten in the sun, beckoning to those below who wish to reach the summit. A wisp of cloud often touches its peak like a flag signaling the final destination for climbers - commonly called the Flag Cloud. Weather amidst the mountains, however, is often unpredictable with storms and squalls rolling in at a moment's notice. The best season to visit is May to October, though the peak is often covered in clouds from July to August. November to February is usually unfavorable due to the extreme cold.

Other features of the mountain include its bright glaciers, diverse plant life, and a variety of wild animals like the rare snow leopard. Rongbuk Monastery is also a popular destination, located at the base of the mountain with magnificent views of its peak.

But you don't just have to climb to the top. Many travelers make the trek from lower areas up to the famous Everest Base Camp. This trek can be done without climbing equipment or camping gear, as it's just a (challenging) walk and you can stay in the local villages where you can find food and accommodations. The difficulty of the Everest Base Camp Trek often depends on your level of fitness and hiking experience.

This monastery is the highest in the world, making it a very spiritual destination for many and an enlightening way to end the treacherous climb of the mountain. In addition to the panoramic views from the monastery, it is also home to impressive murals of Tibetan religion and culture as well as beautiful statues of Buddhist deities.

Traditional Tibetan cuisine is largely limited to barley, meat (usually mutton or yak), and dairy products. Very few spices and vegetables are used in the cooking, though most dishes are served with a very hot chili sauce on the side. Tibetan restaurants also usually serve westernized food options, and there are an abundance of good Chinese restaurants as well. Tea houses, too, can be found just about everywhere, being a place where many locals come to sit down with friends. While larger towns and cities serve both sweet and salted teas, smaller villages only serve salted. Due to its remote location, the main food available around the mountain is fine dried or instant noodles. Nearby, food is also available at Benba Guesthouse in Tashidzom and the Snowman Hotel in Pasum. It is usually good to be stocked up with your own small supply of food and water.

As far as food and drink go throughout Tibet, some staples include:

Climbing the mountain, or simply reaching Everest Base Camp for a great view, depends on your ability to get there. As Everest Base Camp is a final destination for many visitors, the journey to that location is an adventure in of itself. The trek begins in Lukla, which can be reached by air from Kathmandu, or by bus. From Lukla the hike to Everest base camp takes around 7 days, depending on one's desire to hike fast or slow. Along the way are many small villages, monasteries, and "tea houses" which provide food and hotel-like accommodation to hikers. Although conditions are rustic, camping is not necessary before Everest Base Camp for those willing to spend a bit of money.

Hiring guides and/or baggage porters is common and generally recommended.

On the Chinese side, visitors can fly to Lhasa (to Gonggar Airport) from major cities in China, or take a train via Xining. Many people hire a 4-wheel-drive from Lhasa to Rongbuk Monastery, which is located at the foot of the mountain. The road conditions are good from Lhasa to Tingri, but when you drive off the national road, it turns to an all dirt and gravel road. The closer you get to the mountain, the more rugged the travel becomes.