How much does it cost to travel to Islamabad?

How much money will you need for your trip to Islamabad? You should plan to spend around P₨9,223 ($37) per day on your vacation in Islamabad, which is the average daily price based on the expenses of other visitors. Past travelers have spent, on average, P₨3,303 ($13) on meals for one day and P₨1,703 ($6.79) on local transportation. Also, the average hotel price in Islamabad for a couple is P₨9,086 ($36). So, a trip to Islamabad for two people for one week costs on average P₨129,123 ($515). All of these average travel prices have been collected from other travelers to help you plan your own travel budget.

A vacation to Islamabad for one week usually costs around P₨64,562 for one person. So, a trip to Islamabad for two people costs around P₨129,123 for one week. A trip for two weeks for two people costs P₨258,247 in Islamabad. If you're traveling as a family of three or four people, the price person often goes down because kid's tickets are cheaper and hotel rooms can be shared. If you travel slower over a longer period of time then your daily budget will also go down. Two people traveling together for one month in Islamabad can often have a lower daily budget per person than one person traveling alone for one week.


How expensive is Islamabad? How much money do I need for Islamabad?

How much does a trip to Islamabad cost? Is Islamabad expensive? The average Islamabad trip cost is broken down by category here. All of these Islamabad prices are calculated from the budgets of real travelers.

Looking for a hotel in Islamabad? Prices vary by location, date, season, and the level of luxury. See below for options.

How much does it cost to go to Islamabad? Naturally, it depends on the dates. We recommend Kayak because they can find the best deals across all airlines.

The price of renting a car in Islamabad will depends on dates, the type of car, the location, and your age. We recommend Kayak because they can find the best deals across all car rental companies.

Islamabad On a Budget 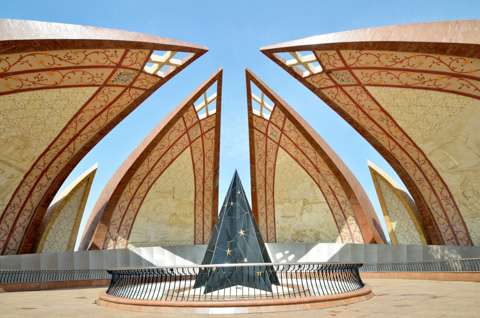 Islamabad, Pakistan
Islamabad is the capital of Pakistan, specially built in the 1960's to replace the former capital, Karachi. Most of the city's population are employees of the government, though many people come from all over Pakistan to enjoy the city's peaceful atmosphere and green spaces, museums, and monuments.

The best of Islamabad is to be had looking out to the beautiful scenery and green spaces that are abundant in and around the city. Serving as the backdrop to the north, for example, are the Margalla Hills within Margalla Hills National Park. Foothills to the Himalayas, these tree-covered mountains provide access to waterfalls, hiking trails, and plenty of wildlife. Also in these hills is Daman-e-Koh, a viewing point and hilltop garden with sweeping views of the city, Faisal Mosque, and Rawal Lake.

The Mosque is an iconic landmark of the city, featuring a contemporary design inspired by a Bedouin tent, built in 1987. The lake is another opportunity to experience Islamabad's plentiful green space, supplying water to Islamabad and neighboring Rawalpindi, while also providing a scenic location for picnics, boating, fishing, wildlife viewing.

At the very center of the city, Shakarparian National Park offers additional respite. Not only is it a lush green hill, but it is also site to the National Star and Crescent Monument, representing Pakistan's flag. Nearby, visitors can also see the Lok Virsa Museum, which preserves the folk and traditional cultural legacies of Pakistan with displays of embroidered costumes, jewelry, musical instruments, woodwork, utensils and many more artifacts of folkloric significance.

Greater Islamabad is generally divided into eight zones: Administrative Zone, Commercial District, Educational Sector, Industrial Sector, Diplomatic Enclave, Residential Areas, Rural Areas, and Green Area. The city itself, however, consists of five zones all named by number. Zones I and II are both residential sectors - I is developed, and II is under-developed. Zone III encompasses the Margalla Hills and Margalla Hills National Park, as well as Rawal Lake. Zones IV and V consist of Islamabad Park and rural areas of the city, with Zone V being the largest of the sectors. The hub of activity is concentrated largely in Zone I, radiating outwards into Zone III. To the south of Islamabad is the sister city of Rawalpindi, which operates independently. Islamabad is the center of all governmental activities, while Rawalpindi is the hub for industrial, commercial, and military activities.

Islamabad's many green spaces and unique scenery make it a great location to enjoy the outdoors. The wide range of activities includes things like hiking, rock climbing, cycling, horseback riding, fishing, boating, paragliding, and much more. Visitors can also stop at the Islamabad Zoo, which houses more than 300 animals. There are many parks and overlooks worth exploring, as well as mosques, shrines, and monuments to admire throughout the city.

While the Lok Virsa Museum is the most popular museum as far as local history goes, other popular museums of Islamabad include Golra Pakistan Railways Heritage Museum, the Pakistan Museum of Natural History, National Art Museum, and many additional privately owned galleries.

Cuisine of Pakistan largely revolves around kebabs served with rice or flatbreads. Kebabs are cooked meat dishes that can vary with different kinds of beef, lamb, and chicken all seasoned with herbs and spices. There are also a variety of flatbreads, usually referred to as naan, which are commonly used to pick up and eat liquid foods as utensils are not commonly used with meals in Pakistan. Other popular Pakistani specialties include a whole roasted chicken called charga, a seasoned chicken and rice dish called biryani, a spicy barbequed chicken called chicken tikka, a thick stew-like mix of meat, lentils, and wheat grains called haleem, and a thick gravy made from local spices and either chicken or beef called nihari. A vegetarian soup called daal is also common as are black and green teas. Flavored with cardamom and a lot of sugar, tea is referred to as chai in Pakistan. As a metropolitan city, Islamabad will have a full range of these traditional dishes as well as a variety of American, European, and British restaurants.

Islamabad International Airport is the main international airport of the Islamabad-Rawalpindi metropolitan area and suburbs, and the largest airport in Pakistan by passenger capacity. It is served by many airlines including Pakistan International Airlines, Qatar Airways, British Airways, Airblue, Emirates, and many others.