How much does it cost to travel to Panama City?

How much money will you need for your trip to Panama City? You should plan to spend around B/.68 ($68) per day on your vacation in Panama City, which is the average daily price based on the expenses of other visitors. Past travelers have spent, on average, B/.17 ($17) on meals for one day and B/.8.54 ($8.54) on local transportation. Also, the average hotel price in Panama City for a couple is B/.55 ($55). So, a trip to Panama City for two people for one week costs on average B/.958 ($958). All of these average travel prices have been collected from other travelers to help you plan your own travel budget.

A vacation to Panama City for one week usually costs around B/.479 for one person. So, a trip to Panama City for two people costs around B/.958 for one week. A trip for two weeks for two people costs B/.1,915 in Panama City. If you're traveling as a family of three or four people, the price person often goes down because kid's tickets are cheaper and hotel rooms can be shared. If you travel slower over a longer period of time then your daily budget will also go down. Two people traveling together for one month in Panama City can often have a lower daily budget per person than one person traveling alone for one week.

How much does a trip to Panama City cost? Is Panama City expensive? The average Panama City trip cost is broken down by category here. All of these Panama City prices are calculated from the budgets of real travelers.

How much do vacation rentals cost in Panama City? Prices vary by location, date, size of the place, and the level of luxury. See below for options.

What did other people spend on Food in Panama City?

Typical prices for Food in Panama City are listed below. These actual costs are from real travelers and can give you an idea of the prices in Panama City, but your costs will vary based on your travel style.

How much does it cost to go to Panama City? Naturally, it depends on the dates. We recommend SkyScanner because they can find the best deals across all airlines.

The price of renting a car in Panama City will depends on dates, the type of car, the location, and your age. We recommend SkyScanner because they can find the best deals across all car rental companies.

Panama City On a Budget

Panama City, Panama
Panama City is the cosmopolitan capital city of the country of Panama. With a population of almost 900,000 and almost 1.5 million in the metropolitan area, it's a very diverse city with expat residents from all over the world. You don't have to search far to find someone who speaks English, and many Panamanians are quite helpful and friendly.

The city is the most modern in all of Central America. The skyline has a large number of skyscrapers and high rise buildings, and the city continues to grow in wealth and prosperity.

Panama City's climate is tropical wet and dry. The wet season is between May and December and the dry season is from January through April. The temperatures are relatively constant throughout the year with an average temperature of about 81 degrees Fahrenheit.

There are some wonderful, world renowned sights around Panama City, with the most famous being the legendary Panama Canal. The most convenient and cheapest place to see the canal is at the Miraflores locks, where you can watch the boats travel through the canal. There's also a museum, movie theater, and expensive restaurant nearby. You can reach the locks by taxi for about US$6 one way.

Panama City is a large city with many interesting neighborhoods worth visiting. Amador Causeway is a man-made peninsula on the southern part of the city. It's a great dining and entertainment area with nice views of the skyline.

Balboa, Cerro Ancon, and Albrook are all quiet, residential neighborhoods that are in the former Canal Zone. This is also where you'll find the domestic airport, Albrook.

Calidonia and La Exposicion are experiencing much of the city's growth. There are high rise developments and also budget accommodation, but there are safer and more enjoyable neighborhoods elsewhere in the city so this area is not recommended.

Casco Viejo and San Felipe are nice areas with houses that date back to the 1800s. This area has been made a UNESCO World Heritage Site and is being nicely restored.

Along the coastline in Marbella, Punta Paitilla, and Punta Pacifica where there are many residential towers and shopping malls.

El Cangrejo, Area Bancaria, and Bella Vista make up a compact, upscale area that has a lot of charm. The Financial District is in Area Bancaria and there are many great places to stay in El Cangrejo.

Panama Viejo is the on the eastern edge of the city. This was the first settlement in Panama but it was later burned. It's possible to visit this area as part of a walking tour.

As a large, modern city, there are plenty of activities that you can enjoy while you're in Panama City. There are several Spanish Language schools in the city. This is a great place to learn or improve your Spanish skills in a fun and upbeat setting.

There are also plenty of shopping opportunities throughout the city. You'll find many street markets in the Caledonia area. There are many malls in the city including the Albrook Shopping Mall where you can find affordable clothes and entertainment such as bowling, movie theaters, and arcades. For more traditional Panamanian crafts head to the shops in the Centro de Artesanias. This is in the Balboa neighborhood.

There are many traditional Panamanian restaurants throughout the city. The prices range from affordable to expensive and the quality is usually quite good.

If you're looking for a cheap meal, there are many cafes around town that sell sandwiches that are quite good. Also head to the fish market outside of Casco Viejo where you can find some fresh, cheap,and delicious options. If you're looking for something other than traditional food, there are great and affordable Chinese restaurants all over town.

Panama City has a decent bus system and this is the cheapest option for exploring the city. The buses can get very crowded during rush hour, but their festive colors make for a fun experience. In recent years the colorful old buses have slowly been replaced by newer, air conditioned buses. The final destination of the bus is usually written on the top.

Alternatively, the easiest and most convenient way to travel around Panama City is by taxi. Taxis do not have a meter, but the driver should have a table available that will tell you the cost based on your starting and ending locations. Prices are set by the authorities and there will be an additional fee for every extra passenger.

In 2014 Panama City opened it's Metro system. It is a clean and affordable travel option. The Metro goes between the Albrook Mall/International Bus Station, through Panama City to the town of Los Andes. This covers about eight miles but does not go near many of the tourist destinations. 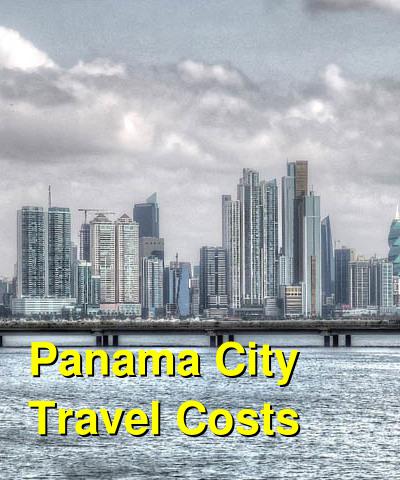