How much does it cost to travel to Piriapolis?

How much money will you need for your trip to Piriapolis? You should plan to spend around $U2,069 ($53) per day on your vacation in Piriapolis, which is the average daily price based on the expenses of other visitors. Past travelers have spent, on average, $U707 ($18) on meals for one day and $U970 ($25) on local transportation. Also, the average hotel price in Piriapolis for a couple is $U1,664 ($42). So, a trip to Piriapolis for two people for one week costs on average $U28,973 ($738). All of these average travel prices have been collected from other travelers to help you plan your own travel budget.

A vacation to Piriapolis for one week usually costs around $U14,486 for one person. So, a trip to Piriapolis for two people costs around $U28,973 for one week. A trip for two weeks for two people costs $U57,946 in Piriapolis. If you're traveling as a family of three or four people, the price person often goes down because kid's tickets are cheaper and hotel rooms can be shared. If you travel slower over a longer period of time then your daily budget will also go down. Two people traveling together for one month in Piriapolis can often have a lower daily budget per person than one person traveling alone for one week.


How expensive is Piriapolis? How much money do I need for Piriapolis?

How much does a trip to Piriapolis cost? Is Piriapolis expensive? The average Piriapolis trip cost is broken down by category here. All of these Piriapolis prices are calculated from the budgets of real travelers.

Looking for a hotel in Piriapolis? Prices vary by location, date, season, and the level of luxury. See below for options.

How much does it cost to go to Piriapolis? Naturally, it depends on the dates. We recommend Kayak because they can find the best deals across all airlines.

The price of renting a car in Piriapolis will depends on dates, the type of car, the location, and your age. We recommend Kayak because they can find the best deals across all car rental companies.

Piriapolis On a Budget 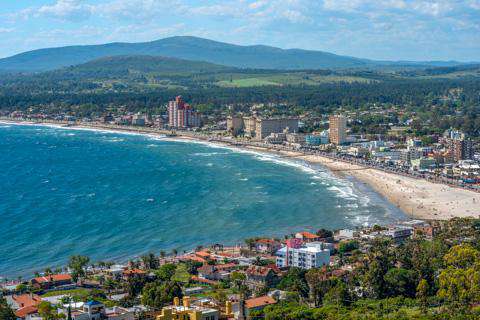 Piriapolis, Uruguay
Piriapolis is a small beach town between Montevideo and Punta del Este in Uruguay. It is a more laid back version of Punta del Este with fewer fancy restaurants and clubs but it has perhaps more charm, with its grand old hotel and beachfront promenade backed by small mountains. The rather old-school coastal resort is vaguely reminiscent of a Mediterranean beach town.

Port Piriapolis is one of the most delightful corners of the city. Ideal to enjoy lunch or behold sunset while sitting on its large rocks, Port Piriapolis is a modern and safe site, specially designed for sport watercrafts. Almost at the end of the port lies one of the most popular attractions of Piriapolis, the chairlifts leading to San Antonio Hill. There are several alternatives to go up to its summit, you can take the chairlift, the car or the bus and also go by foot. As the chairlifts gain height, visitors may catch a glimpse of the whole City of Piriapolis including the port, the watercrafts, the lighthouse, the hills, the beaches and the vastness of the sea. Half way between the Districts of Piriapolis and Minas, stands the Sugar Loaf Mountain. Whoever heads for the eastern beaches can always spot it on the way, but very few people resolve to take a detour from the main road and get close to its base. The Sugar Loaf Mountain is approximately four hundred meters high and its summit displays a unique panoramic view of the City of Piriapolis and its immense sea. The Sugar Loaf tour is a popular activity among visitors to Piriapolis and it is certainly worth visiting. However, many people are not aware of the fact that the matchless panoramic view they may appreciate once on its top is not the only attraction in this site. The Sugar loaf native wildlife and breeding station operates at the foot of the hill in an animal reserve, which may be seen in a ninety-minute tour. This zoo offers a great option for those who do not wish to climb up to the top of the Sugar Loaf.

Just 88 kilometers away from Montevideo and 8km from Piriapolis, in the heart of the District of Maldonado, there lies Las Flores, a perfect seaside resort to visit in the company of family members and especially children. Most of the houses in this location feature diverse styles and colors and lie a few meters away from the beach. The beach combines fine sand and rocks. The waters are usually calm and feature turquoise tints. You can also head to Punta Colorada, just 5 kilometers away from Piriapolis towards the East, where you will find delightful beaches. Another peninsula, located on the east, about 6 kilometers away is Punta Negra. Its large rocks adopt a darker shade but it is a swim hole that shares several features with Punta Colorada such as large beaches, thick forests hiding cabins and resorts for families to enjoy.

Cycle around the beautiful city of Piriapolis to get from site to site and fully cover this wonderful city and its surroundings in a few kilometers during a unique ride. Almost all the action happens in the 10-block stretch of beachfront between Avenida Artigas and Avenida Piria. Streets back from the beach are more residential. A handicrafts market called La Pasiva is located on the waterfront promenade, a few meters away from Hotel Argentino and next to the old Hotel Piriapolis. You will find hundreds of stands hosted by Uruguayan craftsmen who offer a wide array of original products. Piriapolis was developed for tourism in the early 20th century by Uruguayan entrepreneur Francisco Piria, who built the imposing landmark Argentino Hotel and an eccentric hillside residence known as Castillo de Piria (Piria's Castle). Argentino Hotel is an amazing architectural work, built in 1930, perfect to stay and enjoy the stately rooms and the imposing view of the Sugar Loaf on one side and the promenade along the sea on the other. However, at present the hotel is also opened for all vacationers in the area to enjoy and visit. The first floor might be considered a historical museum that unveils the summer customs in the early and middle twentieth century. Piria's Castle is also a great place to visit. This beautiful residence copied its architectural style from some Italian villages from the late XIX century. In addition to the old palm trees, the garden shelters a brass statue representing the Roman deity Mercury, an exact replica of the figure found in the Ercolano excavations in Italy.

Uruguayan cuisine has a lot of European influence, especially from Italy and Spain, though expect to find a lot more meat due to the country's abundant production of beef. The national drink of Uruguay is Grappamiel made from alcohol and honey. However, just like in Argentina, you will find many Uruguayans walking around with a thermos flask and a special cup for their famous hot drink called Mate. Piriapolis offers many restaurants options and has particularly good seafood due to its close proximity to the sea.