How much does it cost to travel to Leuven?

How much money will you need for your trip to Leuven? You should plan to spend around €142 ($155) per day on your vacation in Leuven, which is the average daily price based on the expenses of other visitors. Past travelers have spent, on average, €39 ($43) on meals for one day and €49 ($53) on local transportation. Also, the average hotel price in Leuven for a couple is €148 ($161). So, a trip to Leuven for two people for one week costs on average €1,993 ($2,167). All of these average travel prices have been collected from other travelers to help you plan your own travel budget.

A vacation to Leuven for one week usually costs around €997 for one person. So, a trip to Leuven for two people costs around €1,993 for one week. A trip for two weeks for two people costs €3,987 in Leuven. If you're traveling as a family of three or four people, the price person often goes down because kid's tickets are cheaper and hotel rooms can be shared. If you travel slower over a longer period of time then your daily budget will also go down. Two people traveling together for one month in Leuven can often have a lower daily budget per person than one person traveling alone for one week.


How expensive is Leuven? How much money do I need for Leuven?

How much does a trip to Leuven cost? Is Leuven expensive? The average Leuven trip cost is broken down by category here. All of these Leuven prices are calculated from the budgets of real travelers.

Looking for a hotel in Leuven? Prices vary by location, date, season, and the level of luxury. See below for options.

How much does it cost to go to Leuven? Naturally, it depends on the dates. We recommend Kayak because they can find the best deals across all airlines.

The price of renting a car in Leuven will depends on dates, the type of car, the location, and your age. We recommend Kayak because they can find the best deals across all car rental companies.

Leuven On a Budget 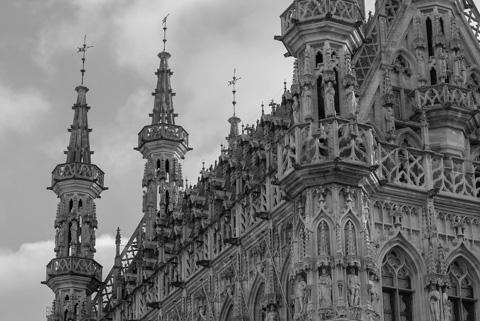 Leuven, Belgium
Lying just east of Brussels, Leuven is a Belgian city and capital of the Province of Flemish Brabant known for its breweries, historic architecture, and university. Because of the university, the town is at its busiest during the academic year (September through June), but there is plenty to see and do during all seasons.

The Katholieke Universiteit Leuven, abbreviated KU Leuven, is a university that conducts teaching and research in the sciences, engineering, humanities, medicine, law, and social sciences. It is also the oldest Catholic University in the world still in existence, founded in 1425. Although much of the city suffered damage during both World Wars, the historic center has been preserved and buildings like the University Library have since been restored.

Leuven also contains two UNESCO World Heritage Sites. One of these sites is the Groot Begijnhof (Grand Beguinage), which includes a completely restored historical quarter south of downtown Leuven. It is also one of the largest remaining beguinages (an architectural complex created to house beguines, or religious women) in the Low Countries. The second UNESCO site is St Peter’s Church, whose belfry is a part of the Belfries of Belgium and France. The University buildings and Leuven's historic center are also on Belgium’s tentative list to become a World Heritage Sites.

Another impressive site is the Leuven Town Hall whose Gothic edifice is decorated with hundreds of statues of local figures, biblical characters, and saints.

In Leuven, the best place to start to orient oneself is at the center. Old Market, or Oude Markt, lies in the midst of it all. Not only is the market a pedestrian area, but there are also plenty of restaurants and cafes to indulge in. The Grote Markt (Grand Place) is where the tourist information desk is situated. Also in this central location is a 15th-century town hall with its iconic tall spires, across from which sits the late Gothic St. Peter's Church. The university lies just southeast of here, making it very easy for students to frequent the city center.

Whether explored on one's own or via guided tour, Leuven's historical landmarks and architecture are worth visiting. Most are located within the city's historical center. For those who enjoy art museums, Leuven is also home to the M-Museum, which exhibits a combination of modern art and work from the past centuries. Since the city is also known for its breweries, you may also want to experience the beer-drinking scene. Inbev’s main Belgian beer factory is located in Leuven, producing famous brands such as Stella Artois, Vieux Temps, and Leffe Radieuse. Depending on the day of the week there are also various markets, as well as seasonal markets like the Christmas Market where visitors can shop for Christmas gifts, taste local specialties, and drink a glass of Gluhwein or brandy. Various events and festivals are held year-round.

Most people think of Belgium food specialties and they think chocolate, waffles, and beer. Inventors of the chocolate bar and the praline, the Belgian chocolate industry indeed has produced some of the highest quality chocolate since the 17th century. Waffles are, of course, a common street snack and dessert, while beer is produced in a range of more than 1,000 varieties-each matched with a different food dish. Some meals even use beer as an ingredient, such as carbonade which consists of a stew of beef cooked in beer, similar to boeuf bourguignon. Fries are also extremely popular, as they most likely originated in Belgium. They are usually served with sauces, most often mayonnaise or ketchup. Other common dishes include moules-frites (mussels with fries), steak-frites (steak with fries), waterzooi (a rich stew of chicken or fish, vegetables, cream, and eggs), and boudin (a kind of sausage).

In Leuven most restaurants are tasty and affordable due to the student population. Muntstraat has a variety of options from traditional Belgian to international restaurants like Chinese, Mexican, or Italian. Other great waypoints for dining include Grand Place, Oude Markt (Old Market), and Parijsstraat.

The nearest major airport is Brussels Airport, which has international flights serving Europe, America, Africa, and Asia. A train and a bus station are located right at the airport with trains to Leuven running every half hour on weekdays and every hour on the weekend. Taxis are also available. It takes about 20 minutes by car and 13 minutes by train to reach Leuven from the airport.

Train and Bus Prices
The best prices for buses and trains in Belgium can be found on Omio (formerly GoEuro). They let you search across all train, bus, and plane routes throughout the region.