How much does it cost to travel to Brussels?

How much money will you need for your trip to Brussels? You should plan to spend around €97 ($108) per day on your vacation in Brussels, which is the average daily price based on the expenses of other visitors. Past travelers have spent, on average, €25 ($27) on meals for one day and €13 ($14) on local transportation. Also, the average hotel price in Brussels for a couple is €107 ($120). So, a trip to Brussels for two people for one week costs on average €1,356 ($1,512). All of these average travel prices have been collected from other travelers to help you plan your own travel budget.

A vacation to Brussels for one week usually costs around €678 for one person. So, a trip to Brussels for two people costs around €1,356 for one week. A trip for two weeks for two people costs €2,713 in Brussels. If you're traveling as a family of three or four people, the price person often goes down because kid's tickets are cheaper and hotel rooms can be shared. If you travel slower over a longer period of time then your daily budget will also go down. Two people traveling together for one month in Brussels can often have a lower daily budget per person than one person traveling alone for one week.


How expensive is Brussels?

How much does a trip to Brussels cost? Is Brussels expensive? The average Brussels trip cost is broken down by category here. All of these Brussels prices are calculated from the budgets of real travelers.

While meal prices in Brussels can vary, the average cost of food in Brussels is €25 per day. Based on the spending habits of previous travelers, when dining out an average meal in Brussels should cost around €10 per person. Breakfast prices are usually a little cheaper than lunch or dinner. The price of food in sit-down restaurants in Brussels is often higher than fast food prices or street food prices.

How much does it cost to go to Brussels? Naturally, it depends on the dates. We recommend SkyScanner because they can find the best deals across all of the airlines.


How much money do I need for Brussels?

How much do tours to Brussels cost? Multi-day tours can often be an effecient way to see the highlights of a country or region.

Find a hostel, guesthouse, or B&B in Brussels

Brussels On a Budget

Guildhalls in Grand Place, Brussels
Brussels is the capital of Belgium and also the sight of the headquarters of the European Union. Generally speaking, it's an expensive city that sees a good amount of travelers. It is also a highly political city that has an air of importance and power. It's an incredibly international city, with people from all over the world flocking to it due to its political, economical, and cultural significance.

Despite this, many travelers rush through, or even overlook Brussels. It has not yet made a major impact in the travel community, but that doesn't mean this city should be skipped. Despite its international feel, Brussels has a unique and personable atmosphere. It manages to hold on to its own unique culture and vibe. There's a deep routed history here, which can be seen not only in its architecture, but also the museums and art galleries that dot the city. As visitors can find many UNESCO World Heritage sites in Brussels, do yourself a favor and don't just rush in and out of this dynamic city. You can learn so much about the city itself, and Europe as a whole in just one visit.

Brussels' weather tends to be wet, with rain falling on an average of 200 days a year. This dampness means the city feels much colder than it actually is. Seasonal temperature changes are small, with summer temperatures rarely going above 22 degrees Celsius. After October the temperature drops and although snow is rare, it can still feel wet and cold.

Popular sights abound in the city and include the Grand Place-Grote Markt, Parc du Cinquantenaire-Jubelpar, Manneken Pis, Atomium, Basiliek van het Heilig Hart, and Cantillon Brewery. There are some interesting ways to see the city such as on a bike tour, doing an architectural tour, or taking the horse drawn carriage. This is definitely not necessary however, and many enjoy relaxing and visiting the sights on their own at their own pace. Brussels is an easy city to navigate, so if you don't feel compelled to do a tour, it is not a great loss.

Brussels is divided into 19 boroughs which are referred to as Communes or gemeenten. Bruxelles/Brussel is where you will find the most character and the highest concentration of attractions. Decorative buildings are found around Grand Place. Marolles/Marollen is near the middle of the city and it is still possible to hear people speaking Flemish here. There's a daily flea market on the Place du Jeu de Balle that is popular. Ixelles/Elsene is an energetic area with a lot of restaurants and bars. There is a lot of diversity in this area and some great ethnic restaurants. Molenbeek-Saint-Jean has a large Moroccan and Romani population and Saint-Gilles has French, Portuguese, Spanish, Maghrebi and Polish neighborhoods.

If you're interested in shopping, Brussels is a great city to pick up some fun souvenirs. The city is known for its lace which can be found at Grand Place-Grote Markt. Do make sure that you are actually buying locally produced lace as some places have outsourced the process. Chocolate is another Belgium favorite and you will find chocolate stores everywhere. It's something everyone should sample while they're in town. And of course, Belgium is known for its beer so make sure you allow yourself time to sit back, relax, and enjoy a glass in a good setting.

Food in Brussels is delicious. There are three main items that Brussels is known for. These include mussels, fries, and chocolate. Each should be tried at least once during your time here. Fries are served with unique toppings and there's debate over which place has the best version. Some recommended places include the fritkot near Barriere de Saint-Gilles, St-Josse's Martin, and Antoine.

Mid range restaurants are found in abundance around Rue des Bouchers-Beenhouwerstraat to the north of Grand Place. It is sometimes possible to negotiate a price before choosing a restaurant. Do be aware of hidden charges.

Vegan options are almost impossible to find, but there are some vegetarian restaurants that offer some good selections if you don't eat meat. It's also possible to get sandwiches that are strictly vegetarian.

Brussels Car Rental Prices
Compare prices across all major rental companies:
Most of Brussel's tourist attractions are close together and easily reached on foot. They're concentrated in the oldest part of town and walking is a pleasant way to explore. If you want to go to more outer regions, there is a good public transportation system that includes buses, trams, and metros. There are six metro lines and announcements are made in Dutch, French and English. It's also possible to rent a bike through a bike sharing program called Villo. There are more than 200 bike stations around the city and you can take a bike from one station and return it to another. There are daily and weekly memberships available.

Train and Bus Prices
The best prices for buses and trains in Belgium can be found on Omio (formerly GoEuro). They let you search across all train, bus, and plane routes throughout Europe. 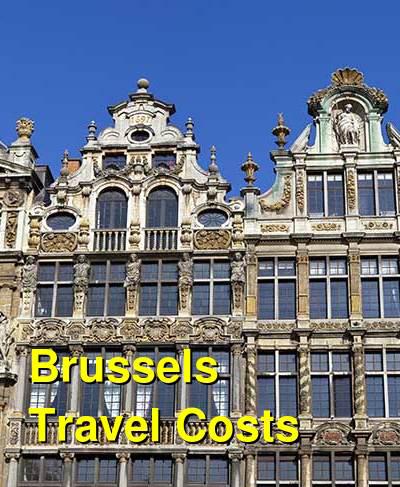 Rent a Bike to Get Around Brussels

By backpackguru in Local Transportation
Beginning in 2009, Brussels began offering Villo rentals around town. You need a Smart card to rent one, but the first half hour of use is free. From that point on it's about .50 euros for every half hour. You do have to pay a small setup fee of about 1.50 euros. The bikes are of good quality and they're available at over 180 locations around the city. It's a great way to see the city and get out and about for a very reasonable price.