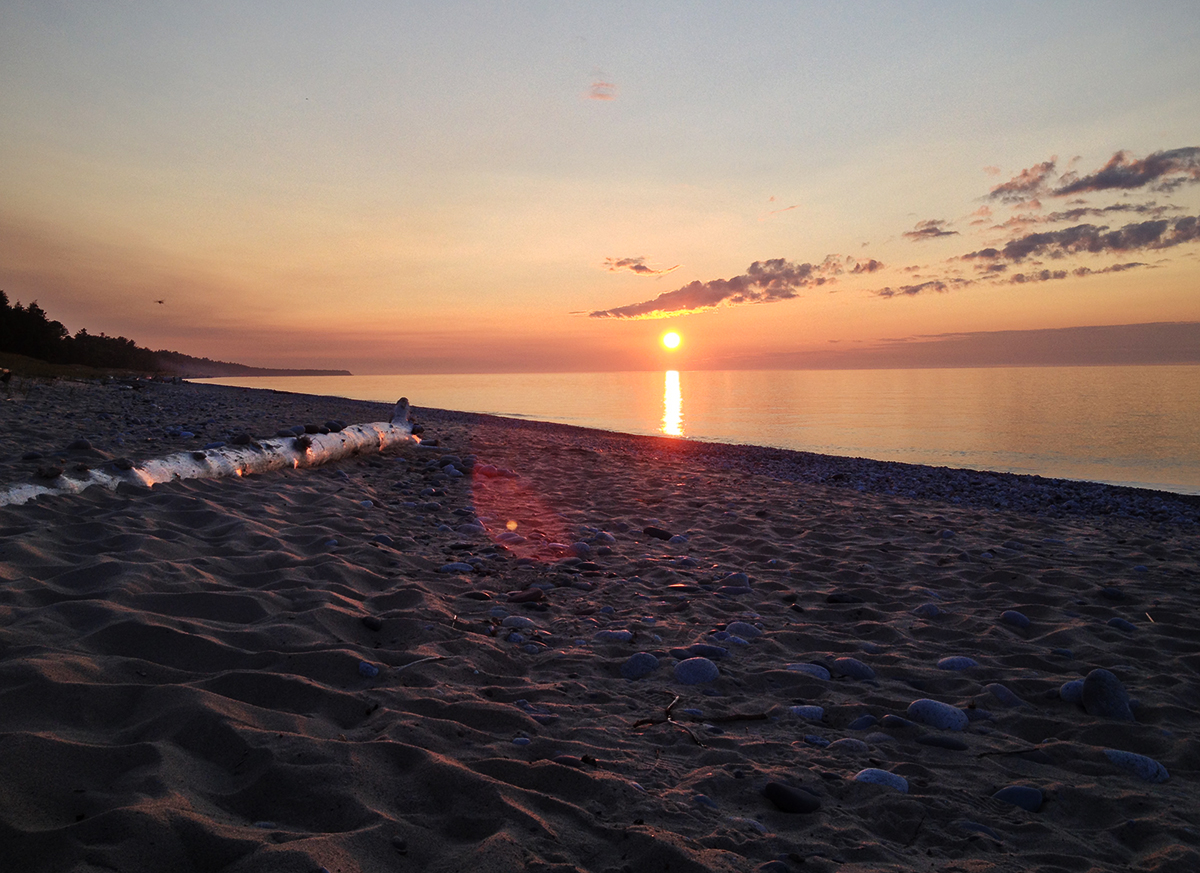 Read Part 1 of Life on the Road here.

Canada held a beautiful countryside.  The air was crisp and refreshing, and we stopped along our drive to admire odds and ends that we passed along the way—a stone railroad bridge, a sparkling creek, a quaint farm.  It was simple and charming, like out of a fairytale.  Though Canada shares a border with the United States, there was a definite change in the aura of the landscape.  I could feel a difference as we passed through.  And when we crossed back into the United States, camping along Lakes Michigan and Superior, I felt a different sense of nature here too—still beautiful, but different.

We continued our adventures into the Upper Peninsula of Michigan, stopping at Whitefish Point where the famous sinking of the SS Edmund Fitzgerald went down.   Looking out over Lake Superior, I found it easy to forget that this massive body of water was not an ocean.  We dawdled along the shore collecting bits of driftwood and colored pebbles, and soon were off again in search of lunch.

A woman at a nearby welcome center insisted that we stop at a place called The Berry Patch and try their famous pies.  It was a small mom-and-pop kind of place and we figured it would be good enough for lunch as well.  Sitting with our menus in a back corner, I could tell the place was full of locals who knew what they wanted the moment they walked in.  The menu had your run-of-the-mill diner fare and comfort food—sandwiches, burgers, pancakes, omelets, eggs and sausage…

“Hash browns?!  No.  This can’t be.” Patrick looked up at us in disbelief.

Shane and I exchanged looks for a moment and then lost it.  Our German friend thought that The Berry Patch was serving up hash brownies.  We explained to him between our hysterics that hash browns were a potato kind of side and that he would probably like them very much.  At this point, Patrick was averaging a whole bag of potato chips a day, and from Shane’s stories, I learned that Patrick was also known to order French fries and mashed potatoes for his two sides.  Anything potato was an instant favorite with Patrick.

The food ended up being mediocre and we never tried the pie.

As we left, Patrick started going on about this tourist trap Mystery Spot that the waitress had told him about, but we decided our next destination would be a cranberry farm on the brochure he had picked up.  And so we drove, and drove, and drove, came to the place where we thought it should be, couldn’t find it, and kept on driving.  We were on the Upper Peninsula of Michigan, right along Lake Superior, on a rugged country road, when I realized my phone service had changed.

“Ummm…are we in Canada again?”  Somehow my service was no longer AT&T, so we must have been far enough along the coast of the UP to have started picking up Canadian cell service.  At that point we accepted that there was no cranberry farm.  We had reached a place so far out that swarms of mosquitos surrounded the car.  Patrick and I swatted at the dozen or so that had made their way in through the windows before we closed them, while Shane maneuvered the car around on the rugged, narrow lane.

“We should have gone to the Mystery Spot.”  Patrick grumbled in the back.

“Shut up, Patrick!” said Shane from the front.

Patrick never got to see the Mystery Spot and we continued on our way.

The final gem of the Great Lakes region was definitely Oswald’s Bear Ranch.  After a two-mile hike to see Tahquamenon Falls, we hopped back in the car to find a sign that read “Bear Farm 20 miles.”  We drove rather quickly and made it through the gates promptly at 4:45pm to be stopped by a cheerful old lady in the parking lot.

“But I’ve come all the way from Germany!” Patrick piped up in the back.

“Well you’ll just have to come back tomorrow.”

“But—“  Patrick tried to protest.

Disgruntled that the so called “German card” did not work, we turned the car around and resolved to set up camp somewhere in the area.  After some solid ice cream at a place called The Scoop while Patrick conversed in German with some Amish women, we began the search.  It took us a while, but after a head-rattling journey along some rigorous backwoods roads, we finally found a campground called Blind Sucker #2 on an overflow lake near Superior.   In the end, staying the extra night was totally worth it.  We got a chance to experience some true UP wilderness and witnessed the sunset over Superior’s glittering waters…

I close my eyes and let the sun spread its warmth on my skin, but the air that is carried on the wind brushes my cheek with cool fingers.  The touch is light, but crisp and vivid.  I look out to Lake Superior.  I feel the ice at its center carried on the wind though it is midsummer.  The sand, too, is cooling as the sun sinks below the horizon.  Its last light glimmers in a warm glow upon the lake.  As it falls, I dig my toes into the sand, clinging to the last dregs of warmth.  The sun is a sliver of rose.  I realize I am holding my breath, and inhale sharply to a lungful of cold.  The sun takes its final plunge, and I long to follow its radiant path to a world below the lake, an escape from the approaching cold that is night.

–sunset on Superior, near Blind Sucker #2

In the morning, we returned to Oswald’s Bear Ranch.  We watched them snore and bumble around, threw apples to the larger ones, and got up close with a cub named Casper who had a liking for fruit loops.