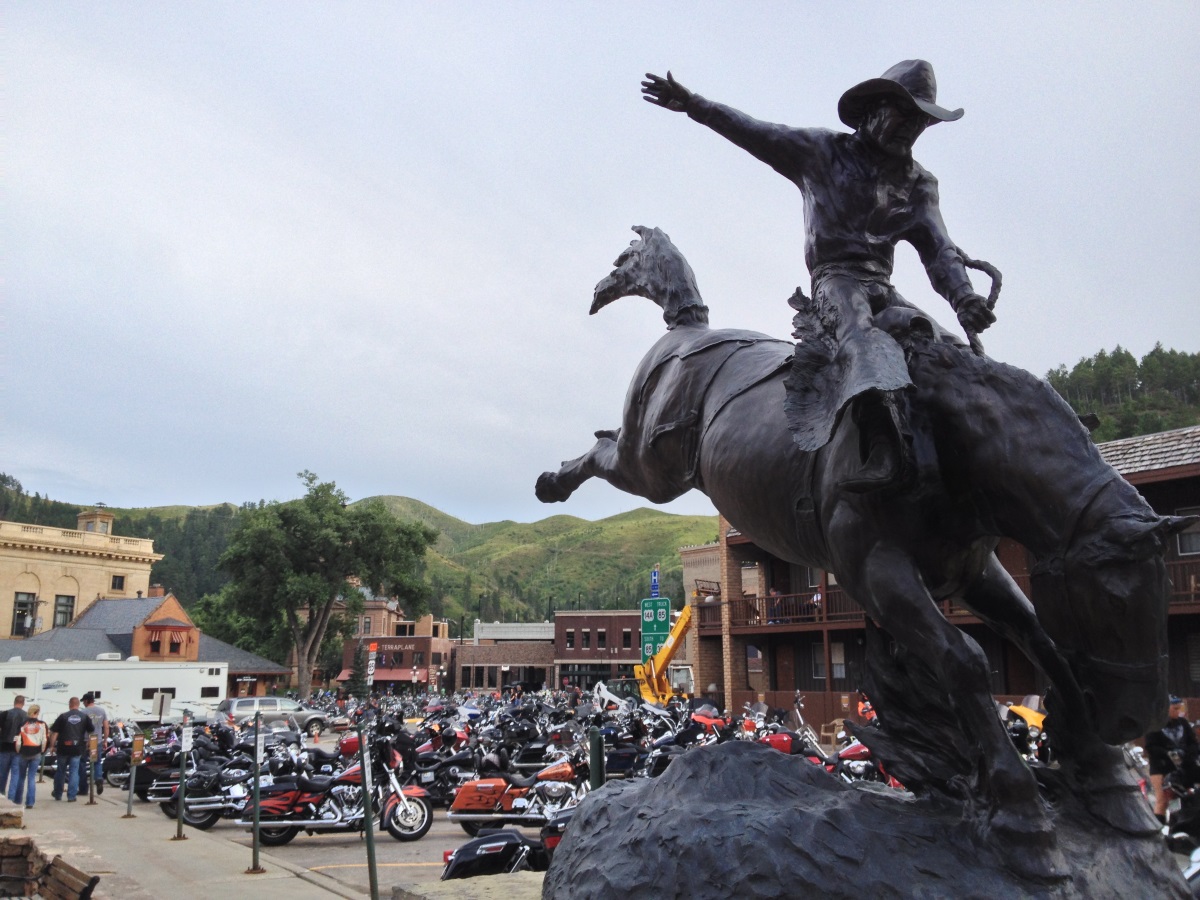 Part 4 of our Life on the Road series….

Our drive through the Great Plains became a blur of field and sky. This was the Great American frontier, vast and wild and free. I watched it fly by in waves as we made our way to the Black Hills of South Dakota. Now that we had two Germans in our crew, the car was filled with foreign yammering, Patrick and Helena chatting away in a mix of German and Sorbian. I let their voices fade into the background as the fields flew by outside…

Upon entering South Dakota, there is a noticeable difference in landscape. Since Michigan we have driven through Wisconsin and Minnesota, passing farms and towns and occasional cities—but South Dakota is a place of flatlands and rolling plains. Hay bales dot the fields as numerous as if they were herds of buffalo grazing in the sun. On those fields that stretch unplowed, a wind from the west weaves through the uncut grasses, moving the thin blades in rippling waves. Wheat berries fan out with the wind in soft feathers towards the east. They shine, sleek like silk, like the coat of a mustang moving over muscle as it canters against the roaring wind and over the plains. There is something entrancing in watching this movement. It is a sight you can feel, just by seeing—a field you long to lie in, you long to move with, to run through in great strides, wheat rustling against your jeans and wind lifting your spirits to the skies as open and rolling as the plains below.

We knew we were getting close to civilization again when we started to see motorcycles. One… Three… Twenty… When we counted the next stampede of 50 metallic stallions roaring through the plains, we knew something was up. And as it happened, we were coming into South Dakota on the same weekend that the big Sturgis Rally happens—when 400,000-500,000 bikers all come to Sturgis, South Dakota to complete one big ride together. As we drove into the first town, we knew we were outnumbered, and Patrick immediately added to his “must to-do” list—“Get in a fight with a biker.”

We found a campground called Wolf Camp at the base of the Iron Mountain, neighboring Mount Rushmore. The owners of the camp were also the proud owners of two wolves—Akia and Wakan Tanka. We could hear the wolves howling in the night and again in the early morning. It was eerie, but beautiful—a sad, longing sound that resonated with something deep inside, instilled fear but awe as well. Surrounded by wolves and bikers, it was an experience we never could have expected. But the bikers were genuinely friendly, just looking for comradery amongst everyone else there—and the wolves were just creatures of the earth singing their song to the wild.

The next day we saw Mount Rushmore the symbol of American patriotism, just minutes away from the Crazy Horse monument on another mountain. To think that these two symbolize conflicting pasts that few stop to think about really opened my eyes—the great progressive movements of colonizing America versus the purge of the Native Americans and the land they called home. It was something to think about as we traveled on to spend some time in the historic town of Deadwood, South Dakota.

Deadwood was your typical Wild West town—streets lined with bikers and motorcycles in place of cowboys and steeds. We spent a few good hours exploring shops, had some fun with old time photos, and grabbed a hearty bite to eat before visiting the graves of Wild Bill and Calamity Jane over in Mount Moriah Cemetery. We left a few tributes of our own amidst the memorials of pocket change, flowers, whiskey bottles, and cigarettes—and, in what he claimed to be an ode to the spirit of Wild Bill, Shane pocketed a few dollars from the grave in true bandit style.

It was getting late. The sun was setting upon the hills of the cemetery and will still did not know where we were spending the night. We wanted to make it to a KOA campsite at the base of Devils Tower in Wyoming, but it would be midnight before we reached it. After giving the campsite a call, they said we could set up tent whenever we got there and just pay in the morning.

We drove on, and it was indeed midnight by the time we reached Devils Tower. Made famous by the movie, Close Encounters of the Third Kind, Devils Tower has been a place of myth dating back to early Native American legends of the Lakota people. Its strange flat top and vertical ridges are truly something alien again the open plains, but coming in at night all we could see what a great black mass against a horizon of stars. It was entrancing, even in the dark, and we decided that we wanted to see the sun rise upon its ridges. After a few hours’ sleep we woke, we watched the line of red creep up, turning Devils Tower into a glowing jagged mound.

I watched it grow smaller as we packed up the car and drove further into Wyoming, a strange formation jutting starkly from the flatness of the plains. And then I realized that we weren’t stopped. We had packed up and left the campsite behind, just after some bikers, without paying a dime. It was then that we realized that in some places, if we did it right, we could camp for free.

And so we left the Great Plains, feeling like true runaway bandits of the Wild Wild West. Wild Shane, Alana Jane, and our getaway gang from Germany.