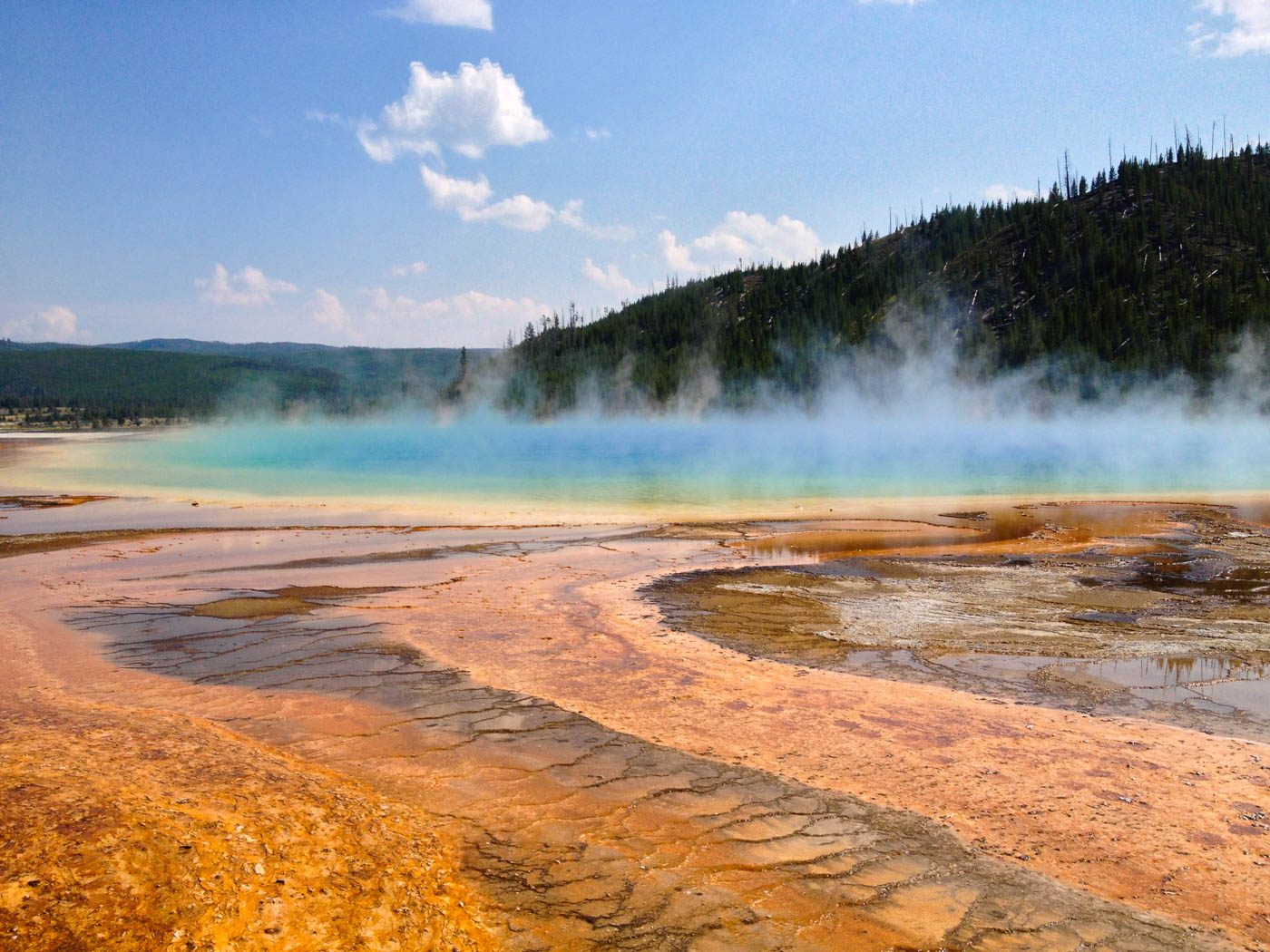 From Devils Tower we drove west across much of Wyoming, seeing nothing but fields. Fields, fields, fields, some hay bales, an endless stretch of road, and more fields. What I did not realize was that we were also rising, approaching small mountains on the horizon. It wasn’t until we were up on the mountain’s side that I realized how high we had risen. So high that we could see the line of haze where the atmosphere of the great big sky touched the vast green fields of earth below. This was a god’s point of view, and we could not help but stop for a few moments to take in the view.

But this was just the beginning. We were climbing into Bighorn National Forest, and after miles upon miles of fields, the unexpected canyons carved in bands like red agate were a sublime beauty to behold. We stopped the car again. And again. And again. Every turn led us from one striking view to the next through a landscape completely unforeseen, through mountainsides that filled the soul’s yearning for greatness in one glance. We were on our way to Yellowstone, but we discovered a treasure less known in the Bighorn Canyon.

Eventually, we made it back to civilization. Coming into the town of Cody, Wyoming, we were greeted by a banner that read: Come to the Cody Stampede Rodeo Every Evening at 8 pm! So we were sold. Why not? We headed over to the rodeo directly after a gunslinger reenactment, and had ourselves a night of true Wild West entertainment. As we settled into our seats, so did the sun for the day and the sky bloomed desert pink. To the east a rainbow emerged—I kid you not. You could not have asked for a more perfect evening. Needless to say, we were all pleased, especially the Germans who could not think of anything more American than a rodeo. Patrick pinned on his new old fashioned sheriff’s badge with a grin, and vowed that he would need to shop for a cowboy hat next.

But when the next day came, our destination was Yellowstone. We hung around in the morning to see the Buffalo Bill Center of the West (complete with five museums dedicated to the art and culture of Cody). It was a place we could have explored all day, but we itched to see the wilderness of the very first national park established in America. Unfortunately it was a dreary day. This, coupled with the obscene amount of people crowding the roads of the park put a bit of a damper on our first impression of Yellowstone. It did, however, raise interesting questions about the true wilderness of national parks. In creating a border and turning the place of nature into an attraction, are we actually interfering with its wildness? The wildlife of the place was, by far, the best experience that first day. To hear the low guttural groan of the bison roll across the plains vibrated with a primal state of being deep within. These were beautiful peaceful creatures from afar, but dangerous when provoked. Thus our wildlife education of Yellowstone began.

Upon entering the park, one of the first things we received was a bright yellow card advising visitors to keep a safe distance from the wildlife, illuminating the fact that people have been “gored” in the past by wild elk and buffalo. This was fair enough, but the real kicker came when we decided we wanted to try some back woods camping, an experience where you can hike to a campground and be closer to Yellowstone’s true wilderness. A stop at the park office was required for us to register and watch a Bear Safety video with scenarios acted out in true 90’s fashion. We all laughed it off, but it definitely left an impression. Fearful of attracting bears, we cooked up dinner before embarking on the hike, and by the time we set out it was close to dark. Flashlights in hand we marched on loudly (this would scare any bears away), and hoped desperately that we would be able to follow the markers in the dark. Seeing the flickering light campfire in the distance we called out into darkness… “Hello!”

A voice answered back, “Hi there!”

“We’re looking for campsite E3!” we echoed back over the abyss.

So we were on the right track, and after another fifteen minutes’ walk we found our spot. It was eerie being in the middle of nowhere in the dead of night. We knew there was a lake nearby but could not see it for a fog had crept over beneath the light of the moon. And the temperature was dropping. We set up camp as the night got colder and colder. It was August, but the day had been cool and damp, and the night soon became frigid to the bone. When we woke, we knew we were not going to spend another night here. Being out in the true wilderness was a refreshing experience that I would not take back, but it was just too damn cold.

As the day emerged, the sun turned the fog into a bright mist and we took the hike back to the beaten path of Yellowstone. We saw the hotspots that day: Old Faithful, Firehole Falls, the Lower Falls, the Grand Prismatic Spring, and others—and then we high-tailed it out of there in search of warmer weather. We were not going spend another night shivering. And so we drove straight through the night, all the way to Lake Tahoe.