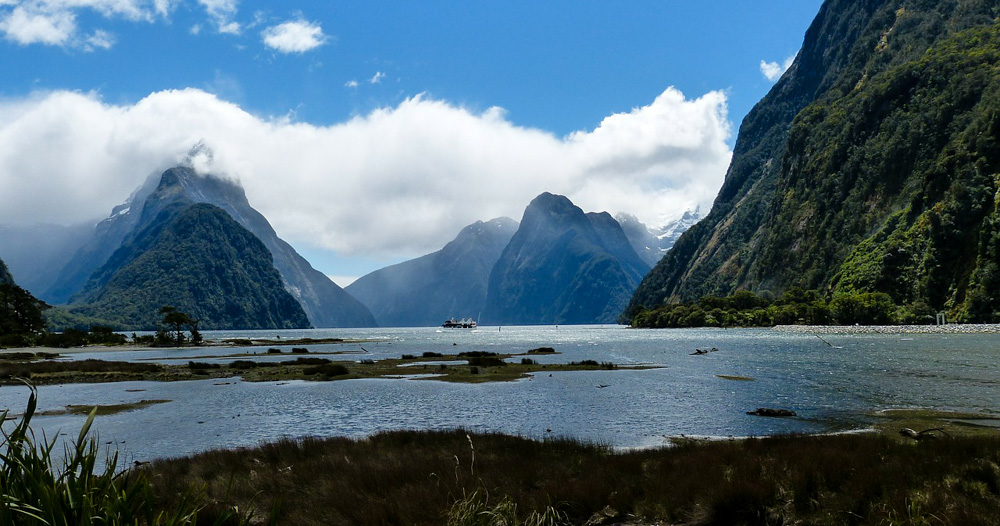 Truth be told, glow worms aren’t actually worms per say, rather they are bioluminescent flies (although I admit glow worms sounds a bit more exciting). However, as I sat in a small row boat in a pitch black grotto in Te Anau, New Zealand, these creatures look more like stars in the night sky than anything else, glittering constellations twinkling all around me.

Te Anau, part of the Fiordland region of New Zealand, is one of the best places on the country’s South Island to see glow worms. Only accessible by boat tour from Te Anau, the caves are located a short cruise from the town.

After setting off from the docks, the well-appointed boat cruised us out to the caves across Lake Te Anau, a large glacial lake. Large glass windows made for prime viewing of the fiords as we travelled, and indoor, heated viewing areas kept us dry. (Note: to say it rains often in Te Anau would be a massive understatement- bring along your raincoat and waterproof trousers.)

Arriving at the caverns, we disembarked (quickly, because it was pouring) and hurried into the welcome centre where we a friendly guide told us a bit about the glow worms and the caves. The glow worms that inhabit caves such as these throughout New Zealand are a type of fungus gnat, or small fly. The larvae of these species use bioluminescence (the production and emission of light by a living organism), to catch prey- they attach a glow to the end of a sticky thread, which they hang throughout their turf within the cave. The prey mistakes the glow for the night sky and flies toward it, thinking it is the night sky and they can escape from the cave. Instead, they are snared and become a snack for a growing larvae- nature never ceases to amaze me. These fungal gnats prefer dark, moist places, so the caves of Te Anau make a perfect home for them.

We then set out into the caves, which have been carved through the limestone rocks by running water over thousands of years. An eerie feeling sets in, as you enter the caves in darkness, hearing only running water and seeing nothing. This quickly subsided as my eyes grew accustomed to the darkness, and I gained my bearing in this subterranean world.

Tiered waterfalls formed by rushing water, high cathedral ceilings and passages so small I had to walk on my knees were all part of the experience, and soon we reached a very small boat. Despite my doubts that our group of 12 would all fit, we all clambered into a rickety row boat and our guide paddled in silence through the grotto (apparently, glow worms don’t like noise).

See Also  Coronavirus: I've Got A Holiday Booked, What Are My Options? (For UK residents)

What happened next literally left me at a loss for words, and when it was all said and done I found myself with a stiff neck, the result of spending 15 minutes looking straight up at the grotto’s ceiling. The pitch black of the grotto was illuminated by thousands and thousands of bright glowing lights, each one a tiny larvae. I spent the serene and silent boat ride darting my eyes to and fro, examining each grouping of glowing lights, and could see clearly why the insects were fooled- the resemblance to the night sky’s constellations was unlike anything I’ve ever seen. This beautiful spectacle provides a sight unlike anything else, and it’s easy to forget that gnats, generally considered by humans to be a pest and a nuisance, could create something like this.

Sir Winston Churchill famously proclaimed, “We are all worms, but I do believe that I am a glow worm.”

If I had to be a worm, the glow worms of Lake Te Anau’s cavernous grottos would certainly be hard to beat.

Fiordland has an average of over 200 rainy days per year, so be prepared. Even in summer, the weather can be blustery and cold. Te Anau is the jumping off point for day trips to Milford Sound, itself a bucket list item in its own right- Real Journeys offer discounts for booking multiple tours, so enquire at the Visitor Centre if you are planning to spend the day at Milford or Doubtful Sound while you are in the area.

Glow worms are very sensitive to light, so flash photography is not allowed within the caves. However, postcards and other images are for sale in the welcome centre.

Katie Dundas is a travel writer and American expat, currently based in Sydney, Australia. Travel and writing are her passions, and she has traveled extensively through Europe, Oceania, and Asia, and can always be found planning her next trip! When not traveling she enjoys running, sketching, and reading. For more on her travels, visit  TheAccidentalAustralian.com