How much does it cost to travel to Phnom Penh?

How much money will you need for your trip to Phnom Penh? You should plan to spend around ៛131,629 ($32) per day on your vacation in Phnom Penh, which is the average daily price based on the expenses of other visitors. Past travelers have spent, on average, ៛41,565 ($10) on meals for one day and ៛25,397 ($6.15) on local transportation. Also, the average hotel price in Phnom Penh for a couple is ៛79,896 ($19). So, a trip to Phnom Penh for two people for one week costs on average ៛1,842,802 ($446). All of these average travel prices have been collected from other travelers to help you plan your own travel budget.

A vacation to Phnom Penh for one week usually costs around ៛921,401 for one person. So, a trip to Phnom Penh for two people costs around ៛1,842,802 for one week. A trip for two weeks for two people costs ៛3,685,604 in Phnom Penh. If you're traveling as a family of three or four people, the price person often goes down because kid's tickets are cheaper and hotel rooms can be shared. If you travel slower over a longer period of time then your daily budget will also go down. Two people traveling together for one month in Phnom Penh can often have a lower daily budget per person than one person traveling alone for one week.


How expensive is Phnom Penh? How much money do I need for Phnom Penh?

How much does a trip to Phnom Penh cost? Is Phnom Penh expensive? The average Phnom Penh trip cost is broken down by category here. All of these Phnom Penh prices are calculated from the budgets of real travelers.

Looking for a hotel in Phnom Penh? Prices vary by location, date, season, and the level of luxury. See below for options.

How much does it cost to go to Phnom Penh? Naturally, it depends on the dates. We recommend Kayak because they can find the best deals across all airlines.

The price of renting a car in Phnom Penh will depends on dates, the type of car, the location, and your age. We recommend Kayak because they can find the best deals across all car rental companies.

What did other people spend on Food in Phnom Penh?

Typical prices for Food in Phnom Penh are listed below. These actual costs are from real travelers and can give you an idea of the prices in Phnom Penh, but your costs will vary based on your travel style.

Phnom Penh On a Budget 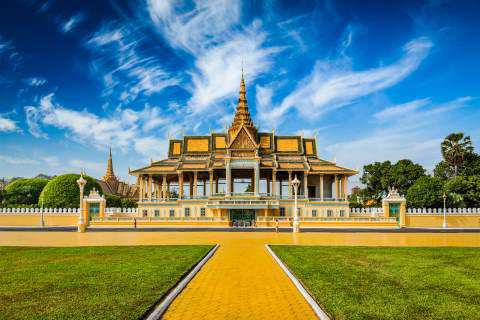 Phnom Penh Royal Palace, Cambodia
Phnom Penh is the capital and largest city in the country of Cambodia. It is located at the edge of the Mekong and the Tonle Sap rivers and is the nation's center of economics and industry. The metropolitan area has a population of about 2.2 million.

Phnom Penh was once called the "Pearl of Asia." In the 1920s it was one of the most impressive French built cities in the region and was an important tourist destination. During the Vietnam War, refugees fled to the city and by 1975 the city's population was between 2 and 3 million, most of them being refugees. The city fell to the Khmer Rouge in 1975 and they cut off supplies to the population for over a year. Journalists reported torture and mutilation of the trapped civilians and the Khmer Rouge forcibly evacuated the city in what is known as the death march. The Khmer Rouge was driven from the city by the Vietnamese in 1979 and reconstruction began.

Today, tourism continues to grow in the city and those who visit are greeted by a welcoming and friendly population, a rich culture, and truly rewarding travel experience.

Phnom Penh has a tropical wet and dry climate. It is hot year around with very little temperature variation. Lows are usually in the low 70s Fahrenheit and highs are in the mid to high 90s Fahrenheit. The southwest monsoon brings rains between May and October and the northeast monsoon brings the dry season from November to March.

There are a good number of sights spread throughout town. In the riverfront area, known as Sisowath Quay, you will find many of the nicer buildings and more sculpted lawns. This area is also where you'll find the Tuol Sleng Genocide Museum, which offers a thorough overview of the country's horrific past. There is also the Royal Palace, the National Museum of Cambodia, Wat Phnom, and Wat Botum, among many other interesting sights.

Wat Phnom is at the top of a hill in the north of of the city. This temple is still visited by worshipping locals and tourists who make the climb. The French Quarter is to the east of Wat Phnom. This area has the city's most impressive colonial architecture. The area also has Boeng Kak Lake, the Royal School of Fine Arts, and Hotel Le Royal.

The city's central market is Psah Thmai. It's a great place to shop.

In the east there is the Tonle Sap river, along which there are many restaurants and bars. The two kilometer strip begins at the Royal Palace and Siver Pagoda and ends to the east of Wat Phnom. On the other side of the river is Prek Leap. This area can be reached by the Cambodian-Japanese Friendship Bridge.

On the southern side of town you'll find the grand Hotel Cambodiana Phnom Penh and the Independence Monument.

The Toul Sleng Genocide Museum is in the western part of town.

Activities in Phnom Penh include cooking classes, bike tours, river cruises, and massages. If you're interested in doing some shopping, there are some great markets around town that offer everything from the essentials, like sunglasses, to local handicrafts, which make great souvenirs. Some of the better markets in town include the Central Market, Sorya Mall, City Mall, Russian Market, and Olympic Market.

Phnom Penh has an excellent selection of food options, most of which are quite cheap. There is a surprising diversity of international choices available with everything from French, Thai, and Vietnamese represented. Of course, Cambodian food is available everywhere as well. Cambodian food is quite delicious, and is comparable to Thai food, although much less spicy. Many of the sauces are coconut based and are served over either fish or chicken. In the riverfront area you'll find most of the restaurants that cater to tourists, and are therefore the most diverse, but also the most expensive.

Cambodia is also well known for its exotic street food. If you're the adventurous type, you can try anything from duck embryo eggs to frogs, or grilled pig's ears, among many other things. It's probably best not to make a meal of the local specialties, but they can make for an interesting snack option.

Many of the city's hotels are near the river, and it is possible to explore most neighborhoods on foot. There is also no shortage of motorbikes, taxis, or tuk tuks that can take you around. Do negotiate a fair price before committing to the ride.