A Travel Price Comparison for Families, Couples, and Backpackers Asuncion vs. Huaraz for Vacations, Tours, and Honeymoons

Should you visit Asuncion or Huaraz?

If you're trying to decide where to visit between Asuncion or Huaraz, this travel comparison, which includes costs, can help. The overall cost of travel is usually a consideration when deciding where to go next, and the cost comparison down below can help you decide based on the average prices from other travelers along with your own travel budget.

Where Should I go: Asuncion or Huaraz?

Huaraz is a large town in the Cordillera Blanca region of Peru's Central Sierra. Huaraz stands tall at 3100m; travellers from Lima might need a day or two to acclimatize to the change in atmosphere. Nearly wiped out by the earthquake of 1970, the town of 100,000 blends a mix of modern and native culture. Huarez is first and foremost a trekking metropolis. During high season the streets buzz with hundreds of backpackers and adventurers freshly returned from arduous hikes or planning their next expedition. The town has many markets, shops, quality restaurants and hopping bars catering to tourist and local needs. Mountain adventures in the off-season can be equally rewarding, but the vibe is calmer and some places go into hibernation once the rains set in.

Which city is cheaper, Huaraz or Asuncion?

The average daily cost (per person) in Asuncion is $57, while the average daily cost in Huaraz is $38. These costs include accommodation (assuming double occupancy, so the traveler is sharing the room), food, transportation, and entertainment. While every person is different, these costs are an average of past travelers in each city. What follows is a categorical breakdown of travel costs for Asuncion and Huaraz in more detail.

Compare Hotels in Asuncion and Huaraz

Looking for a hotel in Asuncion or Huaraz? Prices vary by location, date, season, and the level of luxury. See below for options and compare which is best for your budget and travel style.

Some typical examples of transportation costs in Huaraz are as follows:

Is it cheaper to fly into Asuncion or Huaraz?

Prices for flights to both Huaraz and Asuncion change regularly based on dates and travel demand. We suggest you find the best prices for your next trip on Kayak, because you can compare the cost of flights across multiple airlines for your prefered dates.

Below are a few samples from actual travelers for food and meal costs in Huaraz:

Here are a few typical costs in Huaraz for activities, ticket prices, and tours that come from previous visitors:

Tours and Activities in Huaraz

Here are a few actual costs in Huaraz for available activities, ticket prices, and tours:

When we compare the travel costs of actual travelers between Asuncion and Huaraz, we can see that Asuncion is more expensive. And not only is Huaraz much less expensive, but it is actually a significantly cheaper destination. So, traveling to Huaraz would let you spend less money overall. Or, you could decide to spend more money in Huaraz and be able to afford a more luxurious travel style by staying in nicer hotels, eating at more expensive restaurants, taking tours, and experiencing more activities. The same level of travel in Asuncion would naturally cost you much more money, so you would probably want to keep your budget a little tighter in Asuncion than you might in Huaraz.


When is the best time to visit Asuncion or Huaraz?

Asuncion has a temperate climate with four distinct seasons, but Huaraz experiences a tropical climate with fairly warm weather most of the year.

Should I visit Asuncion or Huaraz in the Summer?

Both Huaraz and Asuncion during the summer are popular places to visit. The warm tropical climate attracts visitors to Huaraz throughout the year.

The weather in Huaraz can be very cold. Asuncion is much warmer than Huaraz in the summer. The temperature in Asuncion is usually 29°C (84°F) in January, and Huaraz stays around 3°C (37°F)in July.

Should I visit Asuncion or Huaraz in the Autumn?

The autumn attracts plenty of travelers to both Asuncion and Huaraz. Plenty of visitors come to Huaraz because of the warm tropical climate that lasts throughout the year.

It's quite cold in Huaraz in the autumn. In the autumn, Asuncion is much warmer than Huaraz. Typically, the autumn temperatures in Asuncion in April are around 24°C (75°F), and Huaraz is about 4°C (39°F)in October.

Should I visit Asuncion or Huaraz in the Winter?

The winter brings many poeple to Asuncion as well as Huaraz. Huaraz attracts visitors year-round for its warm weather and tropical climate.

In July, Asuncion is generally much warmer than Huarazin January. Temperatures in Asuncion average around 19°C (66°F), and Huaraz stays around 7°C (45°F).

It's quite rainy in Huaraz. Asuncion usually gets less rain in July than Huarazin January. Asuncion gets 30 mm (1.2 in) of rain, while Huaraz receives 122 mm (4.8 in) of rain this time of the year.

Should I visit Asuncion or Huaraz in the Spring?

Both Huaraz and Asuncion are popular destinations to visit in the spring with plenty of activities. The warm tropical climate attracts visitors to Huaraz throughout the year.

Asuncion is much warmer than Huaraz in the spring. The temperature in Asuncion is usually 25°C (77°F) in October, and Huaraz stays around 6°C (43°F)in April.

It's quite rainy in Asuncion. In October, Asuncion usually receives more rain than Huarazin April. At this time of the year, Asuncion gets 130 mm (5.1 in) of rain, while Huaraz receives 93 mm (3.7 in) of rain.

Typical Weather for Huaraz and Asuncion 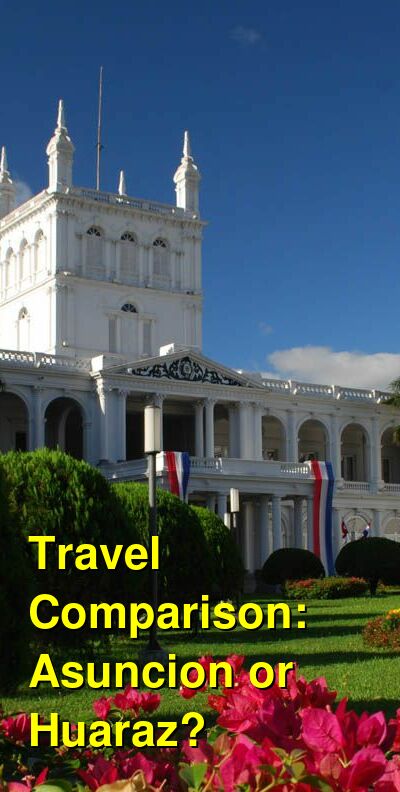