A Travel Price Comparison for Families, Couples, and Backpackers Athens vs. Shanghai for Vacations, Tours, and Honeymoons

Should you visit Athens or Shanghai?

Which city should you visit? Read on to compare the prices of travel for Athens and Shanghai. We’ll break down costs for accommodation, food, transportation and more to help you learn more about these two destinations. Then, you can figure out if either of these two places are accessible based on your travel budget. So, let's dig into it.

Shanghai is the largest and most modern city in China. With a population of over 23 million, it is the economic and financial hub of the country. It also continues to be one of the fastest growing cities in China with regular changes to the city's layout and skyline. It is not uncommon for buildings to be torn down, rebuilt and then torn down and rebuilt again. The city also has skyscrapers that rank among the tallest in the world. It has an ever changing downtown and street scape. In Shanghai, the general mantra remains "out with the old, in with the new".

Which city is cheaper, Shanghai or Athens?

The average daily cost (per person) in Athens is €103, while the average daily cost in Shanghai is €89. These costs include accommodation (assuming double occupancy, so the traveler is sharing the room), food, transportation, and entertainment. While every person is different, these costs are an average of past travelers in each city. Below is a breakdown of travel costs for Athens and Shanghai in more detail.

Accommodation prices vary by location and style, but travelers pay on average about €126 for a double occupancy room in Shanghai.

The average traveler spends about €17 per day in Shanghai for food, but obviously this is dependent on the type of restaurant and the amount of food ordered. To save money you can grab a lighter lunch or dinner, or you can try fast food or street food.

Some typical examples of dining costs in Shanghai are as follows:

Also, here are some specific examples of food and dining related activities in Shanghai.

Below are a few samples from actual travelers for transportation costs in Shanghai:

Hired Cars and Shuttles in Shanghai

Some specific examples of transportation prices in Shanghai:

Is it cheaper to fly into Athens or Shanghai?

Prices for flights to both Shanghai and Athens change regularly based on dates and travel demand. We suggest you find the best prices for your next trip on Kayak, because you can compare the cost of flights across multiple airlines for your prefered dates.

Shanghai's costs for entertainment, tickets, attractions, and tours will often cost around €6.55 per person, per day. This cost can vary widely by the type of activity, however, as this includes admission tickets, day tours, museums, and other things to do.

Some typical examples of activities, tours, and entrance ticket prices in Shanghai are as follows:

Tours and Activities in Shanghai

Some specific costs of activities, tours, and entrance tickets for Shanghai are as follows:

The average person spends about €5.71 on alcoholic beverages in Shanghai per day. The more you spend on alcohol, the more fun you might be having despite your higher budget.

Sample the Local Flavors in Shanghai

Also in Shanghai, these are the prices for nightlife and alcohol related activities from various tour providers:

When comparing the travel costs between Athens and Shanghai, we can see that Athens is more expensive. However, the two cities are actually relatively comparable in price, as the difference is somewhat minimal. Generally, this means that you could travel with generally the same travel style and level of luxury in each place. Even though Athens is in Europe and Shanghai is in Asia, both of these destinations have relatively similar prices of travel. Generally, the levels of luxury and expenses are the same for these cities even though they are geographically far apart. 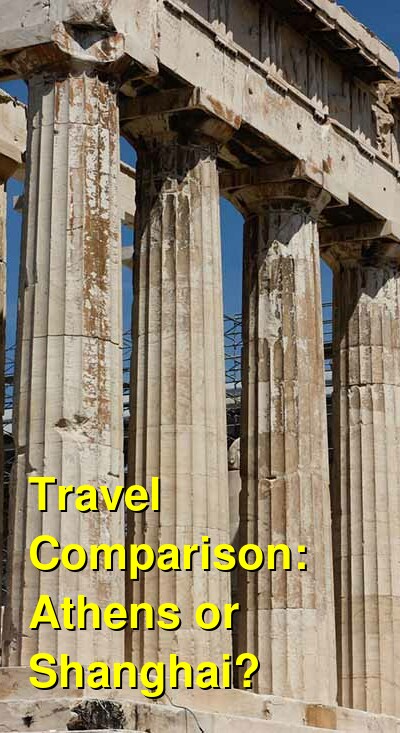