How much does it cost to travel to Chongqing?

How much money will you need for your trip to Chongqing? You should plan to spend around ¥499 ($77) per day on your vacation in Chongqing, which is the average daily price based on the expenses of other visitors. Past travelers have spent, on average, ¥142 ($22) on meals for one day and ¥107 ($17) on local transportation. Also, the average hotel price in Chongqing for a couple is ¥569 ($88). So, a trip to Chongqing for two people for one week costs on average ¥6,990 ($1,078). All of these average travel prices have been collected from other travelers to help you plan your own travel budget.

A vacation to Chongqing for one week usually costs around ¥3,495 for one person. So, a trip to Chongqing for two people costs around ¥6,990 for one week. A trip for two weeks for two people costs ¥13,980 in Chongqing. If you're traveling as a family of three or four people, the price person often goes down because kid's tickets are cheaper and hotel rooms can be shared. If you travel slower over a longer period of time then your daily budget will also go down. Two people traveling together for one month in Chongqing can often have a lower daily budget per person than one person traveling alone for one week.


How expensive is Chongqing? How much money do I need for Chongqing?

How much does a trip to Chongqing cost? Is Chongqing expensive? The average Chongqing trip cost is broken down by category here. All of these Chongqing prices are calculated from the budgets of real travelers.

Find a hostel, guesthouse, or B&B in Chongqing

How much does it cost to go to Chongqing? Naturally, it depends on the dates. We recommend SkyScanner because they can find the best deals across all airlines.

The price of renting a car in Chongqing will depends on dates, the type of car, the location, and your age. We recommend SkyScanner because they can find the best deals across all car rental companies.

Chongqing On a Budget

Chongqing, China
Chongqing, China is a large city in central China and one of only four cities in the country that are not part of a province. While Chongqing is famous for being an economically important city, brush away its industrial surface and you'll find a naturally beautiful city with plenty of hidden wonders. Although you'll find many expats in the city, English is rarely spoken, meaning knowing some basic Mandarin will come in handy.

Chongqing is notorious for their hot and humid weather in the summers, with temperatures reaching up to 90 degrees Fahrenheit in July and August. The rest of the year sees fairly mild weather with temperatures staying between 50 and 75 degrees from autumn to spring. Chongqing does have a bad smog problem, especially in summer and winter, and is listed as one of the top ten most air-polluted cities in the world.

While the city may look industrial, you'll find it has a lovely character well worth exploring. Head to HongYaDong to see a recreation of old Chongqing that is built alongside a mountain. Here, you'll find some small shops and great spots to take in the views of the city. At Jiang Jieshi, you'll find the old military headquarters from when the city was the capital of China in WWII. Due to it being all the way up in the Nanshan Mountains above the city, the headquarters were left untouched by enemy forces and are very well preserved. Enjoy a walk along Ciqikou, meaning porcelain port, on the Jialing River where porcelain has been made and transported around the world for centuries. There are a number shops, well preserved buildings, a boat restaurant, and an original temple at the top of the hill.

Chongqing is quite a large city, with 26 districts, most of which are either residential or industrial and therefore of little interest to tourists. The major districts of interest are:

Yuzhong District, which is the central district of Chongqing and the primary political, economic, and entertainment part of the city.

Nan'an District, a historically important district that is full of natural and historical wonders. Here, you'll find Nanshan Mountain and the Ciyun Temple.

Shapingba District, one of the main education districts in the city and home to the Ciqikou and monuments from the Anti-Japanese War.

Jiangjin District, which dates back over 1500 years and is famous for the beautiful Simian Mountain that features lakes, forests, and waterfalls.

Relax and take in the sights of Chongqing from a river cruise along the Yangtze River. There's also a nighttime tour boat that will take you along both the Jialing and Yangtze Rivers where you can enjoy the stunning skyline all lit up at night. If you prefer to be out of the water, you can take a cable car ride over the Yangtze River to get a stunning view of the city.

Chongqing is renowned for their hot springs, with a number of options ranging from large complexes with spa treatments to community based smaller ones. Tour buses are available to take you around to the major hot spring locations like Northern Hot Springs Park and Tianci Hot Springs.

Chongqing is a harbor city and loves to include freshly caught seafood in their dishes. Hot pot is also a popular option here, with hot pot restaurants galore. You can find everything from the traditional spicy hot pots to ones that have no spice and are essentially just bone broth. If you're looking to dine with a view, head to the Nanbin Lu area where you'll get great views of the Yangtze River and city skyline.

Bars in Chongqing are plentiful, ranging from clubs to sports bars and pubs. You'll find beer is the most popular drink, although be sure to ask for it from the tap and not the slop tray! For men, be careful of the girls sent over to entertain you, as you'll often leave the bar expected to pay large sums for their company.

Chongqing has their own international airport as well as three large train stations and a long distance bus depot. Due to the maze like landscape of the city, walking is ill advised to tourists as getting lost is very easy. The subway, monorail, and bus systems are fairly easy to navigate to help you get around. Taxis are hard to find in the summers and tend to be expensive. Drivers rarely speak anything but Mandarin, so its best to have the address written down in Mandarin so that you end up in the right place. 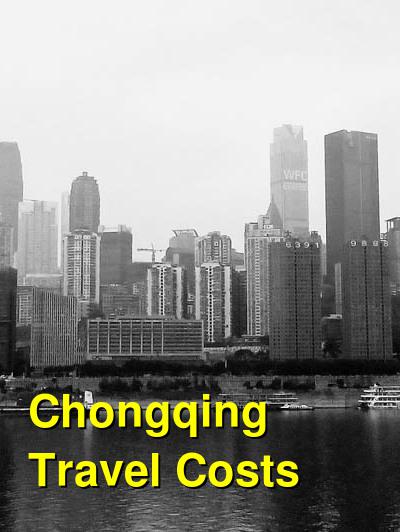