A Travel Price Comparison for Australia Darwin vs. Melbourne for Vacations, Tours, and Honeymoons

Should you visit Darwin or Melbourne?

If you're trying to decide where to visit between Darwin or Melbourne, this travel comparison, which includes costs, can help. The overall cost of travel is usually a consideration when deciding where to go next, and the cost comparison down below can help you decide based on the average prices from other travelers along with your own travel budget.

Where Should I go: Darwin or Melbourne?

Darwin is a tropical city set against the Timor Sea in north central Australia. It is also the capital city of the Northern Territory. Despite being a relatively small city, Darwin is very diverse with residents from all over the world. The city itself has a very relaxed vibe with plenty to do. Visitors can enjoy everything from traditionally Asian style markets to culturally diverse events such as concerts, festivals or art shows.

Melbourne is the second largest city in Australia, after Sydney. It is also the capital city of the state of Victoria, in southeastern Australia. Melbourne is arguably the best city to experience culture and the arts in Australia. There is a friendly rivalry between Melbourne and Sydney over livability and popularity and Melbourne is definitely the city to visit for its parks, shopping, restaurants, galleries and theaters. Like Sydney, it is situated on the water, at the head of Port Phillip Bay. It's a beautiful city, and although it lacks the major sights that you'll find in Sydney such as the Sydney Opera House or the Harbour Bridge, you will never find yourself lacking for entertainment. It is also a wonderful base for exploring many of the nearby highlights, including Grampians National Park, The Great Ocean Road, and Phillip Island where you can view the penguin parade.

Which city is cheaper, Melbourne or Darwin?

The average daily cost (per person) in Darwin is $97, while the average daily cost in Melbourne is $156. These costs include accommodation (assuming double occupancy, so the traveler is sharing the room), food, transportation, and entertainment. While every person is different, these costs are an average of past travelers in each city. What follows is a categorical breakdown of travel costs for Darwin and Melbourne in more detail.

Compare Hotels in Darwin and Melbourne

Looking for a hotel in Darwin or Melbourne? Prices vary by location, date, season, and the level of luxury. See below for options and compare which is best for your budget and travel style.

Below are a few samples from actual travelers for transportation costs in Darwin:

Hired Cars and Shuttles in Darwin

Some specific examples of transportation prices in Darwin:

Below are a few samples from actual travelers for transportation costs in Melbourne:

Hired Cars and Shuttles in Melbourne

Also for Melbourne, here are a few examples of actual transportation services:

Is it cheaper to fly into Darwin or Melbourne?

Prices for flights to both Melbourne and Darwin change regularly based on dates and travel demand. We suggest you find the best prices for your next trip on Kayak, because you can compare the cost of flights across multiple airlines for your prefered dates.

For Melbourne, here are some examples of average food and meal prices for travelers:

For Melbourne, here are some samples of tours and activities related to meals and dining experiences:

Tours and Activities in Darwin

Some specific costs of activities, tours, and entrance tickets for Darwin are as follows:

Tours and Activities in Melbourne

For Melbourne, here are a few prices for actual activities, tours, and tickets provided by various companies:

Here are a few samples of the prices for alcohol and nightlife in Darwin from other travelers:

Sample the Local Flavors in Darwin

Also in Darwin, these are the prices for nightlife and alcohol related activities from various tour providers:

Here are a few samples of the prices for alcohol and nightlife in Melbourne from other travelers:

Sample the Local Flavors in Melbourne

Also in Melbourne, these are the prices for nightlife and alcohol related activities from various tour providers:

When we compare the travel costs of actual travelers between Darwin and Melbourne, we can see that Melbourne is more expensive. And not only is Darwin much less expensive, but it is actually a significantly cheaper destination. So, traveling to Darwin would let you spend less money overall. Or, you could decide to spend more money in Darwin and be able to afford a more luxurious travel style by staying in nicer hotels, eating at more expensive restaurants, taking tours, and experiencing more activities. The same level of travel in Melbourne would naturally cost you much more money, so you would probably want to keep your budget a little tighter in Melbourne than you might in Darwin.


When is the best time to visit Darwin or Melbourne?

Should I visit Darwin or Melbourne in the Summer?

Both Melbourne and Darwin during the summer are popular places to visit.

Darwin is a little warmer than Melbourne in the summer. The temperature in Darwin is usually 29°C (83°F) in January, and Melbourne stays around 20°C (68°F).

In Melbourne, it's very sunny this time of the year. In the summer, Darwin often gets less sunshine than Melbourne. Darwin gets 173 hours of sunny skies this time of year, while Melbourne receives 271 hours of full sun.

Should I visit Darwin or Melbourne in the Autumn?

The autumn attracts plenty of travelers to both Darwin and Melbourne.

In the autumn, Darwin is much warmer than Melbourne. Typically, the autumn temperatures in Darwin in April are around 29°C (84°F), and Melbourne is about 15°C (60°F).

In Darwin, it's very sunny this time of the year. Darwin usually receives more sunshine than Melbourne during autumn. Darwin gets 267 hours of sunny skies, while Melbourne receives 170 hours of full sun in the autumn.

In April, Darwin usually receives more rain than Melbourne. Darwin gets 85 mm (3.3 in) of rain, while Melbourne receives 50 mm (2 in) of rain each month for the autumn.

Should I visit Darwin or Melbourne in the Winter?

The winter brings many poeple to Darwin as well as Melbourne.

In July, Darwin is generally much warmer than Melbourne. Temperatures in Darwin average around 25°C (77°F), and Melbourne stays around 9°C (49°F).

People are often attracted to the plentiful sunshine in Darwin this time of the year. In the winter, Darwin often gets more sunshine than Melbourne. Darwin gets 312 hours of sunny skies this time of year, while Melbourne receives 139 hours of full sun.

Darwin usually gets less rain in July than Melbourne. Darwin gets 1 mm (0 in) of rain, while Melbourne receives 43 mm (1.7 in) of rain this time of the year.

Should I visit Darwin or Melbourne in the Spring?

Both Melbourne and Darwin are popular destinations to visit in the spring with plenty of activities.

Darwin is much warmer than Melbourne in the spring. The temperature in Darwin is usually 29°C (85°F) in October, and Melbourne stays around 14°C (57°F).

It's quite sunny in Melbourne. The sun comes out a lot this time of the year in Darwin. Darwin usually receives more sunshine than Melbourne during spring. Darwin gets 291 hours of sunny skies, while Melbourne receives 216 hours of full sun in the spring.

In October, Darwin usually receives more rain than Melbourne. Darwin gets 76 mm (3 in) of rain, while Melbourne receives 62 mm (2.4 in) of rain each month for the spring.

Typical Weather for Melbourne and Darwin

Top 10 Experiences in and around Darwin, AustraliaThe Best Hostels in Darwin for Backpackers, Solo Travelers, and CouplesSydneyMelbournePerthAdelaide 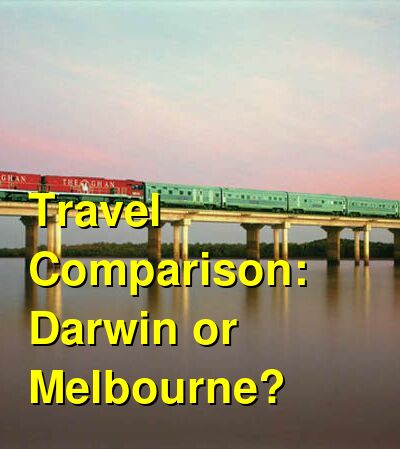