A Travel Comparison for Vacations, Honeymoons, and Tours India vs. Nepal

Should you visit India or Nepal?

Neighboring countries India and Nepal have similar cultures and low prices for travelers. But India, being much larger, offers a diversity of attractions. On the other hand, Nepal has created a unique culture of trekking in the Himalayas that is not found anywhere else in the world.

Nepal is a mountainous country that covers much of the Himalayas. In fact, this is the main reason why visitors come to this beautiful country. With expectations of hiking and climbing the worlds tallest mountains, visitors to Nepal usually find much more: a friendly culture full of history, religion, music, and great food. These cultural attractions often keep travelers in the country for longer periods of time than their initial plans, as after trekking the mountains, everyone agrees that Nepal has so much more to see than just Everest or the Annapurna Circuit.

Which country is cheaper, Nepal or India?

Should I visit India or Nepal? This is a popular question for many travelers. By figuring out which country is more expensive, you'll understand where you'll get more bang for your buck. A week in Nepal can cost you about $179 (per person), while a week in India may cost you around $207. These differences become even more noticable if you plan to spend a longer time in the country. 10 days, two weeks, or even one month of travel to Nepal or India can realy add to your travel budget.

When comparing food in India vs. Nepal they are not just different in cuisine, but also in price. Meal and restaurant costs in India ($6.59) are often cheaper than Nepal ($7.75).


How much are flights to India and Nepal?


Find a Hostel in India or Nepal

When is the best time to visit India and Nepal? 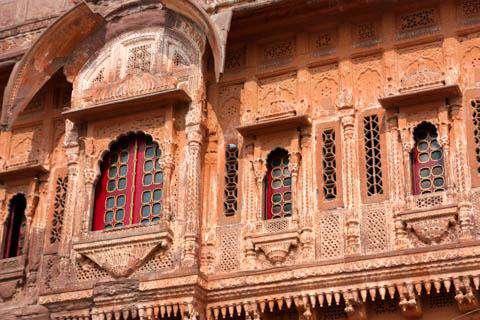 Mehrangarh Fort, Jodhpur, India
The weather in India is diverse as the country is geographically large. In the central and southern regions, from October to March is generally best as the temperatures are a little cooler and precipitation is at a minimum. During the summer months, the temperatures can get quite warm and the monsoon rains bring a great deal of moisture. However, in the far north, the Himalayan regions should be visited in the spring and fall as winters are cold and summers are extremely wet.

Trekking and hiking is best in Nepal (and the Himalayas in general) in the spring and fall. At these times, the winter snows are gone but the summer rains won't ruin your trip. At these times, the air is clear and crisp, and quite warm at lower altitudes and mild up in the mountains.

Expect other trekkers to be in the mountains at these times, however. Since it is considered dangerous to trek at other times of the year, the vast majority of visitors come at this time, raising prices and filling hotels and guesthouses.

What is the price of travel in India and Nepal?

India has one of the lowest costs of living in the world, yet rising wages and a growing middle class are causing prices to slowly rise. Combined with a massive population (the 2nd largest in the world), the low wages for most of the country mean that everything is still generally cheap, but as Indians travel within their own country, the travel industry is growing. The government encourages business growth, so local families often open small hotels or restaurants, adding to the overall competition for tourists.

Nepal has a very low overall cost of living compared to most countries in the world, or even most countries in Asia. Tourism and agriculture are two very important industries, leaving low wages and high competition for income, especially from tourists. Plenty of small, family-run hotels and restaurants, as well as other tour services, are available leading to a large amount of competition. It's even possible to find trekking guides by just walking down the street in Kathmandu or Pokhara, as the local people are often looking for extra work.

What are the most expensive and cheapest cities and regions in India and Nepal? 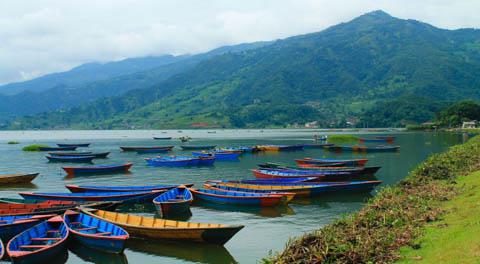 Pokhara, Nepal
While India is very cheap overall, touristy areas will usually be more expensive, as is the case in most countries. Agra, for example, is home to the Taj Mahal, one of the wonders of the world. As nearly every visitor to India comes to this city, expect prices for everything to be a bit higher, especially close to the main attraction.

Trekking in Nepal, while not overly expensive, can cost significantly more than staying in the larger cities. This is because much of the food and other goods needed in the mountains must be transported up by locals. At higher elevations, for example, food is not as readily available, and therefore costs more. And villages at higher elevations are less frequent and less populated, leading to less guesthouses (or "tea houses") to sleep in, driving up costs even more.

More luxurious accommodation is available in larger cities at higher prices, for those that desire it. However plenty of budget options are around for anyone looking for a cheap place to stay or a cheap place to eat. Those on a shoestring budget can stay in Kathmandu or Pokhara for long periods of time spending just a little money per day.

Royal Chitwan National Park can also see higher prices due to the remote nature of many accommodation options and the overall demand for visitors.

How you can save money when visiting India and Nepal?

Saving money in Nepal is quite easy. Shop around for everything and settle on a place (hotel, restaurant, or shop) that you find to be of acceptable quality for your budget. This is very easy to do in cities and towns.

While in Kathmandu, shop carefully for trekking gear. Some shops sell the real thing, while others sell knock-offs. Sometimes the knockoffs are actually the real thing, but they are just damaged and couldn't be sold abroad, making them a great buy. Other knock-offs are of poor quality and made by locals looking to make a quick buck. Either way, good deals can be found everywhere.

If the idea of a separate guide and a porter or two for your trek seems too expensive, it is often possible to hire a "porter-guide" instead. These are usually younger men who will carry your bag as well as act as a guide. They are more expensive than a porter, but cheaper than a guide, and they will speak English to help you along your route. Expect them to be not as experienced as the higher-end guides, however.