How much does it cost to travel to Delhi?

How much money will you need for your trip to Delhi? You should plan to spend around ₨2,463 ($32) per day on your vacation in Delhi, which is the average daily price based on the expenses of other visitors. Past travelers have spent, on average, ₨492 ($6.48) on meals for one day and ₨266 ($3.50) on local transportation. Also, the average hotel price in Delhi for a couple is ₨3,027 ($40). So, a trip to Delhi for two people for one week costs on average ₨34,487 ($455). All of these average travel prices have been collected from other travelers to help you plan your own travel budget.

A vacation to Delhi for one week usually costs around ₨17,244 for one person. So, a trip to Delhi for two people costs around ₨34,487 for one week. A trip for two weeks for two people costs ₨68,974 in Delhi. If you're traveling as a family of three or four people, the price person often goes down because kid's tickets are cheaper and hotel rooms can be shared. If you travel slower over a longer period of time then your daily budget will also go down. Two people traveling together for one month in Delhi can often have a lower daily budget per person than one person traveling alone for one week.


How expensive is Delhi?

How much does a trip to Delhi cost? Is Delhi expensive? The average Delhi trip cost is broken down by category here. All of these Delhi prices are calculated from the budgets of real travelers.

While meal prices in Delhi can vary, the average cost of food in Delhi is ₨492 per day. Based on the spending habits of previous travelers, when dining out an average meal in Delhi should cost around ₨197 per person. Breakfast prices are usually a little cheaper than lunch or dinner. The price of food in sit-down restaurants in Delhi is often higher than fast food prices or street food prices.

The cost of a taxi ride in Delhi is significantly more than public transportation. On average, past travelers have spent ₨266 per person, per day, on local transportation in Delhi.

How much does it cost to go to Delhi? Naturally, it depends on the dates. We recommend SkyScanner because they can find the best deals across all of the airlines.


How much money do I need for Delhi?

How much do tours to Delhi cost? Multi-day tours can often be an effecient way to see the highlights of a country or region.

Find a hostel, guesthouse, or B&B in Delhi

Delhi On a Budget 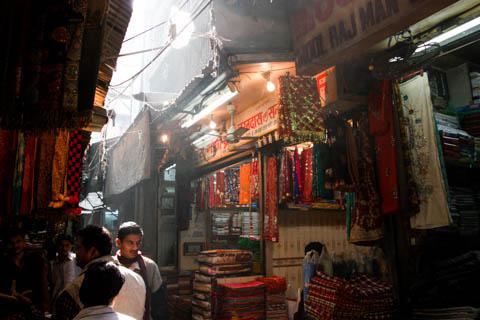 Textile Market, Delhi, India
Delhi is the largest city in northern India and is officially the country's capital. The city has a population of 11 million with the metropolitan population reaching over 16 million. The city is similar in landscape to the rest of its surrounding area. It is very flat with the river Yamuna flowing on the eastern side of the city. The Aravalii Hills are in the western portion of the city. The city's history dates back to the 6th century BC and it has served as a capital for various kingdoms and empires.

The climate in the area is quite extreme, making it difficult to determine the best time to visit the area. The weather can be unbearably hot between April and June. The monsoon rains hit the city between July and September so the roads can be flooded and traffic congestion impossible to navigate. It gets surprisingly cold in December and January and fog can be extreme. Most people generally agree the best time to visit the city is either between February and March or October and November when weather is at its most pleasant.

There are countless sights around the city. Some of the most famous include the Red Fort, Humayun's tomb, and Qutub complex. Museums in Delhi include Kiran Nadar Museum of Art, Gandhi Smriti, the International Dolls Museum, the National Museum, the National Railway Museum, Nehru Memorial Museum, the Tibet House, and the National Handicrafts and Handlooms Museum. Monuments in Delhi include Rajpath, the India Gate, Jantar Mantar, Raj Ghat, Purana Qila, Tughlaqabad Fort, and Azaad Hind Gram. There are also countless temples and religious sights spread throughout the city.

Delhi is a large and sprawling city. It can be divided into the six districts: South Delhi, East Delhi, North Delhi, West Delhi, Central Delhi, and Old Delhi. Central Delhi is where you'll find Connaught Place and Khan Market. Old Delhi was the capital during the Mughal period and has the Kashmere Gate, Chandni Chowk, and Chawri Bazaar.

Just walking around Delhi can be an experience in and of itself. There are interesting neighborhoods that are worth exploring and the city's colors, sights, and scents all make for an adventure.

One of the best experiences in Delhi is to visit the numerous shopping areas around town. These can be a great place to buy a souvenir from India. Head to the Chatta Chowk, or covered market, Connaught Place, Paharganj market, Rajouri Garden Market, or Lajpat Nagar which all offer unique experiences. Also make sure you sample a variety of different restaurants and street food stalls throughout town. Soaking up as much of India's culture as you can is really the best way to experience the city.

Food in Delhi is excellent. There are restaurants for all budgets. Street food is ubiquitous and delicious. Do make sure you find a place that prepares the food fresh and uses good hygiene practices. There are great restaurants in the Bengali Market near Connaught Place. This area is particularly known for its chaat. Chaat is a North Indian street snack that is comparable to tapas. They typically involve a deep fried pastry shell that is filled with potatoes or lentils among other things.

If you're looking for a break from Indian food, there are plenty of international restaurants around Delhi. Prices and food quality may vary. There are also a wide range of fast food restaurants including McDonalds, KFC, Subway, and Pizza Hut. These can typically be found within shopping malls.

India Bus and Train Prices
The best prices for buses and trains in India can be found on 12Go. They let you search across all bus, train, and airline routes throughout Asia.


You're likely to begin or end your trip in Delhi as the city has the area's largest airport, the Indira Gandhi International Airport. Security is tight after terrorist attacks in the country, so even if you have purchased an e-ticket, you will be required to have a printed copy of the document so that you can enter the airport. These rules are taken quite seriously.

You have many options to travel around Delhi. There's a good metro system that is relatively smooth and efficient, but it can get very crowded, particularly during peak hours. Do keep an eye on your belongings as pickpockets are abundant. It is best not to carry valuables in your pockets when you travel by metro. Other options to navigate the city include rickshaws, buses, and taxis. The bus system might seem overwhelming at first but if you have access to a good map it's a great way to reach most points around the city.

It's best to approach travel in Delhi as an adventure. The traffic is horrible and chaotic and trips may take significantly longer than you expect. If you plan to take a taxi or rickshaw, negotiating the price in advance is a must, and drivers may quote a starting price that is ten times the going rate.

By backpackguru in Accommodation
If you're a backpacker, you likely show up in places without reservations all the time. Delhi is one place you might consider booking in advance. It's a large, chaotic city, and while you can negotiate hard and get the best price, it's convenient to know exactly where you're headed when you first get there, particularly if you're arriving on a long flight. Taxis from the airport have a set price if you arrange inside the airport. Don't go with any taxi not officially marked.

When you depart from the Delhi airport, you must have a copy of you ticket, even if it's an e-ticket. Security is understandably tight, and guards require prove that you're booked on a flight before they let you enter the airport.