A Travel Price Comparison for Israel Jerusalem vs. Haifa for Vacations, Tours, and Honeymoons

Should you visit Jerusalem or Haifa?

If you're trying to decide where to visit between Jerusalem or Haifa, this travel cost comparison can help. The overall cost of travel is usually a consideration when deciding where to go next, and the cost comparison below can help you decide based on the average prices from other travelers along with your own travel budget.

Jerusalem is the capital city of Israel, as well as one of the most historically rich cities in the world. It is also the largest city in the country. While Tel Aviv holds many of the responsibilities of a capital city, officially, Jerusalem is still considered the capital. It is important to note that most countries have their embassies in Tel Aviv, not in Jerusalem.

Located on the northern Mediterranean coast of Israel, Haifa is Israel's third largest city. It is also a beautiful and strategically located city near the border with Lebanon. The population of Haifa, which is approximately 300,000, is surprisingly diverse. There are Jews, Muslim, and Christian Arabs throughout the city. While Haifa is an industrial city with a strong work ethic and a good job base, it is also a beautiful city with many gardens and a stunning coastline. Today the job base has increasingly become technology based with some large companies such as Google and Microsoft offering employment in the area. Haifa University is also the country's top technology university.

Which city is cheaper, Haifa or Jerusalem?

The average daily cost (per person) in Jerusalem is $86, while the average daily cost in Haifa is $113. These costs include accommodation (assuming double occupancy, so the traveler is sharing the room), food, transportation, and entertainment. While every person is different, these costs are an average of past travelers in each city. Below is a breakdown of travel costs for Jerusalem and Haifa in more detail.

A hotel room in Jerusalem is about $94 This assumes double occupancy and modest accommodations.

For a normal double-occupancy room in Haifa, $136 is the average cost for a hotel room. Also in Haifa, the typical price for a place to stay for one person is $68, such as in a hostel.

The average traveler spends about $28 per day in Jerusalem for food, but obviously this is dependent on the type of restaurant and the amount of food ordered. To save money you can grab a lighter lunch or dinner, or you can try fast food or street food.

Haifa food costs typically run travelers around $41 per day. Eating every meal in a nicer restaurant will drive the cost up, and grabbing fast food or casual meals will help you save money.

Some typical examples of dining costs in Jerusalem are as follows:

Also, here are some specific examples of food and dining related activities in Jerusalem.

For Haifa, here are some examples of average food and meal prices for travelers:

For Haifa, here are some samples of tours and activities related to meals and dining experiences:

To get around in Haifa, the average visitor spends $4.53 per day, per person. This includes the costs of taxi rides and private drivers as well as public transportation, which tends to be much more affordable.

Some typical examples of transportation costs in Jerusalem are as follows:

Hired Cars and Shuttles in Jerusalem

Some specific examples of transportation prices in Jerusalem:

Hired Cars and Shuttles in Haifa

Also for Haifa, here are a few examples of actual transportation services:

Is it cheaper to fly into Jerusalem or Haifa?

Prices for flights to both Haifa and Jerusalem change regularly based on dates and travel demand. We suggest you find the best prices for your next trip on Kayak, because you can compare the cost of flights across multiple airlines for your prefered dates.

Entertainment and activities in Jerusalem typically cost an average of $7.75 per person, per day. This includes fees paid for admission tickets to museums and attractions, day tours, and other sightseeing expenses.

In Haifa, the costs for things to do, activities, admission tickets, and other sightseeing expenses are on average $5.23 per person, per day.

Some typical examples of activities, tours, and entrance ticket prices in Jerusalem are as follows:

Tours and Activities in Jerusalem

Some specific costs of activities, tours, and entrance tickets for Jerusalem are as follows:

Tours and Activities in Haifa

For Haifa, here are a few prices for actual activities, tours, and tickets provided by various companies:

The average person spends about $14 on alcoholic beverages in Jerusalem per day. The more you spend on alcohol, the more fun you might be having despite your higher budget.

Some typical examples of the costs for nightlife and alcohol in Jerusalem are as follows:

Sample the Local Flavors in Jerusalem

Some specific costs for nightlife related activities in Jerusalem:

When we compare the travel costs of actual travelers between Jerusalem and Haifa, we can see that Haifa is more expensive. And not only is Jerusalem much less expensive, but it is actually a significantly cheaper destination. So, traveling to Jerusalem would let you spend less money overall. Or, you could decide to spend more money in Jerusalem and be able to afford a more luxurious travel style by staying in nicer hotels, eating at more expensive restaurants, taking tours, and experiencing more activities. The same level of travel in Haifa would naturally cost you much more money, so you would probably want to keep your budget a little tighter in Haifa than you might in Jerusalem. 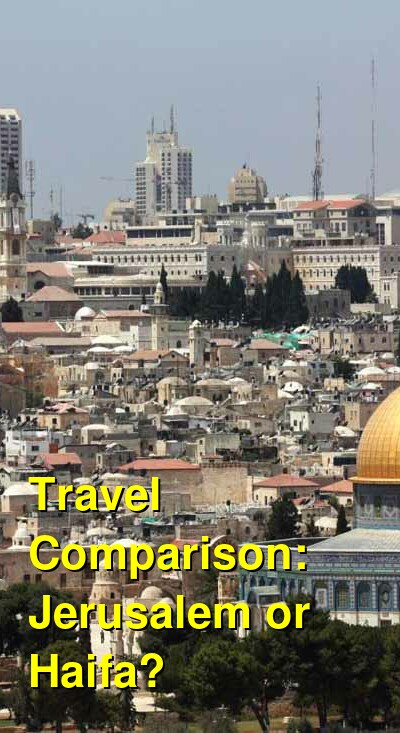