Should you visit Daytona Beach or Fort Lauderdale?

Trying to figure out where to travel next? This travel cost comparison between Daytona Beach and Fort Lauderdale can help. For many travelers, the cost of a destination is a primary consideration when choosing where to go.

Daytona Beach, Florida is a small city located on the Atlantic Ocean side of the Floridia coast. It is a wildly popular tourist destination for people all over the world due to the beaches and NASCAR races. Tourists come to enjoy the sunny weather, the beautiful beaches, and many other things the city has to offer. The beaches in Daytona are famous for their hard-packed sand, which makes them excellent for vehicles for drive on. For this reason, Daytona has a history of automobile racing, and is home to dozens of races that take place throughout the year - the most famous of which is the Daytona 500. Naturally, Daytona is also home to NASCAR headquarters.

Which city is cheaper, Fort Lauderdale or Daytona Beach?

The average daily cost (per person) in Daytona Beach is $169, while the average daily cost in Fort Lauderdale is $146. These costs include accommodation (assuming double occupancy, so the traveler is sharing the room), food, transportation, and entertainment. While every person is different, these costs are an average of past travelers in each city. Below is a breakdown of travel costs for Daytona Beach and Fort Lauderdale in more detail.

In Daytona Beach travelers spend around $64 a day on food. You can save money by choosing casual restaurants or food stalls, or you can spend plenty more by dining in nicer restaurants at every meal.

The average traveler spends about $39 per day in Fort Lauderdale for food, but obviously this is dependent on the type of restaurant and the amount of food ordered. To save money you can grab a lighter lunch or dinner, or you can try fast food or street food.

Some typical examples of dining costs in Fort Lauderdale are as follows:

Entertainment and activities in Daytona Beach typically cost an average of $22 per person, per day. This includes fees paid for admission tickets to museums and attractions, day tours, and other sightseeing expenses.

Here are a few actual costs in Daytona Beach for available activities, ticket prices, and tours:

Some specific costs of activities, tours, and entrance tickets for Fort Lauderdale are as follows:

The average person spends about $27 on alcoholic beverages in Fort Lauderdale per day. The more you spend on alcohol, the more fun you might be having despite your higher budget.


When comparing the travel costs between Daytona Beach and Fort Lauderdale, we can see that Daytona Beach is more expensive. However, the two cities are actually relatively comparable in price, as the difference is somewhat minimal. Generally, this means that you could travel with generally the same travel style and level of luxury in each place. Since both cities are in North America, it's no surprise that their costs are relatively close, as many destinations here have somewhat similar travel prices overall. 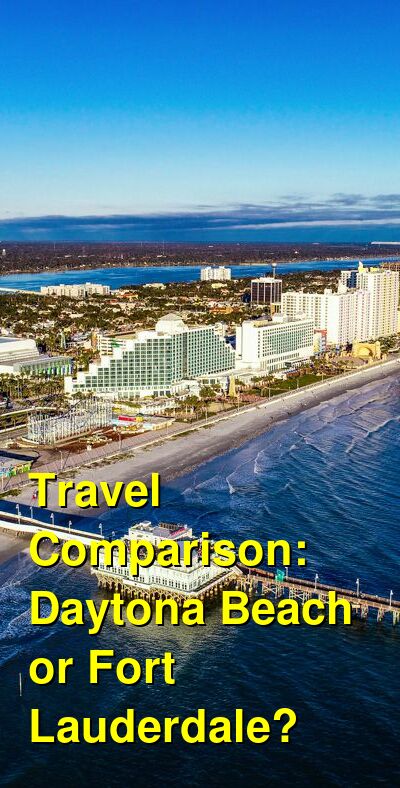