A Travel Price Comparison for Greece Kalampaka (Meteora) vs. Delphi for Vacations, Tours, and Honeymoons

Should you visit Kalampaka (Meteora) or Delphi?

Which city should you visit? Read on to compare the activities as well as the prices of travel for Kalampaka (Meteora) and Delphi. We'll break down costs for accommodation, food, transportation and more to help you learn more about these two destinations. Then, you can figure out if either of these two places are accessible based on your travel budget, schedule, and interests. So, let's dig into it.

Proclaimed to be the center of the world by the ancient Greeks, Delphi and its ruins exist on the sloping mountainside of Mount Parnassus. With breathtaking views just over the cliffs, one cannot help but marvel at the sweeping valley dotted with olive trees all the way down to the sea. The beauty of it all truly brings one to a place where they understand why Delphi was marked as the center of the earth.

Which city is cheaper, Delphi or Kalampaka (Meteora)?

The average daily cost (per person) in Kalampaka (Meteora) is €107, while the average daily cost in Delphi is €82. These costs include accommodation (assuming double occupancy, so the traveler is sharing the room), food, transportation, and entertainment. While every person is different, these costs are an average of past travelers in each city. What follows is a categorical breakdown of travel costs for Kalampaka (Meteora) and Delphi in more detail.

Hired Cars and Shuttles in Delphi

Also for Delphi, here are a few examples of actual transportation services:

Is it cheaper to fly into Kalampaka (Meteora) or Delphi?

Prices for flights to both Delphi and Kalampaka (Meteora) change regularly based on dates and travel demand. We suggest you find the best prices for your next trip on Kayak, because you can compare the cost of flights across multiple airlines for your prefered dates.

Tours and Activities in Delphi

Also, here are some specific examples of entertainment, tickets, and activities for Delphi. 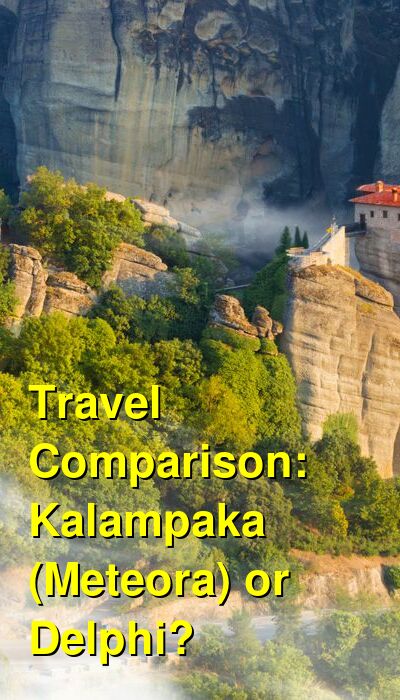