How much does it cost to travel to Kalampaka (Meteora)?

Looking for a hotel in Kalampaka (Meteora)? Prices vary by location, date, season, and the level of luxury. See below for options.

How much does it cost to go to Kalampaka (Meteora)? Naturally, it depends on the dates. We recommend Kayak because they can find the best deals across all airlines.

The price of renting a car in Kalampaka (Meteora) will depends on dates, the type of car, the location, and your age. We recommend Kayak because they can find the best deals across all car rental companies.

Kalampaka (Meteora) On a Budget 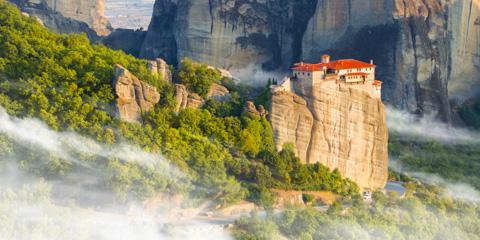 Monastery of the Holy Trinity, Meteora, Greece
Looking over the town of Kalampaka are some of the largest and most important Eastern Orthodox monasteries in Greece. They sit at the tops of gigantic natural sandstone pillars of rock, jutting of the landscape like meteors from the sky. This place is called Meteora. While the tall mounds of earth are impressive themselves, it is a wonder how man had the ability centuries ago to create the structures that remain on the cliffs today.

While monks originally sought the solitude and peace of the caves found here, they eventually began to build monastery communities from the 14th to 16th centuries. While only 6 of the original 24 monasteries still remain, each have areas open to the public to be explored and admired by visitors

The Meteora monasteries have been included in the UNESCO World Heritage List, offering spectacular views in addition to the rich history, geological wonder, and culture that exists in the monasteries today.

Of course, the main attractions of Meteora are the monasteries. The six remaining include:

While the monasteries range in size and history, each are beautiful in their own way with unique views around every bend. Some are easy to reach with parking lots right at the entrance, while others are strenuous treks up cliff sides and over bridges. Whether you choose to visit one or two, or take the pilgrimage to all six, the monasteries of Meteora offer a one of a kind experience on awe-inspiring cliffs near the heavens.

The nearest town is Kalampaka, located at the foot of the Meteora peaks. It is here where you will find places to stay, restaurants, tavernas, bakeries, groceries, shops, and cafes. Located in the Trikala region of Thessaly, Kalampaka was voted as one of the most beautiful places in Greece by the Skai TV show "I LOVE GR." While the views from the cliffs overlooking the red-roofed town are breathtaking in their own right, the views from below in Kalampaka itself are amazing in another way. The surrounding pillars, so massive and striking, make the town feel small and quaint in a land of giants.

There are many hiking excursions and tours available to take tourists up to the monasteries. One of the most popular is the sunset tour from Kalampaka. This excursion takes visitors off the beaten path in the late afternoon, displaying some of the best views on the peaks of Meteora. The tour ends on a rock outcropping overlooking the valley as it is washed in the golden glow of sunset. Other outdoor activities in the area include horseback riding in the countryside region, rock climbing on the great Meteora pillars themselves, and even rafting along the river Ionis.

The Natural History Museum of Meteora and Mushroom Museum offers a different kind of attraction for the nature enthusiasts out there. With 350 species of birds and mammals, as well as around 250 species of mushrooms, the museum has more than enough to occupy visitors for the day. There is even a painting exhibition of local artists, supporting the museum's mission to connect nature with the local cultural activity and heritage.

One archaeological attraction worth the visit is the Prehistoric Theopetra Cave, located just 4km from Meteora. Studies in this cave have revealed the oldest manmade structure, as well as footprints that may date back to 135,000 B.C. When it comes to history, this little cave tops the charts.

As far as food goes in Greece, you really can't go wrong. The town of Kalampaka at the base of Meteora will have all of your dining needs from restaurants, tavernas, and pizzerias, to pastries, coffee, and drinks. Traditional Greek cuisine is available at places like Archontariki and Gardenia tavern, while a place like Chicken Time on Trikalon Street serves quicker take-away items like pizza and pita gyros. If you plan on rising early, especially on a weekend, be aware that most places will not yet be serving. There is one place called El Greco that may be open, serving fresh squeezed orange juice, coffee, and toast.

One can get to Meteora from Athens by car, bus, or train. Driving from Athens can take 4 to 5 hours depending on traffic (GPS is VERY helpful).

The bus from Athens is located near the Kato Patissia station. From here you should get a bus to Trikala, which is the big city near Kalampaka and Meteora. Once you get to Trikala you can catch a bus to Kalampaka.

The train might be the easiest way to go. First take the red line metro towards Anthoupoli and get off Larissa Station where you will find the train to Kalampaka. Kalampaka is a terminal station, meaning that if you get on a direct train you won't have to worry about getting off at the right station because it will be the last one. Be aware that some trains change routes, so make sure that the train you board is direct.