How much does it cost to travel to Dubrovnik?

How much money will you need for your trip to Dubrovnik? You should plan to spend around kn578 ($75) per day on your vacation in Dubrovnik, which is the average daily price based on the expenses of other visitors. Past travelers have spent, on average, kn192 ($25) on meals for one day and kn75 ($9.63) on local transportation. Also, the average hotel price in Dubrovnik for a couple is kn602 ($78). So, a trip to Dubrovnik for two people for one week costs on average kn8,096 ($1,044). All of these average travel prices have been collected from other travelers to help you plan your own travel budget.

A vacation to Dubrovnik for one week usually costs around kn4,048 for one person. So, a trip to Dubrovnik for two people costs around kn8,096 for one week. A trip for two weeks for two people costs kn16,192 in Dubrovnik. If you're traveling as a family of three or four people, the price person often goes down because kid's tickets are cheaper and hotel rooms can be shared. If you travel slower over a longer period of time then your daily budget will also go down. Two people traveling together for one month in Dubrovnik can often have a lower daily budget per person than one person traveling alone for one week.


How expensive is Dubrovnik? How much money do I need for Dubrovnik?

How much does a trip to Dubrovnik cost? Is Dubrovnik expensive? The average Dubrovnik trip cost is broken down by category here. All of these Dubrovnik prices are calculated from the budgets of real travelers.

Looking for a hotel in Dubrovnik? Prices vary by location, date, season, and the level of luxury. See below for options.

How much does it cost to go to Dubrovnik? Naturally, it depends on the dates. We recommend Kayak because they can find the best deals across all airlines.

The price of renting a car in Dubrovnik will depends on dates, the type of car, the location, and your age. We recommend Kayak because they can find the best deals across all car rental companies.

What did other people spend on Transportation in Dubrovnik?

Typical prices for Transportation in Dubrovnik are listed below. These actual costs are from real travelers and can give you an idea of the prices in Dubrovnik, but your costs will vary based on your travel style.

What did other people spend on Food in Dubrovnik?

Typical prices for Food in Dubrovnik are listed below. These actual costs are from real travelers and can give you an idea of the prices in Dubrovnik, but your costs will vary based on your travel style.

What did other people spend on Entertainment in Dubrovnik?

Typical prices for Entertainment in Dubrovnik are listed below. These actual costs are from real travelers and can give you an idea of the prices in Dubrovnik, but your costs will vary based on your travel style.

Dubrovnik On a Budget 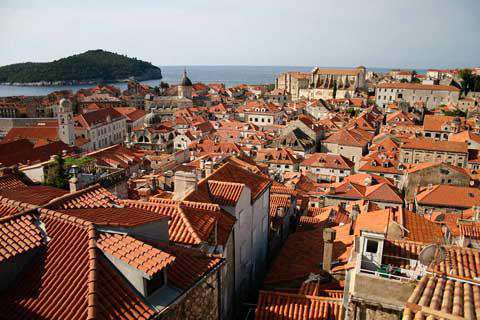 Dubrovnik
Dubrovnik, the "Pearl of the Adriatic", is a beautiful walled city in southern Croatia that sits on the edge of the Adriatic Sea. It's a small city, with only about 40,000 residents, but it's become one of the most significant tourist destinations in the Mediterranean. It is also a UNESCO World Heritage Site.

There are many historic sights spread throughout the Old Town. Some of the most famous include the Bell Tower, Roland's Column, Sponza Palace, Rector's Palace, Pile Gate, Placa Stradun, Big Onofrio's Fountain, Old Port, Fort Lovrijenac, and Visia Dubrovnik 5D Theatrum. Famous churches include Franciscan Monastery, Cathedral of the Assumption of the Virgin Mary, Church of Saint Blaise, Church of St. Ignatius and the Jesuit College, Dominican Monastery, Church of St. Sebastian, and Serbian Orthodox Church Museum of Icons.

Most people visit Dubrovnik specifically for its Old Town. This is the area enclosed by the historic walls. Here you will find most of the city's main attractions and sights. There are many historic buildings with interesting architecture and histories. There are also many great restaurants, cafes and shops, many of which cater to tourists. The main street of Old Town is Stradun-a, which is just under half a kilometer long. It runs from Pile Gate at the west entrance, to Ploce Gate at the east entrance. It's lined with many shops and restaurants.

Ploce is the neighborhood that is just outside of Ploce Gate. It is where you will find some of the city's nicest hotels, many of which are on the waterfront. There is a public beach available here as well, called Banje, where you will find the EastWest Beach Club.

Lapad is the peninsula that is west of Old Town. There is a wide, pedestrian only street that has many hotels and restaurants, but other than that there is little to see or do as a tourist. There is a residential area and some beachfront. The hotels in the area are mid range in price and there are several buses that connect the area with Old Town.

The Banin Kuk neighborhood is found on the Lapad Peninsula. It has a variety of hotels across several different price ranges and a few restaurants and shops. From here you can also access some of Dubrovnik's pebbled beaches. You can reach the Old Town area by bus from here as well.

Interesting activities around Dubrovnik include hanging out at the nearby beach, sailing, boat tours, taking the newly reopened cable car up the mountain, and cliff jumping.

Kayaking provides a terrific opportunity to see the walled city and nearby islands from the water. With a Sea Kayaking tour from Dubrovnik, visitors can spend a few hours out on the water, enjoying the scenery, and getting some exercise.

Popular festivals in the city are the Dubrovnik Summer Festival and the Libertas Film Festival.

Local seafood and traditional meat dishes are available at most of the restaurants around Old Town. The dishes are usually fresh and good, and prices are reasonable. There are some cheaper, touristy places that vary in quality, but will give you a filling, cheap meal. The other alternative is the higher end, fine dining restaurants. These offer interesting, high quality meals for a more expensive price. There are also some pizzerias around that have decent pizza that is reasonable in price. Because Dubrovnik is such a popular tourist destination, you can expect to pay more for a comparable meal than you would elsewhere in Croatia. If you're in town during the low season between November and March, most of the high end restaurants are closed. The touristy eateries that remain open will charge a high price for low quality food. It is possible to negotiate the price, and it is recommended that you try.

Although the Old Town is a network of small streets that can be difficult to navigate, a good system of signs make it easier to find your way than you might expect. There are signs advertising businesses and attractions at most major intersections. The entire Old Town is pedestrian, and it is easy enough to walk around.

Many people end up staying outside of Old Town, and most neighborhoods are connected by bus. Almost all buses eventually end up in the Old Town, but some take more direct routes, so you should find a timetable and route map just in case. Day passes are available for buses as well. If you're making your way from the Main Bus Station to the Old Town you can take buses 1, 1A and 1B. These buses run constantly.

By wanderinggurl in Accommodation
Make sure you stay in the old town in Dubrovnik, Croatia. It's part of the experience. Pay a little extra and stay in a convenient location near everything in town.