How much does it cost to travel to Split?

How much money will you need for your trip to Split? You should plan to spend around kn659 ($103) per day on your vacation in Split, which is the average daily price based on the expenses of other visitors. Past travelers have spent, on average, kn141 ($22) on meals for one day and kn87 ($14) on local transportation. Also, the average hotel price in Split for a couple is kn886 ($138). So, a trip to Split for two people for one week costs on average kn9,232 ($1,442). All of these average travel prices have been collected from other travelers to help you plan your own travel budget.

A vacation to Split for one week usually costs around kn4,616 for one person. So, a trip to Split for two people costs around kn9,232 for one week. A trip for two weeks for two people costs kn18,464 in Split. If you're traveling as a family of three or four people, the price person often goes down because kid's tickets are cheaper and hotel rooms can be shared. If you travel slower over a longer period of time then your daily budget will also go down. Two people traveling together for one month in Split can often have a lower daily budget per person than one person traveling alone for one week.


How expensive is Split? How much money do I need for Split?

How much does a trip to Split cost? Is Split expensive? The average Split trip cost is broken down by category here. All of these Split prices are calculated from the budgets of real travelers.

Find a hostel, guesthouse, or B&B in Split

How much does it cost to go to Split? Naturally, it depends on the dates. We recommend SkyScanner or Kayak because they can find the best deals across all airlines.

Tips and Handouts Budget in Split

Split On a Budget

Split, Croatia
Spit is a historic city in Central Dalmatia with many opportunities to glimpse its fascinating past in its historic city center. Centuries ago the city grew up around a Diocletian palace that was used as refuge by the locals.

There is really no shortage of sights in Split. You could easily fill a few days wandering through the historic sights and exploring the city's many museums and churches. Some of the most famous sites in the city include Saint Duje's Cathedral, Peristil Square, the Archaeological Museum, Diocletian's Palace, and Poljud Stadium.

Perhaps the two most notable neighborhoods in Split for tourists are Veli Varos and Radunica. They sit on opposite sides of the historic core and each is charming in its own way. These are considered the oldest suburbs of the city.

Veli Varos is found just above Trumbiceva Obala Street and to the west of Riva. There are many winding roads that lead into the neighborhood and once you're inside it's easy to get lost. The neighborhood has a lot of personality and is known for it's stone houses, narrow streets, and historic churches. It' has the feel of an island village because it was developed by fishermen and farmers who came to Split to escape the Ottoman invasion. Today the real estate market in the neighborhood has grown and there are many luxury apartments and homes.

Just to the east of the city is Radunica. It's across the street from the vegetable market and was originally settled by peasants from the Republic of Poljica about 500 years ago. Today Radunica is famous for it's street festival "Days of Radunica", which was first begun in 1994. It's held during the last week of June every year and is known for it's folk atmosphere with klapa performances, traditional bingo, poetry, and more.

Popular activities in Split include taking a swim on the beach at Bacvic, climbing the Campanile Bell Tower, going snorkeling, visiting the Green Market or taking a sailing trip. You can also take a tour of the Diocletian Palace. It lasts about an hour and half and is well worth the visit.

About an hour's walk from the Diocletian Palace is the St. Jeronimus caves and church. It sits on Marjan Hill and is a great place to visit with a beautiful view. It's worth the trip if you have time.

Restaurants around town are generally delicious, and there are a handful of local specialties you should make a point of trying. Perhaps the most popular is Soparnik, which is a baked dough filled with vegetables. It's delicious and filling. There's also a lot of Italian influence on the cuisine and you will find some great risotto and pasta options around town. Gnocchi is another local specialty that is quite good.

Also make a point of trying the great wines that are available. There are plenty of bars around town, and generally the wine found in restaurants is a very high quality.

With its wonderful climate, the best way to explore Split is really on foot. The city center, where you'll find most of the sights, is quite compact and walkable. If you want to venture to further destinations there is a good bus system you can use. There's also a frequent bus which connects the airport to the city center. Another fun option is to rent a bike for the day and explore the surrounding areas. Cycling in the area is quite pleasant and relaxing. If you do decide to rent a car, there are a few good rental companies around town that will offer you a good deal. 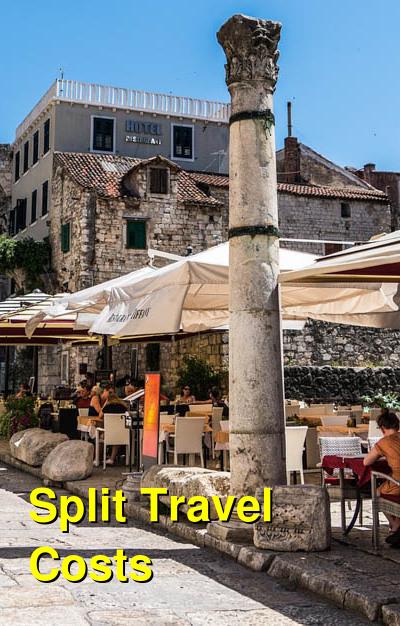 The Beach A Bačvice

By backpackguru in Entertainment
The beach at Bačvice is a great place to soak up some sun and take a dip in the ocean. You can get here by heading south alongside the waterfront passed the bus station then head along the road that crosses the railway line. You can grab some food at a cafe and perhaps some ice cream nearby. While it's a crowded beach, and maybe not the best in Croatia, it's a great place to intermingle with the locals who make up the majority of the visitors.